It was time to try out the Teamelite in a race setting. The event was the fifth race of Slushcup. The premises were a couple of degrees below freezing. The ground was supposed to be hard and frozen. As I didn't prioritize this race very highly I decided on using my training wheels and training tyres. The Bontrager XR2 2.2 are wide but have very little in the way of grip.

A test ride of the track proved that it was 90% twisty and turny single track. Great fun in other words! It was supposed to have some 250 altitude meters per lap (7km) but that turned out to be an exaggeration on the part of the organizers. In reality it was about half that.

I made a better start than I had in many races and I was actually leading my class for a while during the start loop and first lap. Soon, however Palle passed me taking some other M40 guy with him.

The bike felt superb on the track: Supple and managable through the tight turns and in between trees. The soft tail helped a bit; I was running the softest of the bushings in the back. A note about that: I had been using the softest of the bushings during most of my training rides as I wanted the full effect of the "soft tail". Now, however, during the race, perhaps I got a bit too much flex when I really got the power on. I'm not sure if this is just a feeling or actually physics at work. It felt a bit flexy when I got out on gravel road and accellerated under full power. At the same time the course was rather rooty and the soft tail really helped there. I may try the medium bushing for the next race just to get another reference.

The first couple of laps went well as the ground was frozed hard and grip was good. However after a while with a couple of hundreds of riders lapping it got more and more muddy and my Bontrager XR2 tyres started showing their lack of grip.

A couple of the guys passed by, Henrik Söeberg among them. I was very tired during the last lap but I managed to hold my position and finished in fifth place. This is the best position I've had during this season's Slushcup so I'm happy. Heart rate data looked great as well with an average pulse of 175 and a max of 188. 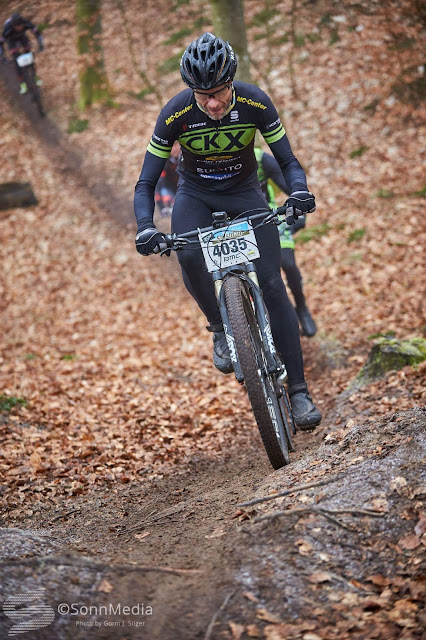 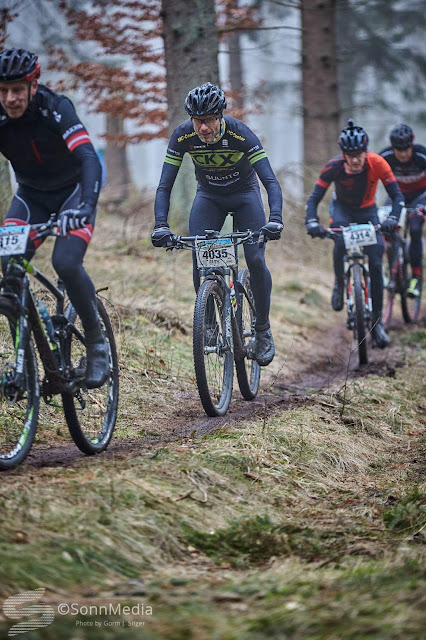 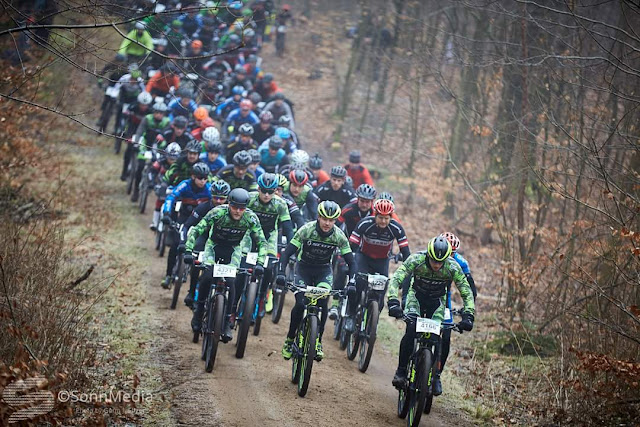 Posted by Alexander Lapajne at 22:30 No comments:

I'm joining a new team for the race season of 2016: Scuderia BikeItaly BMC (blogg). Our two main sponsors is the Swiss bike manufacturer BMC and our local bike shop BikeItaly. The team has some great riders whom I will be mentioning in my reports. My partner, Sandra Backman, is also joining the team.

The season's two race bikes will be BMC TeamElite 01 XX1, which is BMCs new "softtail" and a full suspension BMC Fourstroke XX1

Weather conditions in Sweden have not been the best so even though I got the full susp in December and then the softtail in January I've had just a couple of rides on each and the snow and mud have made it hard to get a good impression. This weekend, however, under relatively dry conditions, I was able to take the Fourstroke out for two marathon sessions, four and five hours respectively.

I wasn't sure what to expect from this bike... This is my third full-suspension race bike. I have gone from racing an Specialized Epic S-works in 2014, to a Trek FS Superfly SL in 2015, and now to the BMC Fourstroke XX1. So I do have some reference points.

On Saturday's marathon ride it took all but 30 minutes before I had totally fallen for the bike. I was IN LOVE. Perhaps you're thinking: "Well, of course you're in love with your brand new shiny top-of-the-line bike.". But it has not always been like this. When I switched from the Epic to the Superfly my first reaction wasn't positive. The Trek turned out to be great, but at first it felt a bit slow to turn in and somewhat dull to ride. So all I'm saying is that change doesn't always feel positive for me... not at once at least.

The Fourstroke is a superb bike. My immediate reaction is how supple it is on the downhills and through turns. It inspires confidence. You want to lean the bike into the corners and let it just do its thing. There's a special section that I have on my local course where there's a trail going downhill over some serious pumps and then turns through a couple of tight turns. In order to get through the turns with speed the bike has to be ballanced over the bumps. If the bike starts bouncing around it gets light and you lose traction. The Fourstroke absorbs the bumps perfectly and allows me to lean the bike into the corners with maximum grip. No other bike that I've ridden there has felt as surely planted.

Thank you BikeItaly for supplying me with this lovely bike.

The BMC Teamelite 01 is BMC's new "softtail". This means that the rear flexes a little bit. So you get a slightly heavier frame (just 100 grams or something) in exchange for a more compliant ride.

With the Teamelite you get three different kinds of bushing to use in the back. They all have different stiffness. I first tried the medium one but quickly switched to the soft one. The flex in the back is not noticeable when climbing or accelerating but you notice it absorbing the impact of bumps. It's not like a full suspension bike where you can sit down through everything but it smoothes out some of the roughness of the terrain. 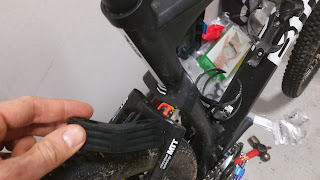 The other thing that's special with BMC is the short stem (and therefore longer top tube). It makes the bike very quick to steer and it feels very nimble and also fun to ride. You through it into turns and it reacts immediately. 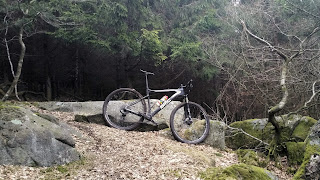 So far I'm really happy with the Teamelite. I still haven't raced it so I am still looking forward to that experience and what insight into the bike that it will give me.

Posted by Alexander Lapajne at 21:49 4 comments:

It seems that I'm the poster boy for Alpe Adria 2016

Here's my blog entry about the race 2015 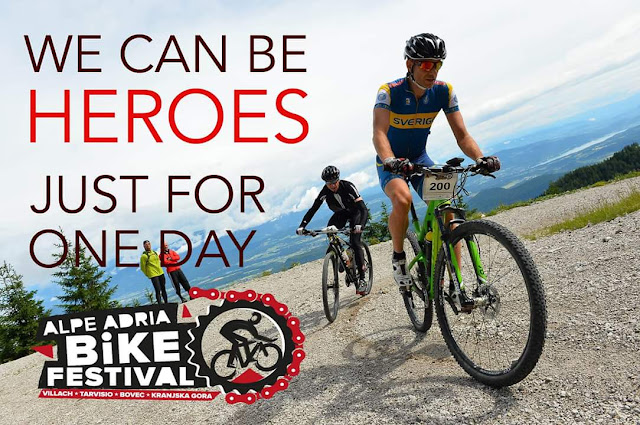 Posted by Alexander Lapajne at 13:11 No comments:

The trophy from last season's Slushcup

Last season's Slushcup (2014/2015) went really well and I managed winning my category over all. I was the first non-Dane ever to do so. They let me borrow the trophy for some photos. My name is engraved in the list of winners since the beginning of the cup 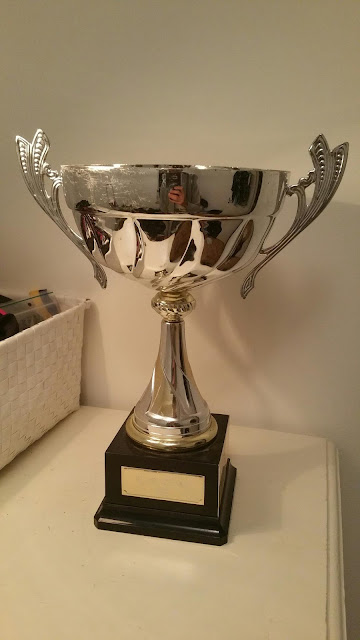 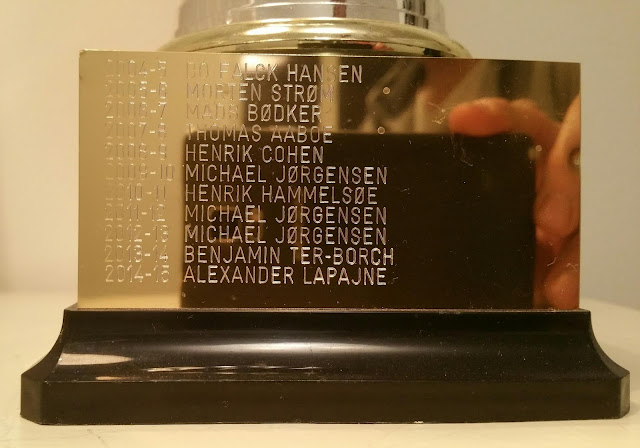 Posted by Alexander Lapajne at 07:31 No comments: