Västgötaloppet is the nineth and last race in Svenska Långloppscupen. It's a late adition to the cup, only joining it last year. It's also one of the quickest (least technical) of the races. The terrain suites me and I did well in it last year. There's quite a lot of gravel road racing with some good climbs. The starting climb is long and hard and the last 10km is mostly uphill. This year we were promised 40% more singletrack than previous years. This was good!
My form had been rather bad lately and so my motivation was quite low too. I had gained a couple of kilos while working in London during last week. My lacking motivation was noticable in the fact that I did not race-prep my bike and also was quite casual with my training in the week leading up to the race: I just commuted by bike every day during the week.

The race started and we immediately started climbing up the first long uphill section on asphalt. I soon noticed that a gap had opened up to the lead group and I accelerated to join them. Once I got with the group I noticed that Martin Wenhov was at the tail of it. Very impressive as Martin previously had some problems with races where the climb started early on. The climb continued on gravel roads and the front group started to split up. I was somewhere in the middle, ahead of Martin but I also saw some other guys go off the front.

After a while the climb turned into level single track and then a slight downhill over grassy and muddy single track. The pace was quick and I was trying to stay with the guy in front of me. I came on the brakes at one point and directly noticed that there was absolutely no grip and my rear wheel started drifting to the right at once. I tried releasing the brakes in the hope that the wheel would get back in line but it was too late: the rear wheel slipped and I found myself on my back. The fall was quite light but I was worried about getting run over from behind. I got up quickly and noticed that Martin passed me. However I was able to rejoin at the back of the group.

Once out of the single track section we got onto quick gravel roads and the pace got really frantic. I passed Martin at some point and then never saw him again. We had a group of some 10-15 riders, I was at the back of it. I noticed that Rolf Svensson was there. Being in a group with Rolf is always a good sign: He's one of the quickest riders so if he's around that means you're going quickly, also Rolf never ever gets tired so he's a good wheel to follow.

Shorter single track sections followed and mixed up with new parts of gravel roads. Short and frantic climbs. The group got smaller and smaller and we caught up with riders. Rolf was there all the time doing the hard work pulling the group along. I knew that my form was not good and my only hope was to stay with this good group as long as I could, and once I was too tired I would let go and hope that the damage of riding alone would not be too great. I had no hope of following Rolf all the way to the finish, especially as I knew that the last few kilometers were mostly up hill.

At about 20km into the race we passed Robert Eliasson who was standing at the side of the road fixing his bike. I felt sad for him as I knew he had to place well in this race to keep his third place in the total cup standings.

After 40km we came back to the start-finish area to go to the next loop. At this point I was at the front of our group but there were two young riders also there who were driving real hard. After leaving the stadium I had to let them go. I wasn't quite sure where the riders behind me were but soon some of the guys caught up and we were a group of some 6-7 riders again. Rolf was there, of course.

Having looked at the altitude profile before the race I understood that the hard part would be comming up with about 10-15km left of the race. Now, as we reached that point and started climbing on the gravel roads there was just me, Rolf and another guy. I was at the back. I fully expected to get dropped but I managed to cling on. Rolf holds a very steady and even pace making it easy to hold his wheel.

Somewhere around here we also caught up with a rider with the number 450 on his back  (M40 category). He had been with our group previously but had gone off the front when a couple of young elite riders had increased the pace. Now he was with us again.

At the quary with just some 5-6 km to go we caught up with Mikael Johansson. Now, afterwards when looking at the results, it is clear that this was the leading four guys in the M40 category: The guy with 450 on his shirt, Rolf, Mikael and I.

In the last few kilometers up towards the finish we keps more or less together, however I lost sight of 450. I still, today, don't know when he left us.

At the last climb, with just 2km to go there were just three of us: Rolf is first, then me, and Mikael  behind me. Mikael comes around both of us and sprints up the hill. I try to accellerate but the back side of my right thigh starts to show signs of cramp. I have to ease off. Rolf also speeds up, he's not able to follow Mikael, but he starts getting away from me. At the top of the climb Mikael has gone away, and Rolf is perhaps 30 meters ahead of me.

The last kilometer towards the finish is on grass and some quick short climbs. I give it my all, and to my surprise, I start getting closer to Rolf. After a while I catch him and decide to start my sprint early: I go straight past him. I don't look behind so I have no idea if he takes my wheel. I sprint for the finish and just have a quick look behind with 100m left. I seem to have a slight gap.

I cross the line 1 second ahead of Rolf, 19 seconds behind Mikael and about a minute behind 450. I'm in third place! After three years of racing in the Swedish Långloppscupen I finally got on the podium! 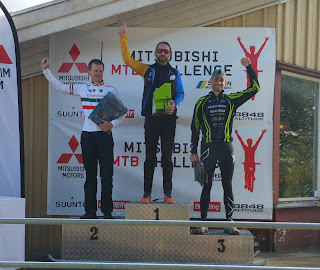 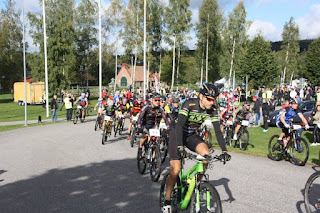 Posted by Alexander Lapajne at 14:33