Ränneslättsturen is the fourth race in the Swedish Marathon series. I had only done the first one, Billingeracet, where I finished second. Then the next two races took place while I was away racing the Beskidy Trophy and Four Peaks. So I missed those. I had high hopes for Ränneslätt.

Ränneslättsturen is one of the few races in the Swedish Marathon MTB Cup that does NOT have a long starting hill. This always causes a lot of chaos in the start. The first 10k of the race are on (level) gravel roads. High speeds and tightly bunched riders create dangerous situations.

Apart from the lack of starting hill it's a good cup race as it contains a lot of singletrack.

The first part of the race is on gravel roads. It's all flat. And this means high speeds. There are a few turns where you need to be well placed in the field. The tight right turn at 3km being especially tricky. The gravel roads continue for a while but gradually turn into dubble track where overtaking is a bit more tricky.

The last 30km of the race also has some singletrack, but it's not as technical as that middle part that I just mentioned, and it's mixed up with gravel roads.

I knew in advance that I would have to be very aggressive in this race in order to stay with the quick groups out in front. Being a flat race with a gravel road start it would be easy to hang on to other riders... IF I was in a good position. I was in the first starting group which meant I only had some 20-30 riders to share the front box with. Behind me were some 1200 riders.

Almost as soon as the start went the rider in front of me had some problems getting his shoes in the pedals and I got stuck behind him. People were advancing left and right in spite of the pace care in front (overtaking wasn't allowed). Then, in the first tight left turn I took the wrong line. I kept falling backward and losing places. This was the sort of start that I had dreaded.

When we got to the double track I started making up ground, sprinting from group to group. While this went well it also took a lot of energy.

As we got to the long singletrack section which pretty much goes from 20km to 48km I understood that I needed to slow down a bit and start to conserve my energy. I still managed to jump a few groups, but then, at 32km my front wheel slipped on something and I went down. I got up pretty quickly and noticed that the group that I just had passed had gone past me and I started sprinting to catch up with them. I managed to do so but it cost a lot of energy.

When we got to the really twisty and turny part of the Enduro track (I think that's what they call it) I had a good group of four riders. I hung onto the last guy for dear life. It went really quickly and I needed to use all the energy that I had left just to stay in touch. However, as we started catching a group ahead of us I understood that we were going at a really good pace.

As we got out of this section and with about 30km to go a group had formed with two other M40 riders, an M30 rider and one Elite guy. Here I started planning my strategy: How was I going to finish ahead of my two M40 rivals? The Elite guy was really helpfull and pulled hard on the gravel road sections. Very nice of him! The two M40 guys also seemed strong and set a good pace when they were at the front. At the short climbs (and I mean really short, there are no long ones in this race) I was able to hold my own or sometimes pull ahead slightly. I tried to use these climbs to tire out my rivals.

As the finish was approaching with only 2-3km to go I went to the front of the group. I wanted to be in a good postion as the finish approached. I held just high enough a pace that no one would want to overtake me. As I saw that we approached the grassy hill which marks the end of the race I went all in and pushed as hard as I could. With only the last tight left turn and then the short sprint to the finish line I looked behind and saw that I had some 10-20m on my rivals. However, I still managed to mess up the last left turn coming into it too fast. It didn't matter, I still crossed the finish line ahead of them.

I had finished in sixth place.

What's positive? Well, I actually placed 25th overall. Which is kind of funny because the first race in the cup, where I came in 2nd place in M40, I placed 30th overall.

Other good things: The middle of this race is a really long twisty turny singletrack section. I was able to hang on to my group here and we actually caught up with another group ahead of us. So the technical riding worked well too.

And, I guess, what I'm most happy about: I outsprinted the other riders in my small group of 5 riders that came in towards the finish, including two M40 riders. 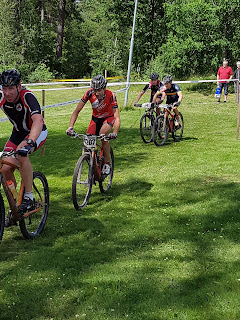 Posted by Alexander Lapajne at 22:38