Faaborg MTB-marathon - Most fun track of this year!

Faaborg MTB Marathon was a race which was previously completely unknown to me. I looked at the stats ahead of the race: 60km and 1200hm, which is rather a lot of climbing. The race was in Denmark where the terrain is usually not all that hilly, however this race was described as being "In the Alps of Fyn". Fyn is the Danish island that houses the race. The race was over a three lap course but starting and finishing in the town of Faaborg.

I turned out that the lap could be divided into two parts:
First part: Riding over grass covered hills with a bunch of steep climbs going up the hill and then steep downhills down the other side. This went on until we got out into a shorter section of paved roads which took us to:
Second part: very tight and twisty singletrack in the forest with branches and tree stems on all sides of the bike, close to the handlebars.

Race day had nice weather and the terrain was dry. I lined up at the start at the front of the grid which was nice. As the race started I took the lead and we rode through the town of Faaborg at an easy pace. Even after leaving the town no one tried to pass me and so I was at the front until the pace picked up at about 3-4km.

As we left the roads and got onto singletrack where we went over a meadow where the track turned downhill. I was perhaps in fifth or sixth place at this point. Then there were some holes in the grass and the bikes bounced around and suddenly the chain derailed from the front chainring. I got off the bike and was able to get the chain back on after a few tries. This never happens with SRAM XX1 so I was almost totally unused to the procedure of getting the chain back on.

While I was fixing the chain I was perhaps passed by some 10-15 riders and when I got back on the bike I was feeling a bit stressed out over this so I set a high pace and tried to gain back what I had lost.

I managed to gain back some of the positions that I'd lost but then at about 5km into the race I missed a turn sign and went straight ahead where I should've turned into a small trail. The most annoying thing about this is that I had another compeditor behind me who didn't warn me that I'd gone the wrong way. Very unsportsmanlike! It took me no more than some 200-300m before I realized I had gone the wrong way, turned my bike around and went back. I noticed on the second lap that they had blocked the section that I wrongly rode down with tape so I guess that more riders than I had made the mistake.

I was back to hunting the riders that had passed me when I made the bad turn. I managed again to gain back some positions before we went into the second part of the course: The thight and twisty singletrack through the forest. Now, generally speaking, the slower a mountain bike track is the slower I am compared to my rivals in a race. I like it better when a track is quick than when it's slow and twisty. I had never ridden this race before so I was a bit surprised by the technical nature of this part of the lap. As I was at the front of the small group that I was riding with everyone else was behind me and unable to pass (I don't know if they wanted to).

When we went out into the second lap I noticed that I only had two riders behind me now and they both upped the pace when we got to the hills again. I managed to follow for a while but then realized that I would have to let them go.

I had a quick look at my Garmin and was very surprised when I noticed that over an hour had passed of the race and I had just done one lap! I made a quick calculation and came to a total race time of about 3.5 hours. This is much longer than I expected and I realized that I was going to have to slow down my pace a bit to make it all the way through the race. The nature of the course was one where you had very few places to just roll and rest your legs.

I slowed the pace and rode alone for a while before I was caught up by two new riders coming from behind. At this point I had reached the twisty singletrack section of the second lap. I think one of the riders must have crashed just as he caught up with me because I heard the other rider call out: "Are you ok?". After a while the rider who had caught me passed and I was alone again.

Starting the third lap with the hilly section again I caught up with the rider who had passed me. I started thinking about the fact that this was the last lap and that the guy who I had caught again seemed faster than me in the singletrack. So I realized that I would have to create a good gap here in the hilly section in order for him not to catch me at the singletrack. I upped the pace and he dropped back at once. As I got into the last half of the last lap, the singletrack section, I concentrated on riding as cleanly as possible and not braking too much. I managed this quite well and never saw the rider whom I had passed again.

I finished in fifth place and very happy with the result. 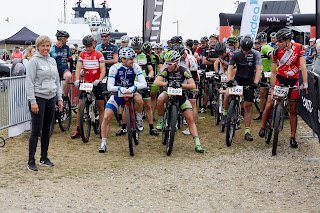 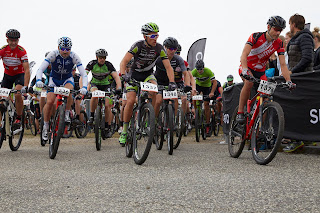 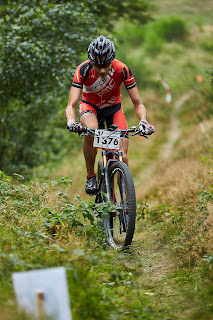 Posted by Alexander Lapajne at 10:45