The power figures presented here are probably exaggerated. I think I may have forgotten to calibrate the Quarq. The rest of the comparisons are still valid however


Recently I bought a Quarq power meter for my MTB. I've done two races now where I've used it. During the races I have glanced down at it from time to time but it's kind of hard reading the information while your bouncing around on singletrack. Sure, if there's  a longer section of gravel road or a climb then you can look down at the power data and get some useful information. However, what is interesting and entertaining (and useful?), is all the data that you have after a race. 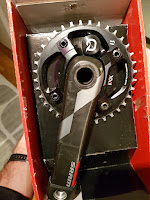 Yesterday I raced the first race in the Danish Winter cup vitnercuppen.dk. It was a 70 minutes + the lap race and I managed 4 laps in that time (and came in fourth place in the race).

I was happy with the race as I went out hard and was able to keep the power up the whole race... Or that's how it FELT during the race. But normally it would be hard to also PROVE that. Now I have the numbers. First the lap times:
Quite even, a little slower towards the end, but then the track did get gradually more and more muddy.

Let's look at heart rate and power data for the four laps (in the same order as above): 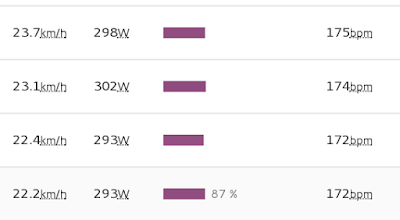 Power was remarkably even throughout the race, the variation between the slowest and fastest lap was 9W, which is 3%.

The data supports the feeling that I had: That I was able to maintain intensity throughout the race.

As the Quarq measures both side I get left/right power. Here's data from the two races that I've done:

I use my right leg more than my left. Which perhaps is normal?

The Stages power meters that I have on my road bike and the stationary Monark bike only measure the left side. That means that I'm actually a bit stronger than the numbers that I get from those two. So that's good...

I now have power data from two different races that I've done using the Quarq. The Griben race which was a race purely on gravel roads. I punctured halfway into the race so the power data is up until then. The second one is the first race of Vintercuppen.dk which I would consider a proppr MTB race. Both are very similar in length (1h14m, 1h20m):

Posted by Alexander Lapajne at 09:34