Slagelse FitnessMTB - Where's my form? Has anyone seen it? 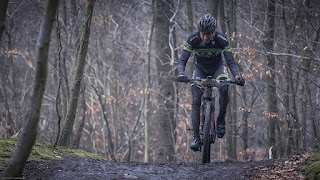 How to get back on form / when have I recovered enough??

Andalucia Bike Race went really really well. Form was perfect! But how do you best recover after a huge stage race? When do you start training again??

The first week after ABR I just bike commuted (in H/R zone 1; recovery). And then, during the weekend, I tried to get back on the nines... and failed. More rest was needed.

The second week after ABR I managed to do a set of all nine of my nine minute intervals. And at a respectable wattage! I was recovered!... Or was I?

Third week (this week): Slight cold during Monday and Tuesday. Still bike commuted. Wednesday I try for 6x8min... I manage two intervals before I'm wasted! Okay, not recovered I guess... Next day I try again... and manage 2x8min again before I'm dead on the bike. Yeah, this is definitely a message I need to heed.

I decide to take it easy for the last few days leading up to Sunday's race. I do an easy 2h ride the day before, including a standard wake-up-the-legs-interval at just below FTP. Things feel... okay, I guess.

The Slagelse FitnessMTB race is a great race to refresh your on marathon MTB racing form early in the season. However, being early in the season it's rather weather dependent. I've ridden the race many years and there have been some seriously muddy races, but also dry and quick ones. The race is 4 laps of a course totaling 76km.

During warmup I notice that the forest is really really really wet. There's water and mud everywhere. "This is going to be tough" I think to myself.

In the 2017 race I had a really bad experience with completely bonking during the third lap and just being able to survive the last lap at a really slow place losing some 15 positions. I had this experience at the back of my head as I started the race.

The start went okay and I managed to stay in the quick group. As we got to singletrack the field started to split up a bit. I could see a group with Henrik Søeberg (very strong cyclist) just ahead of me and I considered sprinting  to catch up.. but tactically decided against it. The group of riders that I was with was sort of a mixed bunch of talent. I didn't feel that we were cooperating very well; Two riders, from the same club, were riding very strangely: Sprinting up the hills, and then barely keeping any pace during the straights. Both of them disappeared of the back during the second lap.

As the second lap started I realized that the race would turn really nasty later on. Conditions were already muddy and having a few hundred cyclists pass through the mud would make conditions worse and worse for each new lap. There were three more laps to go! I already felt that the first lap had been very intense so at the start of the second lap I decided to be tactical: When cyclists sprinted ahead I didn't try to go with them. But the pace was still high in the group and guys were dropping off the back too.

During the third lap I started catching up with cyclists who were feeling the pain of starting the race too quickly. Conditions at this time were horrible with the trails becoming wider and wider as the racers tried to chose various routes with less mud. I caught up with a tired Niels Bay Pedersen, who had beat me in every race of Wintercuppen.dk, and ended up winning the cup. I overtook him but then, as we got to the end of the lap, he caught up again. There were some steep and muddy sections there where he was able to get traction but where my rear tire just slipped.

As the fourth and last lap started I saw Niels far ahead but noticed that I was, meter by meter, catching up to him. About halfway through the lap I finally caught him and this funny discussion took place:

Me: I think we're probably in last place now
Niels: I'm just going to keep riding until it gets dark

While I was really tired at this late stage of the race I forced myself to continue taking my (homemade) gels and drinking my sportsdrink. Typically this is something I will be sloppy with when I get really tired. I managed to leave Niels behind.

I finally crossed the finish line in ninth place. Very happy that I was able to make smart decisions and make the best out of a bad situation.

The race this year took me almost an hour longer than last year, even though I placed much worse, 23rd last year.

So way too much time spent in zone 3. When I'm in good shape and going strong a majority of the race would be in zone 4.

Typically I would want it to look something like this (from stage 1 of ABR): 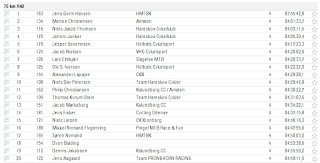 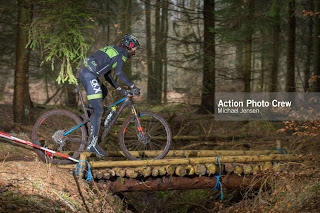 Posted by Alexander Lapajne at 13:02