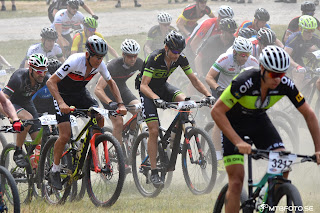 I knew in advance that racing just one week after Beskidy was going to be tough. I took some precautions by trying to take it very easy in the Slovenian Alps. I did one hard interval session last Thursday, and that felt surprisingly good.

But then I did have to spend 16 hours last Friday driving back from my vacation in Slovenia back to Sweden. And then 6 more hours the next day driving north to Stockholm where Lida Loop was to take place. That kind of sitting down is never good for the legs.

I did the normal pre-race routine the day before Lida Loop and that felt okay. However, on the morning of the race, during the warm-up, all power in the legs was just gone. I just managed to get over the starting climb when I tried it out.

Lida Loop has a short but extremely steep hill at the start of the race. This kind of quick and intense climb requires what my legs currently don't have (because of over-training): High peak power. As the race started and I started going over the hill pretty much everyone overtook me.

Lida Loop consists of three loops. The first one has quite a lot of gravel roads at the beginning. After losing all that ground over the starting climb I started making up during the first loop. I think I must've passed about 50 or 60 cyclists during that first loop. It was actually quite fun, but I knew it was taking a toll on my body. I don't think I've ever overtaken this many cyclists during a race before, if it wasn't because of a puncture.

The second loop is a lot more technical than the first. Here you get all the roots and rocks. There are a lot of places where you can chose different paths over the terrain. About halfway through this loop I caught up with Mattias Israelssons group. They kept good pace and I realised that we were not halfway through the race: If I was going to survive the whole thing I could not keep advancing on my own. I needed wheels to follow.

The group stayed more or less intact until there were about 10 km left of the race. At this point Mattias upped the pace and I was just not able to follow. During the following kilometers the rest of the group left me as well and I was getting closer and closer to total exhaustion. Some riders came up from behind and I was able to follow for a while but had to let them go. Two M40 riders passed me during the last few kilometers to the finish.

I still managed a 10th place and I really think that's the best I could do with today's form, condition and level of recovery.


Posted by Alexander Lapajne at 15:29