Engelbrektsturen is one of the quickest races in the Swedish Marathon Cup. It has lots of gravel road and few climbs, also not all that much singletrack. Historically I've had good results here:

I'm not sure if I should be proud of placing well in this least technical of all races.

Last year I had a huge crash during this race (while I was in the lead) and I was a bit wary this year knowing how suddenly it had happened. I remember that in 2016 I was really worked up about performing well in this race and really went all-in. Well, until I crashed anyway.

The start of this race is in the centre of Norberg but there's just a short bit of paved road before you're out on a loooong gravel road. This means that getting a good start is absolutely vital. After about 5km there's a short climb, then some singletrack, and then another climb. Neither of these two climbs are major but they do stretch out the field and groups start to form here.

I had been battling poor form for the last few weeks. Pretty much since Beskidy Trophy I've not been able to get back on the same level as before that race. Same goes for my weight: I'm a couple of kilos heavier than I should be (not for lack of trying though).

This also meant that I was not super focused on this race. However I warmed up well and placed my bike very aggressively on the front row of starting grid. I was right next to the pros which was cool.

The Start and First Climbs

The start went well and I was among the first 30 cyclists going out on the long gravel road. Some guys took chances and overtook on the rough next to the gravel road but I stayed put safely in line. As we got to the first climb I pushed hard and things went well in spite of the extra kilos of body fat. 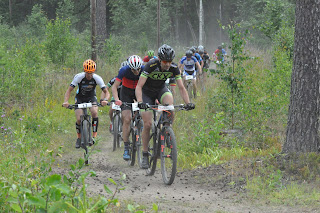 I checked Strava and found this for the two first climbs and also the first 20km of the race (last year I crashed at 22km so that's why I checked the first 20km):

This tells me that I was going as quickly this year as last year (conditions were very similar).  2016, at 20km, I was in the lead (there were three of us in M40 together in fact). This year, however I was nowhere near the top-3. So tougher opposition I guess.

The Middle and Losing the Pack

Even though I had raced Engelbrektsturen three times before I was still shocked by how our group of 20 some cyclists held together over the easy terrain. Even the short sections of singletrack and climbs could do nothing to separate it. It was a lot like a road bike race. 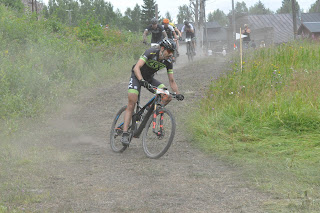 With about 20km to go we came to a small incline and here the pace got really quick and I noticed myself drifting backwards through the field of riders. At the top there was not more than perhaps 10 meters up to the last riders of the group, but it was hard to catch up. I did get close a few times, but then we got into some singletrack and I lost them again.

As I approached the last 15km of the race I was joined but two young riders who helped pull me along. I was pretty tired and just looking forward to the end of the race.

I thought we held a pretty good pace but just as we were entering Norberg and getting ready for the last sprint a group of some 7-8 riders caught up with us from behind. One of the riders win in my category and he sprinted by so quickly that I had no chance of catching him.

I finished sixth in the race, missing out of fifth place by 5 seconds. I was 2 minutes down on third place.

Good race and the form is improving. 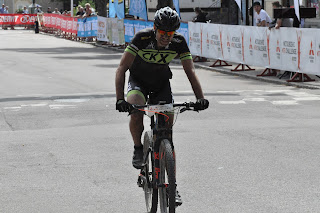 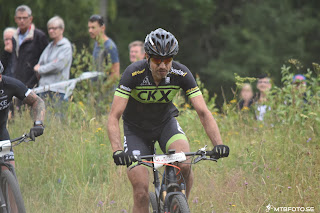 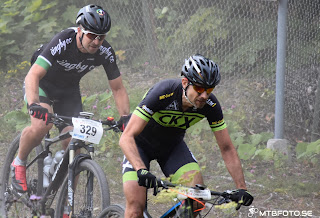 Posted by Alexander Lapajne at 15:42