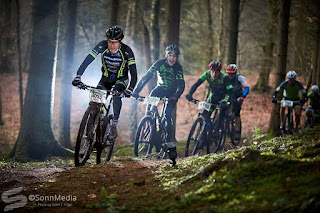 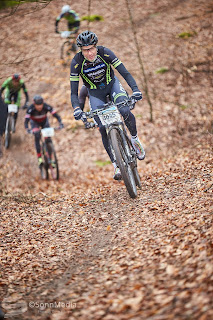 Posted by Alexander Lapajne at 09:58 No comments:

This was the sixth and the final race of this Winter MTB Cup! Leading up to the race I was in joint second place in the points standings of M40. I needed to finish ahead of Frank Hjort Degn who had the same number of points as I had. In the previous race he beat me by five minutes. However, that race had not been the most tactical because I had done a five hour training session the day before. Leading up to this race I was content with a 2.5 hour session the day before.

Weather conditions were not optimal: Around freezing and lots and lots of rain before the race. I had changed from the slippery Bontrager tire up front to a Fast Trak with little more bite. This turned out to be a good decision.

The other change that I made to the bike was to change from the soft MTT damping ("softtail") to the medium one (see photo below). At the previous race the soft one had made the rear end of the bike feel a bit losoe at times. I wanted to try a harder bushing.

After the Sluscup race the previous weekend where the organizers had bragged about 250 altitude meters per lap (7km lap) I was a bit sceptical when today's Vintercuppen race was advertised to be 150 altitude meters per lap (4km) lap. However, this time it was not an exaggeration. During the test lap I quickly discovered that the track either went steeply uphil or downhill. Most of it was on leaf covered ground which I suspected was going to turn really muddy after a hundred cyclists had passed over it a few times.

The start loop went well and I tried to play it tactically by NOT going out at full speed (as I always do). I let Palle (the M40 leader) go away uphill with three of the young guys and headed the group behind them. I climed hard but at a  pace that I knew I could hold.

I noticed that I had a tail of perhaps 5-6 riders. But I didn't let that stress me out and just continued at a good steady pace. My tail slowly thinned and after a while I just had one rider taking my wheel. However this guy I just could not shake; I would at times gain some 20-30 meters on him, but then, a bit later he would be on my wheel again. Especially on the really slippery downhills he caught up with me, even though I thought I was going pretty quickly (and taking some risks).

For each new lap the conditions got more and more slippery. Two of the really steep climbs I ended up running up for the last two laps. Towards the end the rain also turned into snow worsening the conditions even more.

Halfway through the last lap I got a gap of a few seconds to the guy behind me and I managed to keep that to the end, finishing 5 seconds in front of him. That guy was however NOT Frank (the guy tied with me in second place in the points standings). Frank came in about three minutes after me. I finished in fifth overall, second in M40. And overall in the cup, in second place. I was happy with the race: I planned it well, pacing myself, and also handled the technical stuff.

The BMC Teamelite performed well today, under what has to be considered very difficult and technical conditions. I've almost done 600km on it already and I feel at home on the bike. I'm still using the training wheels. It's going to be fun racing the bike on the NoTubes Valor race wheels with some really nice and light tyres.

A few words about this cup: Vintercuppen. The previous three years I have raced in the other danish winter MTB cup: Slushcup. For this year I decided to race both Slushcup and Vintercuppen. The races are scheduled so that they don't overlap which is great. The race locations / tracks that Vintercuppen has chosen have been great! The organization has been flawless: Well marked out courses and good officials. I will definitelly race the cup again. However one thing is a big drawback: They really need to make a special occasion of the price ceremony after each race. In M40 there is no ceremony.  The way it's now the race finishes, and then nothing. Ok, sure, they have gifts which are raffled. But that's it! It's kind of sad if you've worked really hard and placed in the top-3 and you get no accolade.

Posted by Alexander Lapajne at 22:09 No comments: