So this was the first race of the Danish Hotcup. There are seven races all in all. Most on weekends but some on weekdays. The weekend races, like this one, are 2 hours plus the lap completed. There was a bit of rain during the night and morning leading up to the race. However the terrain was mostly dry. I chose to ride the full suspension bike with the narrow S-works tires as I was expecting a slightly bumpy but quick race. Preperation during the week was good. Everything felt 100% going into the race.

Race story:
The start at the race went well and just a few minutes into the race I found myself in the lead group with four (!) other rider's from my club (Jerry, Stefan Larsson, Nico and Björn) and two Danish riders. The pace, set by Björn at the front, was brutal. I just hung on for dear life, mostly at the back of this group. The only rider in this group who was in my category (M40) was Stefan Larsson, the other riders were all younger.
The terrain was fast and furious with some gravel roads, some quick single track but also mixed in with some virgin tracks which were slow and slightly tricky. The relative lack of grip of the S-works tires compared to wider Schwalbe (Rocket Ron / Racing Ralph 2.25) was noticable. I had a couple of hairy moments on the first lap when the pace was particularly furious.
Our lead group started splitting up at slightly over an hour into the race with one of the Danish guys going off in front. Still the rest of the group, with six riders, continued to cooperate with Björn letting the rest of us come up to lead for a while. Then Nico and Björn went off ahead and left us. At about 1h40m I started feeling rather tired and dropped off at the back of the group. No other bikers caught up from behind so I was on my own. With Stefan Larsson competing in the same category as me going ahead this means I was second in M40 at this point.
At around 1h50m into the race I noticed that the back of the bike started behaving slugishly in the corners. I suspected a puncture or some sort of leak (perhaps a 'burp'?). After just a few minutes I was sure that something was wrong with the rear tire. Sometimes in the past, in this situation with a slightly deflated tire, I have tried to continue but I always have to stop in the end anyway to fill up with air. So this time I stopped almost directly, took out my CO2 canister, and as quickly as I could gave the rear tire a boost of air, hoping that the puncture fluid in the tire would seal whatever leak there was (or if it was just a 'burp' then the tire would hopefully hold air). Checking Strava later shows that this stop cost me less than a minute of time. However I was passed by quite a few riders while I was inflating the tires and I was unsure of how many of them were back markers and and how many were actual riders on the same lap as I.
So back on the bike and full speed ahead again. I was rather tired and this point. However I feel I managed to finish the race at a reasonable pace, still riding alone. The only problem towards the end was that there were a lot of back markers that needed to be passed in some thight single track conditions.
After finishing the race a quick check showed that I had come in third place. So one M40 rider had passed me while I had my tire problems. However, the quick inflation using the C02 also saved me third place as the fourth place guy only came in 14 seconds behind me.
I'm very happy with the race and especially with being able to hang with the quick guys for 75% of the race. Riders like Nico and Björn have previously always disappeared at the start of a race and I would not see them again until after crossing the finish line at which point they usually had finished some 10-20 minutes ahead of me.

Conclusion:
This is the third time that the S-works tires have burped during racing. I may need to re-evaluate how I use them. Higher air pressure? Any suggestions? 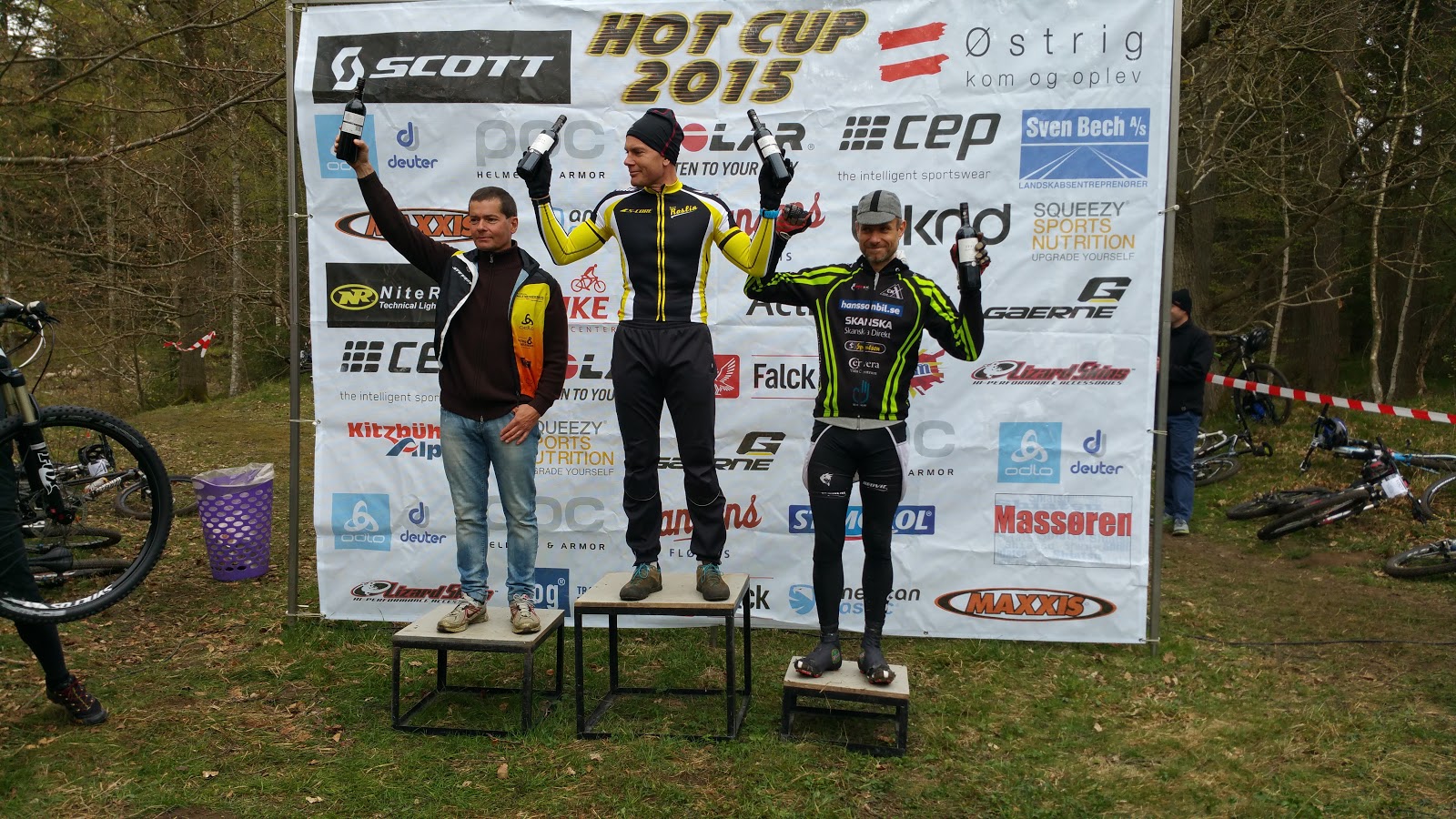 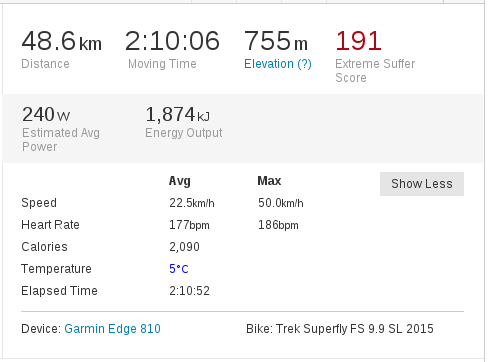 Posted by Alexander Lapajne at 08:45 No comments: 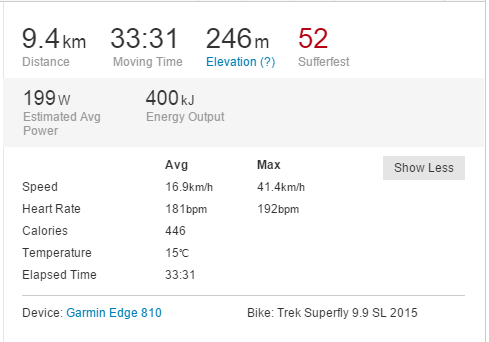 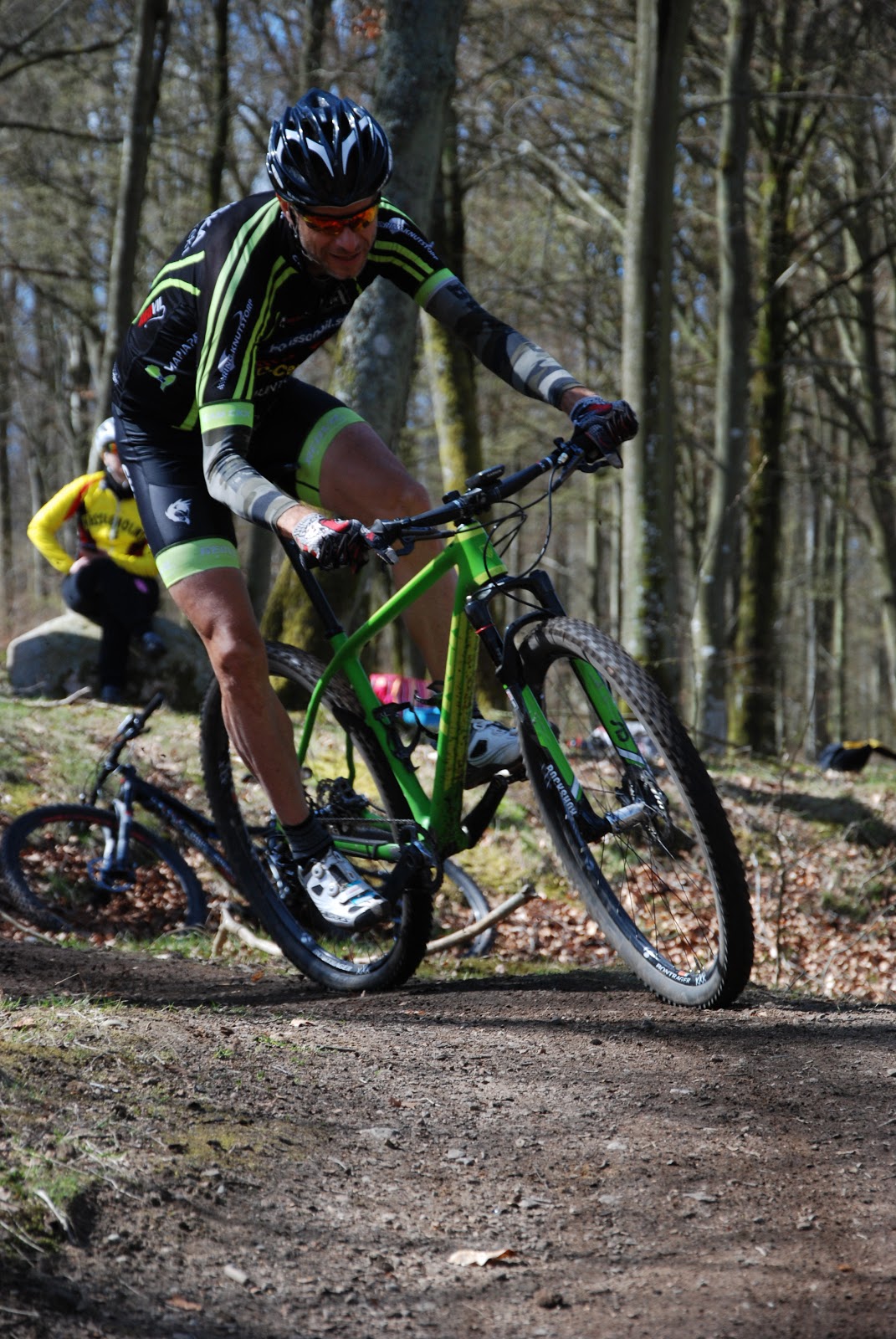 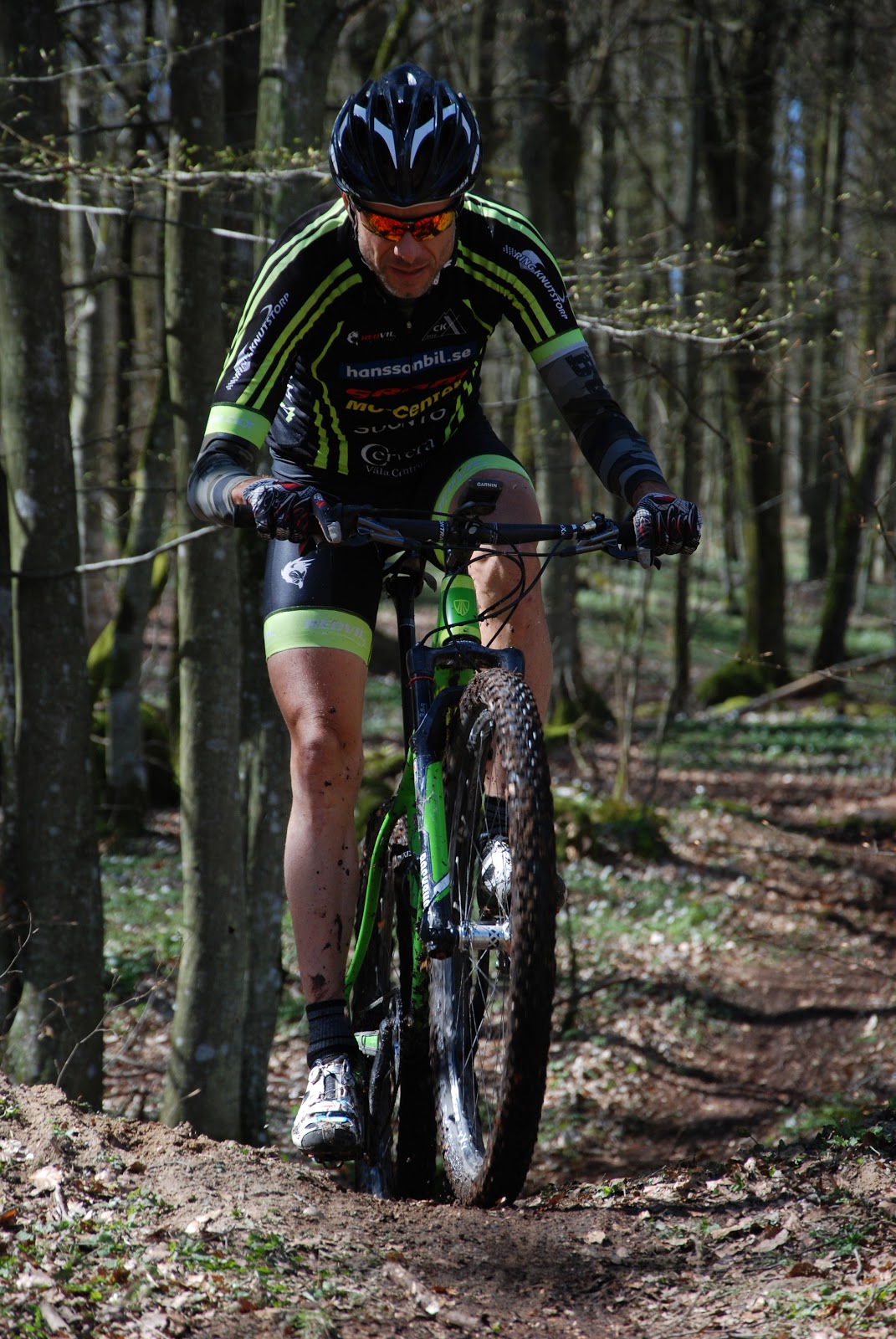 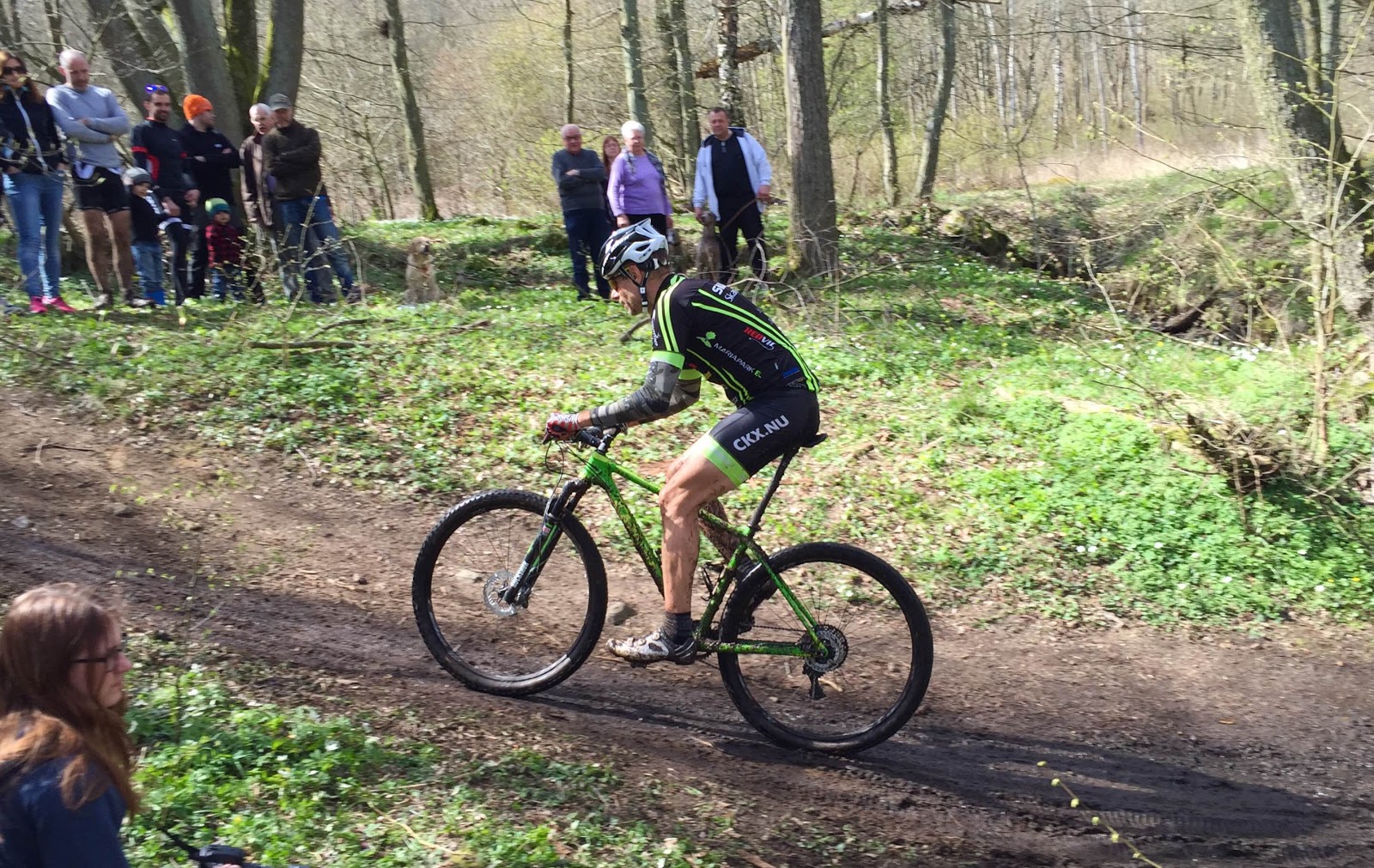 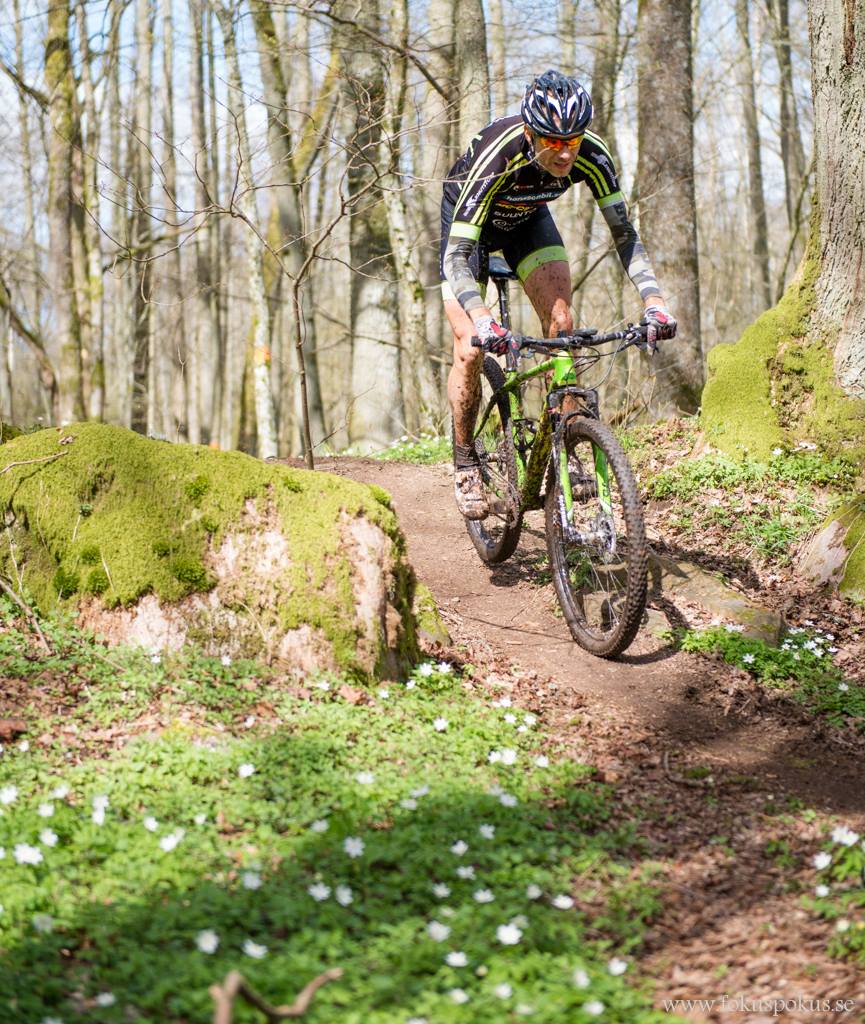 Posted by Alexander Lapajne at 18:43 No comments:

The first race of the Dust Cup was a time trial race. I chose the full suspension Superfly because it seemed appropriate. There was some rain during the night but not enough to change to grippier tires so I went with the narrow and fast-rolling S-works. We got to the race early enough for a practice ride. The course turned out to be fast and furious. A lot of steep (short) climbs and manic technical descents. A LOT OF FUN in other words!

Race story:
The lead up to this race was not optimal: I did mountain bike guiding for a group of "advanced riders" the day before. This turned out to be a bit more intense than I suspected. So we ended up doing 2.5 hours of HARD riding in the forest. I had also biked the two days  before this so race day was the fourth day in a row that I biked.
The time estimate for the race, which was three laps, was just over an hour. So there was really just one way to go: Full on from the start. As it was a time trial we were sent out with 20s intervalls and drafting was not allowed. There was really no quick rider just in front of me to hunt down so no motivation there.
As always I held an eye on my heart rate and saw it go up and settle on a nice lever of just above 175. I know that I can maintain this kind of pulse for 1+ hours without problem. I just tried to be smooth in my biking. No braking in the technical descents and try not to crash. There was no real problem during the race, the lapping went well and I my feet didn't leave the pedals at any time.
During the second lap, when two of the Elite riders caught up with me I went a bit harder than I perhaps should, but the lap times turned out quite even. I managed to keep my heart rate even during the race and even the last lap went well.
After finishing I quickly checked the live standings and noticed that I was in the lead. And then it was a case of waiting for all the other riders to finish. In the end it turned out that I had won the race.
Conclusion:
I like quick and technical courses and I'm good at them 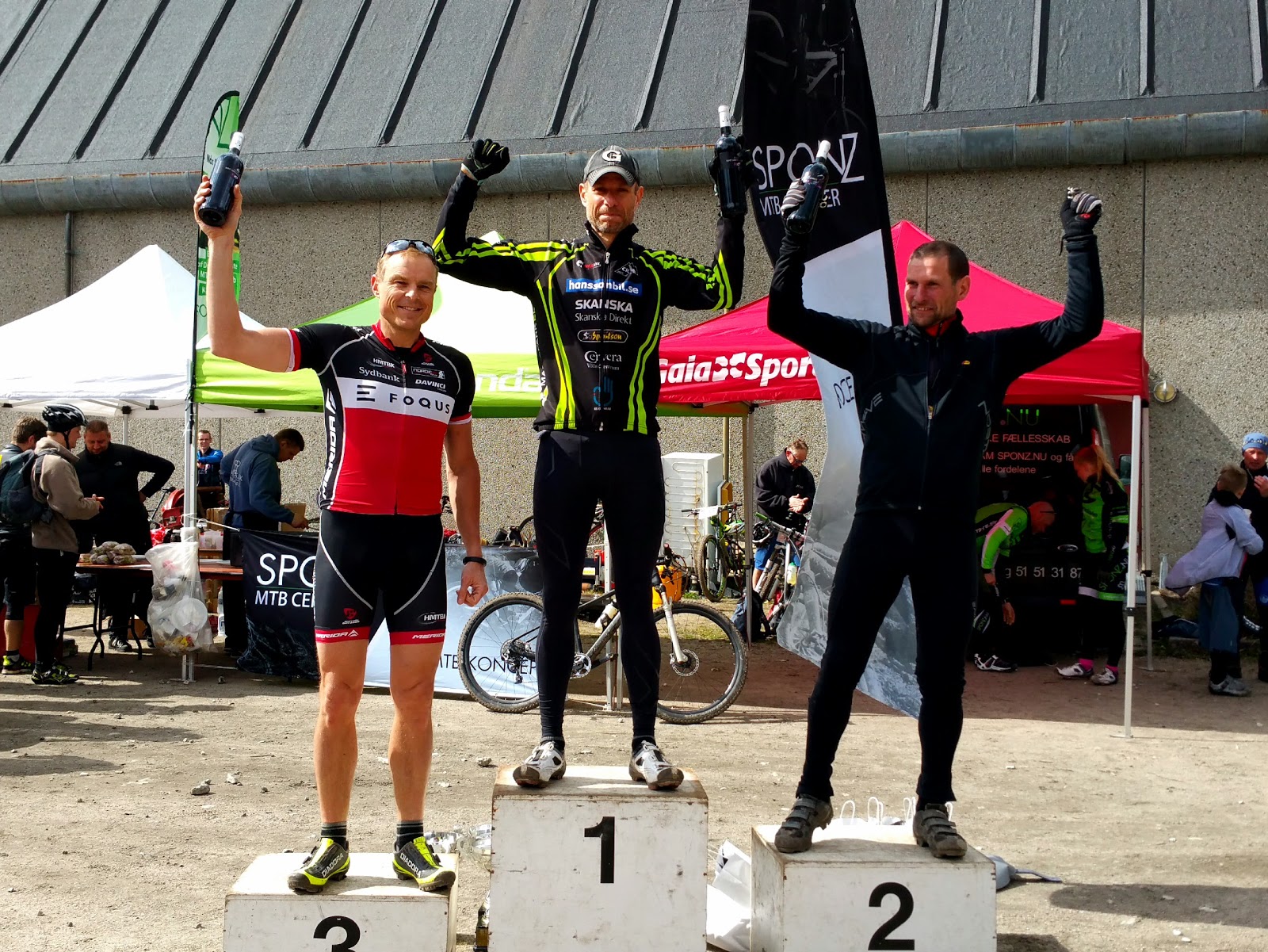 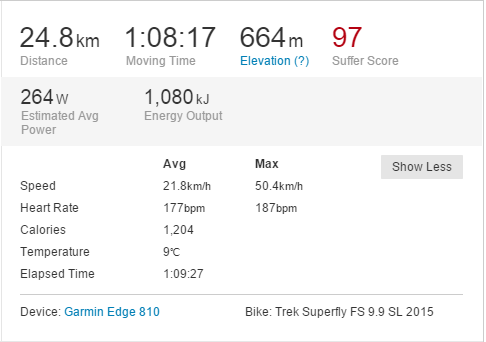 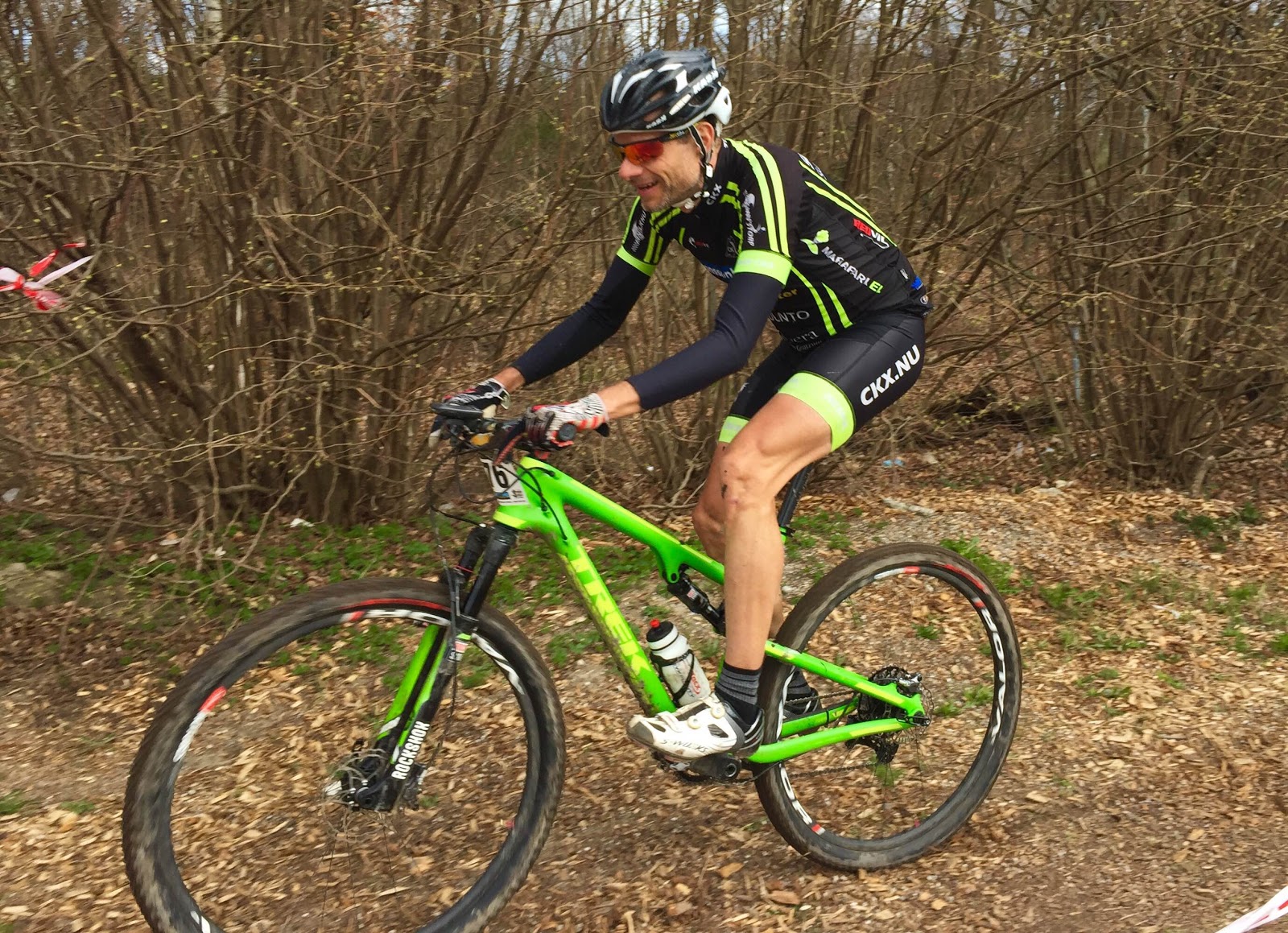 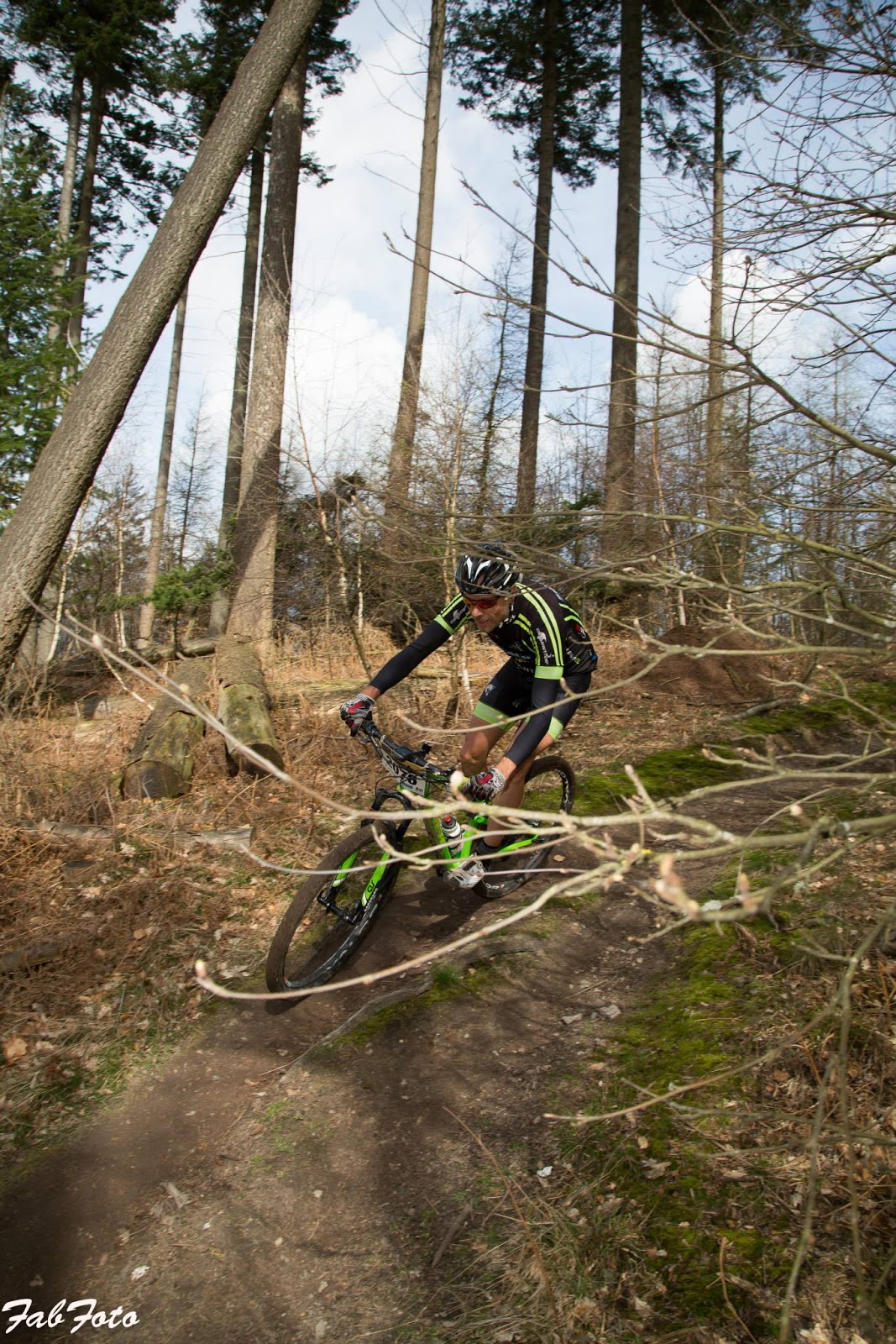 Posted by Alexander Lapajne at 19:16 No comments: