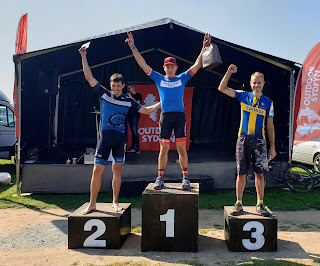 Outdoor Sydfyn MTB is one of my favorite races. The reason is that the track is bloody fantastic. For a marathon it's a technical track with almost all singletrack, except for the transport section to and from Faaborg (the city where the race starts). You can clearly see its technical nature by observing the low average speed: well below 20km/h. If this was a typical Swedish marathon the average speed would be somewhere around 25km/h or higher due to tons of gravel road sections.

The race is a bit of a drive away in Denmark, and not on the closest island from us Swedes either but another island further away. Luckily I had my young pal Emanuel with me to keep me company. He's really quick and has a great future ahead of him as a cyclist but he hasn't done a lot of marathons yet so I'm trying to coach him a bit.

I had participated in this race on two prior occasions: in 2016 when I came fifth, and then last year when I was in a good position with just a few kilometers to go but managed to take a wrong turn at a crossroads and didn't notice before crossing the finish line.

The layout of the race is pretty simple:
There's a bit of asphalt and gravel roads leaving Faaborg. Then three laps of a track which can be divided into two sections:


We did the long version of the race, "Den Grusomme", so we had three laps to do of this track.
Then back to Faaborg on some gravel roads mixed with singletrack.

It was a warm day and I was expecting about 3 hours of race time. I had set out an extra bottle on the track. The funny thing is I ended up drinking just the bottle I had on the bike (900ml) and that worked out great. I always do finish 500ml of sports drink in the hour leading up to race start so I'm properly hydrated and energized.

I lined up on the front row of the grid and as the race started we all went out in joint formation. After a few kilometers we can to the first climb and here the pace got frantic. I managed to stay with the lead group of perhaps 10 riders as we got to the first lap of the track. 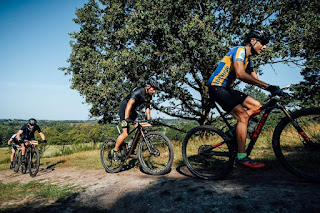 Going up and down on the grassy hills we got a bit split up but then as we entered the tight singletrack section I could hear riders starting to bunch up behind me. Yeah, these tight twisty trails are not my strong suit. Trees and branches are mere centimeters away from the handlebars and there are hidden roots and tree stubs which are just waiting to get stuck on your pedals. 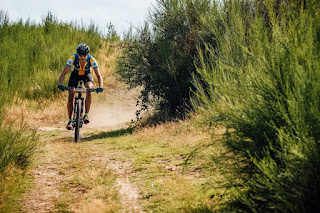 As we got back out on the open grassy hills with the steep climbs I managed to leave the other riders that had caught me behind again and there was just one guy still holding my wheel. We stuck together for the second lap of the track actually talking quite a lot. I knew him from Beskidy Trophy this year so it was quite a social thing to ride and race at the same time. 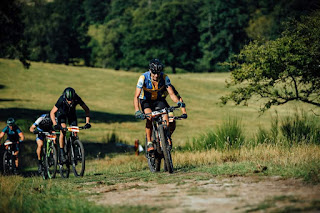 Just at the start of the second lap I had a first-ever: I bee stung me on my ankle. I actually felt the sting, looked down, and saw that it had stung me through my sock. I brushed it aside. It did ache quite a lot for about 15 minutes and I did worry a bit about it swelling up. But nothing happened and the pain passed. (The ankle was still swollen 48 hours later) 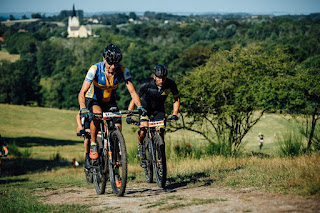 At the start of the third lap I upped the pace just a little bit and he dropped back. I ended up riding the third and last lap alone. The funny thing with these kinds of tracks is that I get quicker and quicker for each lap as I get used to the terrain and relax more and more.

After the end of the last lap there was just the transport section of about 10km going back into Faaborg. My legs felt really fresh and the body was in on it so I pushed hard even though I could see no one coming up from behind. What did happen is that I started to catch some riders. I caught up with and passed two riders and sped by them quickly in order not to give them a wheel. Nearing the finish I could see that I had almost caught another rider and I started sprinting to catch him. At this exact time however he looked behind, saw me, and sped up. I almost caught him but finished 9 seconds behind putting him in second place and me in third.

I waited for Emanuel a long time after crossing the finish line and when he didn't turn up I started to worry a bit. Then, one hour after I had finished, I saw him in the starting area. He was very wobbly on his legs and I got him a chair so he could sit down. It took a few minutes and then he puked his entire stomach contents out. Emanuel had not had a good day. He did recover quickly however and before leaving we got to enjoy some home made ice cream together.

Posted by Alexander Lapajne at 10:21 No comments: