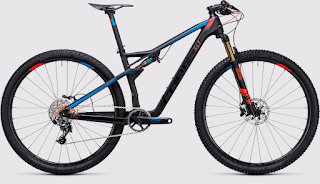 I first got interested in the bike when I read some articles about it last Autumn. The talking point was the weight: 8.9kg! Wow! Even Cube's site states the weight at:

When I finally got the bike delivered (it was almost 2 months late) I checked it out and weighed it (without pedals obviously) and it came to....:

Now that's more than 8.9 kg! Okay, so mine is the 20" frame and perhaps the smaller frames are a bit lighter. But I seriously doubt that they'r half a kilo lighter. Also keep in mind that Cube supplies these bikes with very light tires: Schwalbe Rocket Ron 2.1 Liteskin in front, and Thunder Burt 2.1 Liteskin in the rear (weighing in at about 500 grams and 400 grams respectively) 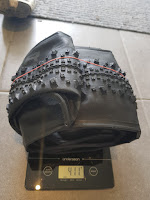 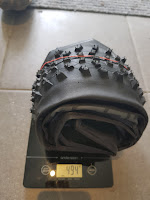 The wheels are really light at 1300 grams. 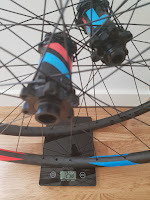 BUT they are not real Boost wheels, they just use adapters. Which is a bit of a disappointment.

I tubeless converted the wheels 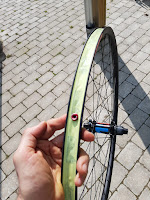 Got rid of some very heavy rim tape: 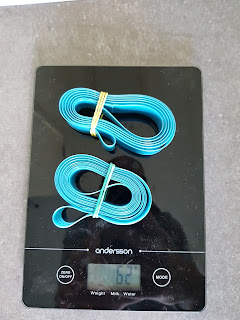 The tires that I mounted are Schwalbe Rocket Ron 2.1 Snakeskin which weigh in at 550 grams each. Most marathon races I will use a Schwalbe Thunder Burt 2.1 Snakeskin at the rear which is 50 grams lighter.

The brake disks are light, but You can save almost 100 grams by going with Ashima. I have purchased a couple of Ashima ones which are going on the bike. 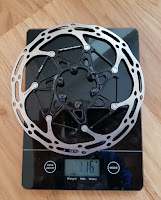 The saddle is all carbon fiber, no padding... and VERY light! 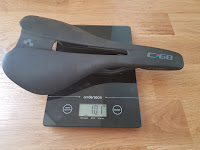 The seat tube is just a regular carbon one... not particularly light

Same for the handle bars... not that light.

I replaced the handle bars with with one from Bike Ahead and saved about 100 grams. Also it looks nicer

The grips are foam grips but HEAVY. I replaced them with my own ones 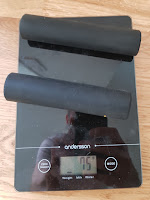 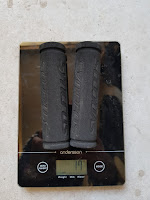 So I mounted some light pedals, a bottle cage and Garmin mount. And the weight came to...

Remember the original weight was WITHOUT pedals, and with Liteskin Thunder Burt in the rear. So I've saved perhaps some 300-400 grams.

But How Does the Cube Ride?

It's a very nice bike. I've ridden four races on it now and it feels very quick. I was surprised that I felt that I could trust the bike at once lean into turns. It's very quick to react and feels more like a XCO bike than an XCM bike.

When it comes to damping performance my BMC Fourstroke is a lot more subtle and goes better over roots and rocks. I'm not sure if this is because the Fourstroke has the old Fox CDT shocks which have three different settings, the new one has the Fox Stepcast with only two modes. Or if it's because of the different geometries of the two bikes. The Cube is half a kilo lighter than the BMC.

Another difference is that the Cube feels lighter in the front than the BMC Fourstroke does. That's a good thing obviously.

I'm still working on adjusting and trimming in the dampers on the Cube so that part could get better with some more experimenting.

Here's just a bunch of photos of the bike 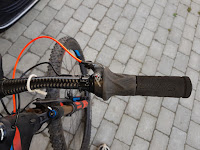 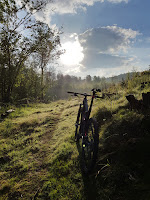 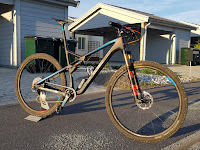 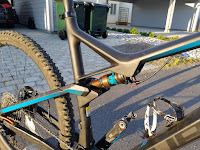 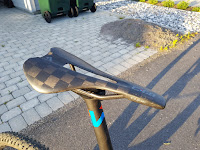 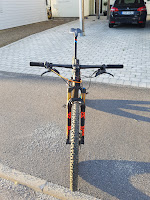 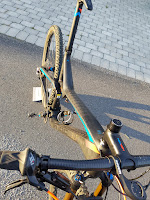 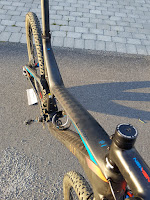 Posted by Alexander Lapajne at 14:06