The Swedish Marathon Cup, "Långloppscupen", has a system that determines your 'rank' and thereby which starting group you line up in. The ranking number is calculated using a few different factors, the main one being how far behind the guy in first place that you came. There have been six races so far in the cup (there are three left) and I had a look at my 'ranking' numbers during the season:


The trend is looking good!
Posted by Alexander Lapajne at 15:18 No comments: 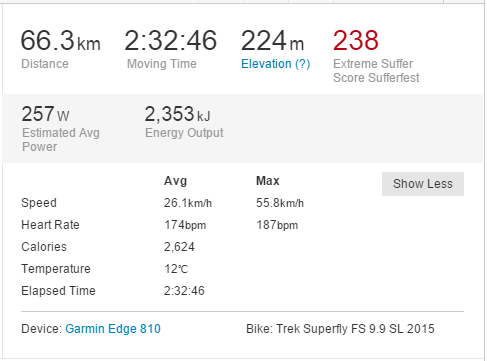 Posted by Alexander Lapajne at 15:31 No comments: 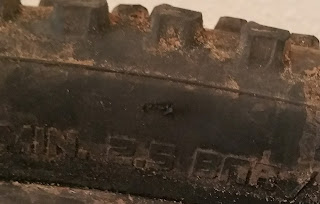 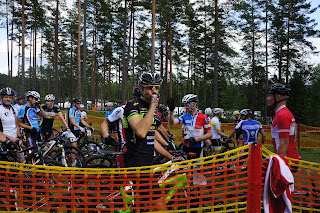 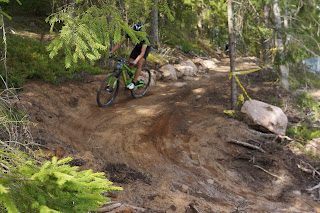 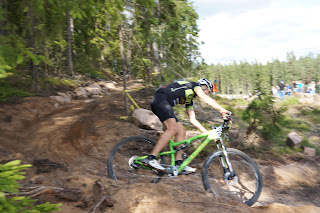 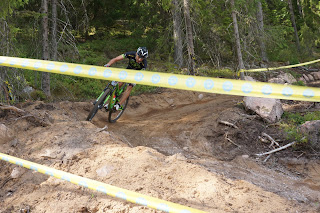 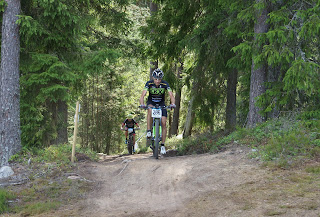 Posted by Alexander Lapajne at 17:55 No comments:

Mörksuggejakten is another race in the Swedish Marathon Cup (Långloppscupen). It's a quick race with flowy trails and gravel roads. The fast paced single track and loose gravel give an adrenalin rich experience. The race starts of with a long climb on a paved road which stretches out the field of riders really well.
I hadn't been feeling all that great after last weekend's race so hopes were not that high. I was however looking forward to racing, as I always do. In last year's race I had a puncture close to the start so nothing to compare with really.

Race story:
I started in the second row again, but I mamanged to place my bike at the very front of the row. I, for some reason, ended up in the center of the pack while riding through Rättvik on the way to the long first climb. I usually chose either the right or left side of the road so that I can advance easier and it always feels a bit safer too. I had a pretty good ride up to the bottom of the climb.
The length of the climb is 2.5km and it's about 200 meters in altitude. As I always do I started advancing through the field. Pulse was good at above 180 all the way up. It hurts, but it's the only way to do it. I did however never quite manage to reach Jerry or Robert Elisasson and so I felt that I perhaps missed some of the good wheels that I needed to hang on to in order to place really well in this race. Checking Strava after the race and comparing the time going up the hill to last year's race the times are almost identical. However last year I rode the Stumpy equipped with the Lauf Fork so the bike was probably around 1.5 - 2kg lighter then. Considering that I think I was going well up the hill.
So after the hill is a quite messy and quick descent, even tough it's not the least bit steep. And then you get to some quick gravel roads. Here I was really missing the fast guys and had to do a lot of work myself. I jumped from group to group trying to advance. Once things settled down and we had a group of riders it was hard to get people doing their job pulling at the front. Only a couple of riders were willing to do any real work at the front.
Once we got to the more messy, rooty and quick single track the full suspension Superfly really showed it's best side. I was able to be really brutal and not worry about the bike throwing me off or doing anything unpredictable.
There's a bit of a climb at 40k (with 30k left) and at this point we had a group of about 10-15 riders. I decided that it was time to perhaps bring that number down a bit. I went to the front and pulled hard all the way to the top of the climb. It felt like I was going well (heart rate looked good all the way up) but when I looked behind at the top I noticed that I had only managed to stretch the group out into a long line, not split it up.
More hectic and fun single track followed and there was a guy who went to the front of our group and pulled hard. I got on his wheel and things started to go really quickly. The group grew smaller all the time and I felt really good at this point.
With only 5km to go I started to feel tired though and lost a few places. Going over the finish line in eleventh place was a bit of a disappointment with 3-4 guys only 30 seconds ahead of me. 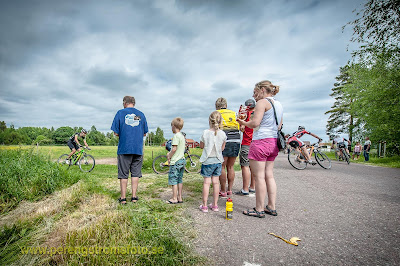 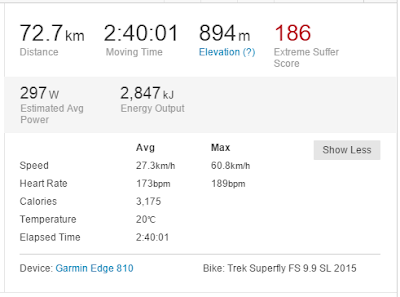 Posted by Alexander Lapajne at 23:36 No comments: