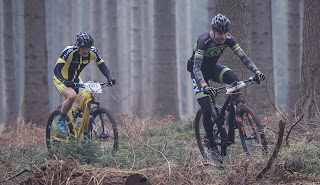 
This was the first race of the Danish summer cup: Hotcup. The setup is a 10 km per lap course which is ridden for 2 hours plus the last lap.

Conditions were nice a and dry. I decided to ride the my Cube bicycle, even though I haven't been using it much since I got the Trek Top Fuel.

I was in having a great day and going strong. The pace was super intense. The terrain and trails were of a technical nature and really required that you trusted the bike and the grip the tires gave you. Most of the race I was in a group with my pal Stefan Methander and two Dansish guys.

The group formed already on the first lap. For a while Björn Österberg was with us as well, but then he went off the front of our group. I tried to follow but it took a while before I was able to get to the front of the group and by that time Björn was already too far ahead. I could see him further ahead and noticed that he had caught the next group.

However on the second lap I saw Björn walking back towards us with his bike beside him: He had punctured (he did manage to find a tube and finished in 7th place)

At about halfway through the race the two Danish guys (let's call them "Young guy" and "Cannondale dude") managed to get ahead of Stefan and I and a gap formed. They were so far ahead after a few minutes that I was unable to see them anymore. I kept the pace up however and when another half an hour had passed I was able to catch them again. I first caught Young guy and immediately just buzzed past him on a gravel uphill road, he was unable to attach himself to our group. A few seconds I also caught Cannondale dude and even though I tried to accelerate and drop him I was unable to do so.

Going out on the last lap Cannondale dude was able to get a gap on Stefan and I as a back marker totally refused to let us pass after he had let Cannondale dude through. We lost about 100 meters while he blocked us in spite having plenty of opportunities to let us pass. I got really pissed at this.

Then, 5 minutes into the last lap, after exactly two hours of riding I hear a swooshing sound and notice my rear tire going flat. I stop and notice that I have a huge hole where Stans' fluid is spraying out. I try my CO2 but the hole was just too big. 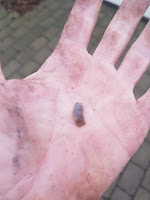 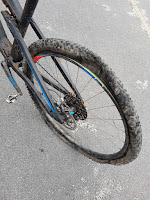 I'm pretty sure we would've caught Cannondale dude and he ended up finishing in third place in M40.

I'm still happy though because even though I'm about 4-5kg overweight and have just managed to start getting some good watts on the intervals for the last couple of weeks, I felt very strong today. The whole situation with having to let to two competitors go and catching them later is quite rare for me; In previous years, when I've started strongly it has been a question of how much I tire towards the end and how many places I lose.

I wasn't sure which bike to use today: I've been very happy with the new Trek Top Fuel. However I opted for my Cube and it ended up feeling great in the terrain. This makes my confident that I can continue using it later in the season 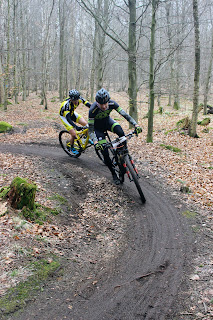 Posted by Alexander Lapajne at 15:03 7 comments: