So here we were for the first race of this year's XCup series. This south Swedish cup is the one which all my friends and training partners participate in. It's always fun to race here. There are no age categories or classes.

I have been training quite hard as some important races are approaching. The first big one being Billingeracet in two weeks. This Thursday I had first gone for a hard interval session in the morning, then bike commutes to work, and then, while at work, a friend told me that a group of riders were coming to Genarp in the late afternoon and if I wanted to go for a ride with them. This sounded like a lot of fun to me, but, well, I had already done some hard riding... and, also, I had a race on Saturday (the XCup). But, being the spontaneous (and reckless) person that I am I got on my commuter bike, raced home, changed bikes to my mtb, and went out for 2.5 hours of hard riding with the boys. The next day I was totally nackered! Obviously this did not bode well for the XCup...

Already while warming up for today's XCup my body didn't feel all there... So expectiations were not high... The weather was turning to rain and during the practice lap I noticed that this was all tight and rooty single track, a lot of it newly made, and stones, and roots, and more roots... Which were getting wet.

The start loop is a long climb. We had this kind of start loop already last year and I love a good climb to start the race off. However, today... I was dead going up this first climb. Rider after rider kept going past me and I got into the forest and singletrack perhaps in 30th or 40th place.

I started advancing slowly but it was really hard to overtake. I had Jonas Nilsson, a friend who is usually a very skilled and technical rider, in front of me. But he crashed twice, where I couldn't get around him (he was ok), and we lost time and distance to the riders ahead.

Once I was able to get around him and also Marcus (who got OFF his bike at a rocky stone crossing!) I was able to increase the pace. However when going out onto the second lap, at a short but steep climb, a group of riders just flew past me. Yeah, the legs were just not there today.

I managed to hang onto this group of 4-5 riders that got past me as the terrain got more level and then they started having problems in the technical terrain which ment I got stuck behind them as they slipped and slided on the wet roots and stones. Towards the end of the second lap I had gotten ahead of them and they dropped back.

Going into the third lap I now saw Benny Andersson ahead... He had been the rider who was in front of Jonas Nilsson and Marcus when they held me up at the start of the first lap! Yeah, it had taken me two laps to catch up with him again due to the commotion in the forrest. We ended up having a good battle and switching places a lot. Oscar Persson was also involved and it was a lot of fun.

In the end, during the last couple of kilometers before the finish of the fourth and final lap, I upped the pace and was able to get away from Benny and Oscar. I finished in a disappointing 17th place, one of my worst results ever in XCup. But I got a good training session out of it and I had lots of fun. A top-10 placing was not too far away.

Posted by Alexander Lapajne at 07:56 No comments:

This was the he first race out of six of the Danish summer Hotcup. The weather was dry and the tracks were grippy. This particular location always offers quick flowy singletrack.

The start went well and I soon found myself with a group of my training partners: Stefan Larsson, Stefan Methander and Martin Wenhov were all with my group. So was my old Danish racing pal Henrik Ahlbäck.

Towards the end of the first lap we caught up with the lead riders where the last rider of our gang, Björn Österberg, was. However not long after catching up with them they increased the pace and gaps started developing.

After about half a lap of going in the red trying to catch Henrik I realized that it wasn't going to happen so I decreased my pace and let the other guys catch up. So soon Larsson, Methander and Wenhov (and also some Danish guys) were back with me. They all took my wheel for a few minutes and then suddenly Larsson sprinted past me and Methander took his wheel. I increased my speed and got on Methander's wheel.

While we lapped going out on the third lap (I estimated that we would do a total of five laps in the alloted time) Larsson picked up a new bottle and Methander sprinted to the front of the group. I sprinted after Methander and the pace quickened.

It was at this point that I noiced something wasn't quite right with my bike. The front end washed out in every turn and I had to take the turns wider and wider. Also the bike felt sluggish and I had problems staying with Methander. I started suspecting that my front tire was losing air.

Halfway through the third lap the bike was almost impossible to handle and I decided that I had to give it a shot of CO2 and hope for that to help. Obviously while I was doing this I lost my group. I got back on my back, lacking some motivation, and went on riding a bit slower, waiting for the next group to catch me, and, obviusly hoping that my front tire would hold air.

A group did catch up with me and I got on their wheels. However after a few minutes I noticed that the front tire was losing air again. When lapping for the fourth lap I decided to call it quits.

I checked the front tire afterwards and it was empty and dry of Stans. However, even after refilling and taking the bike out for a test ride it the tire was still losing air. I checked the valve core and there was the problem: It was leaking air. I changed the core and after that the wheel held air. This was exactly the same problem (with the same wheel) that I had during Andalucia. At Andalucia I had just cleaned the valve core (instead of replacing it) and then continued to ride (and it had worked... then!)

Here are some photos from the excellent photographer Jens Thomasberg 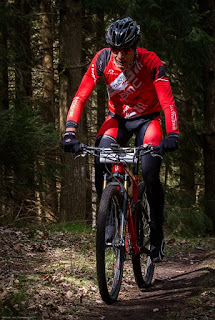 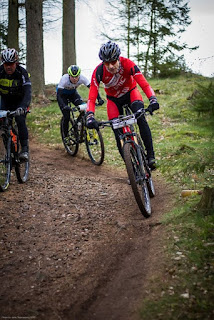 Posted by Alexander Lapajne at 10:23 No comments:

Preparing for the 2017 season

I'm writing this post during the last race-free days this Spring. It's Thursday today and on Sunday the 2017 race season starts off with a race in the Danish cup called Hotcup. From now on I will compete every weekend until the end of October.

I had decided to have my own mini training camp during Easter weekend. Many of my friends were abroad biking in the Mallorca hills and I was a bit envious of them. I had four days off and got a lot of biking done: 5+ hours of rolling time each day. Most of it on technical single track. It's an interesting thing when you spend that many days in a row on the (mtb) saddle as you become one with the bike. It's a nice and very relaxing feeling.

Some photos from my Easter biking (yeah, we had snowfall!):

After Andalucia Bike Race my weight went up to about 78kg. Partly because of my disappointment with having to abort the race, but also due to the issues with my issues with the Achilles tendon. It's down below 75kg now again. I'm obviously not satisfied with this so it's going to continue to drop during the next few weeks. I was at below 73kg before Andalucia and that's the first goal. Last year, before Beskidy Trophy, I was at 70kg, and my goal is to reach that weight again before this year's Beskidy Trophy.

About a week after Andalucia I got four shots of what is essentially blood-thinning medication as I had the diagnoses "tendon creak". This was about 4 weeks back. The shots helped a lot and the pain disappeared almost entirely. However it would return at regular intervals when I pushed hard. But it is clearly better and even during this last Easter weekend when I really did a lot of training the pain was only moderate. Today, after having done an interval session on the training bike and then bike commuting to work I feel no pain what so ever. Previously hard sessions on the stationary bike would typically trigger the pain.

This week: Hotcup
Next week: XCup
W18: H12 - This is a fun 12-hour team event in Denmark.
W19: Billingeracet - Race #1 in the Swedish Marathon cup and the first important race of the season. I will be trying to maximize my form for this race
...
W24: Beskidy Trophy - The big one!


Posted by Alexander Lapajne at 13:59 No comments: