The second race in Vintercuppen was another cold one. Just a couple of degrees above freezing. No snow on the ground however and it had not been raining during the week. The track turned out to be a fun one with some tight and twisty turns and fun technical sections. Some of the parts that were covered in leaves turned muddy and provided an extra challenge.

The race started off well and early on I was in the second group chasing the leaders. There were three of us in the group. However, just at the end of the first lap there was confusion as to were the race track went as markers were missing. This meant a bunch of riders caught up with us and all of the sudden there were now 6-7 of us. Just a couple of minutes later another wrong turn meant we had to double back, more riders came up from the back, and the group grew to 10-12 riders.

The next section was a downhill track with berms and I saw three riders at the front sprinting away from the group. I again expended some energy to move up the group and start chasing them down. After a while I got ahead of the group of 6-7 riders and was in no-mans-land between this group and the group of three riders that were ahead of me.

At the end of the second lap I was joined by another rider from behind and we got into some serious chasing to close down the distance to the three-rider group ahead. Halfway through the third lap we had caught them! Checking the lap times afterward this third (and second to last) lap was my quickest one.  However, I knew that I had expended a lot of energy chasing this hard for a long time and just stayed at the back of the group trying to recover. The speed was high though and recovery was almost nonexistent.

When we lapped and went out for the last lap I felt that I had overexpended myself and that I was probably not going to be able to keep the pace up for the entire last lap. I let the group go early on during the last lap and just tried to keep the pace up in order not to get caught from the rear. This worked... almost. Just at the end of the last lap I was caught by two riders. They turned out not to be in my category however so I didn't lose any places.

I crossed the finish line in fourth place.

The laptimes show that I got a tad bit tired before the last lap:

The Heino Fall Classic has always been my favorite Autumn race. It's in the Tisvilde area in Denmark. You park by the sea, which in November always is windy and cold, and so you shiver at the prospect of racing in lycra. It's always a hard decision to figure out what to wear.

This year temperatures were around 2-3 degrees C above freezing: I went with bibs, leg warmers, and a long-sleeved shirt.

This weather was a big difference from last year when there was a snow storm the day and night before the race. We ended up racing in deep snow and I wasn't able to complete both laps of the race. I wrote about the race here.

It had been raining in the days leading up to the race, but the evening before the race I went and put on my race wheels anyway. However, in the rear, I changed from the usual Specialized Renegade 1.95 to Fast Trak 2.0. This turned out to be a good decision. The track was mostly quick, with a few muddy areas and some wet roots. However, with plenty of gravel roads the easy-rolling tires were useful.

The race is on a track which is ridden for two laps. The first one also has a start loop of about 5km. All-in-all it's 45km.

Things started off well and I was in the leading group of some 10 riders all through the start loop. This in spite of a crash just in front of me in the second corner (this can be seen in the video below). However with the first really steep climb after about 6km a guy a few places in front of me let go of the lead group and before I was able to scramble around him they were gone.

We formed a second group behind the leaders which started at around 10 riders. Unfortunately I made some bad decisions positioning myself in the group during the first lap, ending up to far back in it. As gaps formed it was up to me to bridge them. At the end of the first lap were were down to 5 riders and I had expended a lot of energy staying with the group.

During the second lap people started racing off ahead of the group but also dropped down in the back until there were just two of us left. And then we were joined by a really strong rider coming up alone from the rear. Very impressive! This constellation prevailed until the last climb before the finish when I was too tired and had to  let go of the other two riders.

I crossed the finish line in 12th place overall (no age categories), out of 300+ riders. It was a good race and I was pleased with the results.

Video of the first half an hour of the race, including a crash at about 5 minutes 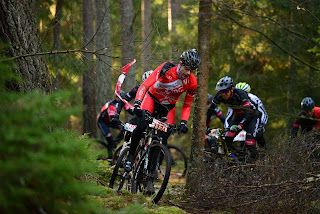 The first race in the Vintercuppen series took place in wintery conditions. Just a few degrees below zero and a forest which was mostly free off snow. However there were some icy patches to be careful off. The setup for this cup is that the races are 70 minutes plus the last lap. Each lap was 7km.

I hadn't been feeling well all week and had been off the training. However, before the race I couldn't really feel anything wrong with my body so I had no fears of not performing to my full potential.

I got a good position in the field as the race started. We were perhaps 10 riders in the front group and I hung on at the back. About halfway through the first lap I let go off the lead group and a smaller group of three riders formed: Henrik Ahlbäck, me and a junior rider. We caught up with another guy who dropped back from the front and then there were four of us.

During the first lap conditions were quite grippy with just some icy patches. No snow in the forest at all. However, on the second lap I noticed that places that were not very slippery on the first lap were suddenly super slippery. The riders that had gone by had polished the ice that was there. Also the roots had become really slippery. I was close to falling in one place. It became hard to distinguish where one could trust the grip and where not.

Out on the third lap I had Henrik Ahlbäck, the junior rider and another rider on my wheel. Things were still feeling 'okay'. I had noticed that I perhaps did not have 100% zing in my legs. Then at the bottom of a climb, in a sharp right turn over some branches, there was suddenly no grip where there during the previous two laps had been no problems: My front tire lets go and I go down. It was in quite low speed and I'm back on the bike quickly. I immediately set off to catch the group again, I was leading it after all so it should be possible. But this is when I notice that my form is not all that great. I can see them out in front but they continue to outdistance me.

Later on the third lap, while I'm still hunting the group ahead of me, two riders come up from behind. This is while I think that I'm keeping quite a good pace so I'm a bit surprised and also disappointed. (Maybe I'm not going as quickly as I think?). I manage to hang on for just a few minutes before I'm dropped. During the fourth and last lap another two riders catch me and I'm able to hang on to this group to the end of the race.

I finished in fourth place in M40 (13th overall). Not a very good result. However, as I got home in the afternoon I felt really wrung out and much too tired considering the length of the race. So something is not 100% right in my body currently. 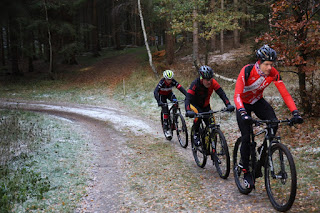 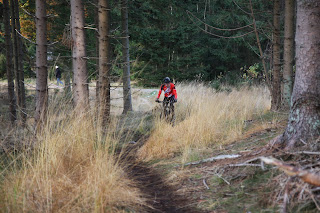 Posted by Alexander Lapajne at 07:26 No comments:

Victory in the first Slushcup race

The first leg of the four race Slushcup took place in Denmark at Tisvilde Hegn. It had been raining for a couple of days leading up to the race so decided to race on my training wheels which have nice grippy and wide tires. The track however turned out to be quite nice, not too muddy, just with some slippery roots.

It's been a while since I raced (4 weeks I belive) and after keeping a semi-strict diet I've been enjoying food throughout October... and gained a few kilos. Today's track was quite hilly and in the uphills suffered from the chocolate consumption of the past weeks.

Slushcup has changed the setup for this year's cup: You ride 100 minutes MAX. Meaning all the laps that you finish in under 100 minutes count. After 100 minutes the race is over and if you're in the middle of a lap it doesn't count. This means it's up to the rider to judge if he manages to finish the current lap within the time limit.

The race turned out well: I held on to the lead group for about about half the first lap. After that we managed to form a second group, with amongs other's female world champion: Annika Langvad. This group split up and I ended up riding on my own after the second lap.

I slightly slowed my pace to allow any rider to catch up from behind, in order to form a new group, but no one came. So I ended up riding alone for almost an hour. Going out for the last lap I saw that I was catching up to a rider. I upped my pace but before I caught him two other guys caught me from behind. I went first over the last climb and just nailed it for the last 2-3km into the finish. I managed to create a gap and won my category, finishing 8 seconds before second and 9 seconds before third. 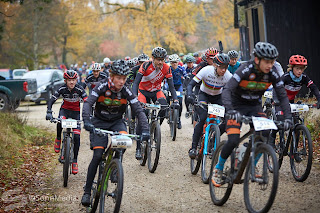 No racing for 4 weeks has rested my body, which is visibile in today's extreme max heart rate:

Posted by Alexander Lapajne at 21:07 No comments: