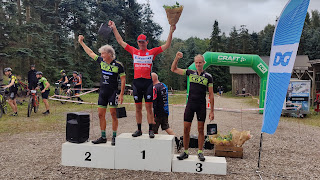 Finally back to racing in Denmark. These races have been few and far between since Covid started. Last one was in the autumn of 2020. That was also the only Danish race in 2020.
I love the Danish races because they usually have very nice and flowy tracks. And so was this one. It was a mix of gravel roads and quite fast singletrack. There were some technical elements (roots and short downhills) but it all flowed nicely.
An interesting thing in this race is that my category, M50, had their own start. And more interestingly there were more than 50 of us! 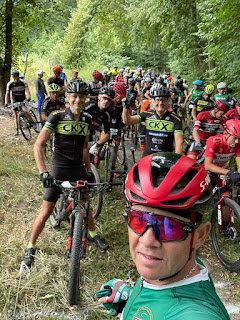 I had my pals Stefan Methander and Stefan Hellberg also racing. We all lined up at the front of the grid. As the race started we got on the start loop which was a double track/gravel road. I had Methander next to me and we both each had a rider in front of us. This felt like a good position for me but just as the start loop and gravel road ended and we made a sharp left onto singletrack one rider took the inside line and cut me off. He had to brake in order to make the turn and we lost a few meters to Methander and three other Danish riders (Hellberg was on my wheel at this point) who formed a group ahead of us. 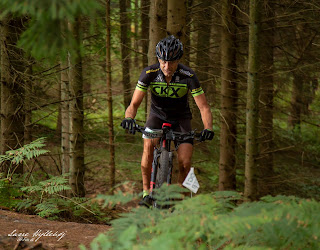 I got behind the guy who cut in front of me but he immediately started losing ground to the four riders ahead of us and I understood that I had to get around him as quickly as I could or I would lose the lead group. I tried to pass him a couple of times but as soon as I got next to him he sped up. Then I finally managed to get around him in a short but steep climb. So now I'm in fifth place.
I could see the group of four riders ahead of me, no more than some 50 meters. But they were cooperating well. As soon as we got out on a gravel road segment and I pushed 400+ watts I could see them team time trailing. 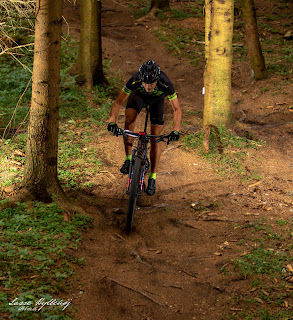 Towards the end of the first lap I noticed that the fourth rider of the group has lost ground to the other three and I was catching up with him. Just as we went out for the second lap I overtook him and again started hunting the three riders in the lead group. Alright, I'm in fourth place. Just one place short of the podium.
On the second lap I could see the lead group ahead of me, but again, as soon as we got to a gravel road section and I tried to speed up to catch up I saw that they were cooperating and drafting so I was not able to gain ground on them. Towards the end of the second lap I understood I had to give up or blow up. I start looking behind at this point, I've been solo for two laps so far, and notice that I have a group of three riders hunting me down who are not all that far behind.
I realize that I will get no respite in this race. I stop focusing on catching the riders in front and instead try to ride as smartly as possible picking the best lines and breaking as little as I can. In spite of this one of the three riders who are chasing me gets closer and close. A few times he's almost on my wheel before I manage to pick up speed and distance him again. Again he comes closer and again I leave him behind, mostly on the gravel road stretches. 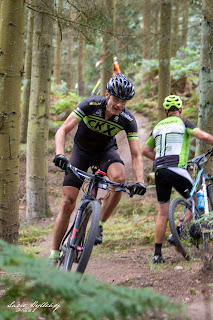 At the start of the fourth lap I notice that I'm catching up with one of the group of three riders ahead who has been dropped by the group. Great! I have a chance at a podium finish. I catch him just before a gravel road section and as we come out on the road I floor it. I'm third! I want him to lose my wheel directly and so as not to have him wheel sucking me. I want him to lose faith!
This works but not long after I notice that the guy who was catching me and the guy I passed have now joined forces and I have two riders cooperating and trying to hunt me down. A few times during the fourth lap they're close to catching me but they don't quite get on my wheel. On the fifth and last lap I manage to get a little more distance and I cross the finish line in third place. Methander gets second place and Hellberg comes in at 10th. 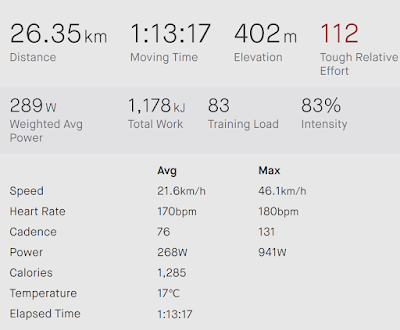 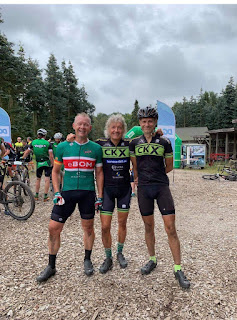 Posted by Alexander Lapajne at 21:27