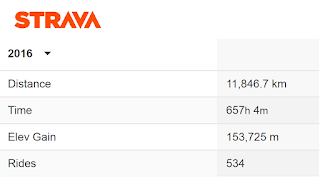 The main focus this year was on the marathon races;

In 2015 I had finished ninth at Beskidy Trophy and fifth overall in Långloppscupen. The plan was to do better in 2016.

As a bonus I threw in a new (for me) stage race:

I joined a new team this year: Team Bikeitaly BMC. And that meant a new bike brand: BMC!

These two bikes turned out to be great. I loved how BMC had designed both bikes with a long top tube and short stem. It made the bike quick to react and very playfull

Wheels:
Stans ZTR Valor. These wheels worked perfectly and are so light! It was especially very noticable when switching between the DT Swiss XR1501, which came with the BMCs, by no means heavy wheels, and the Valors. When riding the Valor wheels the bike just becomes so much quicker to react and accelerate.

I had never ever played around with rebound settings before. On all previous bikes I had just left the rebound setting at the default. Now, after getting shaken about in this year's Beskidy Trophy I started to experiment with rebound. I noticed that, by default, my BMCs had the setting at almost the strongest rebound. I changed it to somewhere in the middle and wow! What a difference! Instead of having to break in downhill sections because I was afraid of being thrown off the bike because of all the shaking suddenly the fork was working and helping me.

A large part of the training this year focused on Beskidy Trophy. As this race involves a lot of climbing (2000-2500 vertical meters per stage) one of the important things was for me to become really light. I weighed in at 78kg in December and my goal was to get down to the region of 72kg by May, when Beskidy took place. I actually managed to trump that and my lowest recorded weight was 70.5kg a week or two before the race.

The Beskidy Trophy also has many difficult, quick and dangerious descents. During my 2015 races I had lost a lot of time and places in the downhills and so I knew I needed to get better at that. It's a very demoralizing experience to get passed by riders going downhill, the same riders you struggled to overtake in the previous ascent.  I practiced descents by going to my favorite local downhill tracks.

Great start to the year

In January I was in Thailand and found a local race which went super! It was a lovely way to start the season. 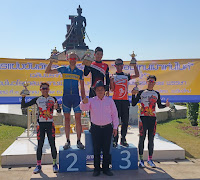 This was my big goal for the season. I had done the race the year before, in 2015, and finished 9th. I was back for more! I got my weight down to close to 70kg just for this race. I practiced the downhills. Looking at Strava after the race I had improved my times compared to the year before as much going uphill as downhill. In the end I finished fourth, just 60 seconds behind the podium. Very sad. You can read the whole race story here

Långloppscupen is our Swedish marathon cup which consists of 9 races, 6 of which add to your total score. I had a fifth place, in the total standings, from the year before to beat.
It started really great in the first race, Billingeracet, where I finished in second place. I may even had one the race if it had not been for a crash. I was so cold after the race that I missed the price ceremony while I was warming myself in the car. However, at that time I thought that there were going to be more podium finishes for me in the cup... How wrong that turned out to be.
I missed two of the races in the cup while competing at the Beskidy Trophy. And then crashed at one of the races. That means that all the six races that I managed to finish ended up counting towards my total.
My placings were in the races were: 2, DNS, DNS, 6, 9, CRASH, 10, 7, 5.
This ended up giving me a fourth place in the total stands for the year. Fourth is better than last year's fifth place, but the individual placings I was not content with.

At Engelbrektsturen it happened: I had the worst crash I had ever had. I was in the top-3 at the time it happened. We we're on a gravel road going real quickly. My rear wheel got stuck on one side of a gravel bank while the front wheel was on the other. The wheels started slipping appart and there was nothing I could do to prevent the crash. I went down at the speed of 56km/h and had to abort the race.

The crash also affected my confidence and it took several weeks before I was able to trust the grip of my tyres again. 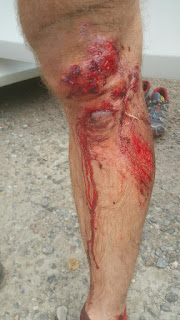 I got a cold just days before the race. I still managed to recover in time but the situation wasn't optimal. I hung onto the group of top-4 riders until about 12km to go when I ran out of steam and had to let them go. Still, fourth place was okay... but just hundreds of meters before the finish line I get caught from behind by one M40 guy and I finish in fifth. I really wanted to be on the podium and I think that without the cold there'd be a chance...

In 2016 I started to bike commute a lot. First because I had no car (I sold my bike transpoter in the Spring and there were a few months before I had purchased a new vehicle). Then, even after I had a car I continued to commute because it was training before breakfast and I felt it helped me drop weight before Beskidy. It was low intensity (typically with an average heart rate of 130) and I didn't think it affected my recovery.

It worked really well and performance in both the big race before Beskidy; Billingeracet, and also at Beskidy was really good. This in spite of practically no rest days before those two races. 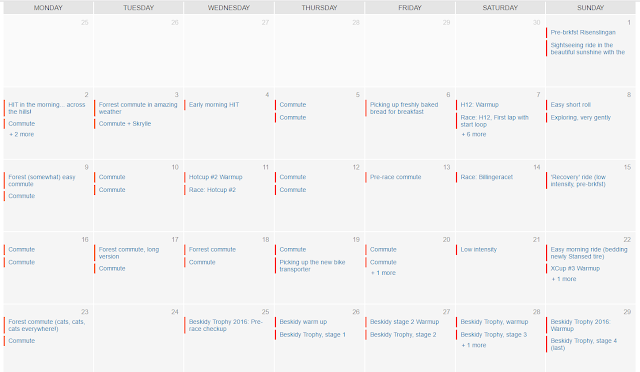 This is how my training schedule looked before Billingeracet


I cycled for 16 straight days ahead of Billingeracet. And then did my best marathon ever finishing in 2nd place.

Ahead of Beskidy I had the single rest day.

This actually worked for me early in the season.

However as June and July wore on I started to feel more and more worn out. So here I think perhaps I should've had more rest days and ALSO perhaps my bike commuting (which I continued) did not allow me enough rest. I actually checked the heart rate of my bike commutes and I'm firmly in Zone 2, which is NOT recovery, not in Zome 1, as I should be.

What needs to change and get better?

Posted by Alexander Lapajne at 07:41