Vintercuppen #6 - Performing well when I shouldn't be

This was the sixth and last race of the Danish Vintercuppen. Before the race I was in fourth place overall in M40.

I came back from Andalucia the previous day. I ended up aborting that race but with almost 5 completed stages I should have been totally knackered.

Waking up in the morning my motivation wasn't really there. However as we got to the race and I recognized the track I remembered it as my favorite from last year. It was a very hilly track with short steep climbs and descents. The track was either going uphill or downhill and nothing in between. Relatively short lap of 4km and a race time of  70 minutes + the lap, as always.

As the race started and the quick boys got away I found myself at the head of a group of some 10-12 riders. For the first couple of laps I pressed rather hard to get away from them and found my body responding. To my surprise my heart rate climbed above 180 in the steep climbs.

However I didn't get much of a gap to the group chasing behind, some 30 meters at most. I realized that I was pressing rather hard and wouldn't be able to keep it up for the whole 70 minutes. I slowed the pace and let them catch up.

For another lap or two they just followed me and then one guy in blue went around me in a climb and upped the pace. I got on his wheel and pressed hard to stay with him. As the pace increased the rest of the group started dropping off one by one. I was still on the wheel of blue guy, even though he was quick and I was maxing out.

After 2 laps on his wheel I had to let him go but as there was just one lap left to go and I didn't see any pursuers I felt I was safe. I crossed the finish line in second place, my best result of the cup. This also meant that I climbed to third place overall and got within a single point of second. 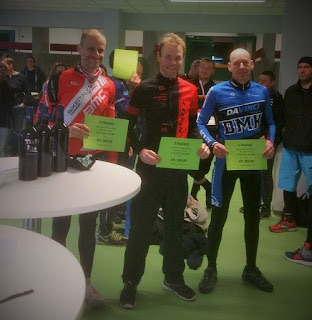 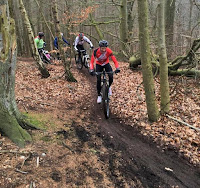 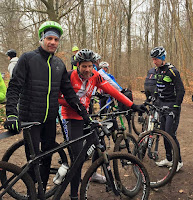 Posted by Alexander Lapajne at 23:08