Västgötaloppet - Worst race of the year

Last race of the Cup

The racing season has been long for me this year (my season started with the Andalucia Bike Race in February) but this was the last race. It was also the last race of the Swedish Marathon Cup. Motivation was not the best but I did manage to find the energy to swap the Thunderburt that I had in the back for a Rocket Ron. This seemed more appropriate as there had been a lot of rain and the track was going to be muddy.

Heavy legs that got lighter

As the race started my legs immediately felt very heavy but it all changed after just a few hundred meters. All of a sudden I was flying past a bunch of well known faces who I know are strong cyclists. I managed to hang on to the wheels of a small but strong group who went absolutely bananas during the start loop. As the start loop ended we had caught up to a larger group that had the eventual M40 winner, Robert Eliasson, in it. At this point I thought that either I'm going really quickly or Robert is having a bad day.

First half of the race

As we moved into the singletrack I lost Robert but there were still strong cyclists around me and the pace was good. The thing is that I expect the start of the race to hurt a lot and heart rate is high, but I know that it will get easier as people start to settle down.

Today, however, it was like I didn't have any time to recover. The pace didn't slow, and I just kept getting more and more tired. The well known faces that I had left behind caught up with out group and soon I had Daniel Grass, Lars Hansen and Jerry Olsson with me. 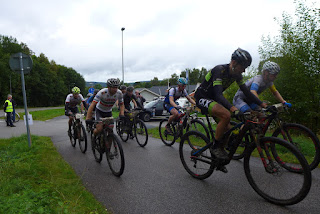 At about 30km, with every acceleration and climb still feeling like it took every ounce of energy from me, I started to feel that perhaps all was not well. Then, as we came around the stadium to lap at 40km all energy just left my body. I let go of the group and started thinking about aborting the race. Getting this tired just halfway through a race is not normal. I can't start doing damage control while knowing that I have 2 hours of riding left. After some thinking I decided to finish the race.

Typically when you hit this sort of a wall you notice it by your heart beat decreasing. It can clearly be seen from the graph below

After I had decided that I was going to continue on with the race I was at first too tired to hang on to any of the riders that went by me. But after a while I took some wheels and managed to hold them at least for some kilometers. Every climb that came just killed me. Each section of singletrack was muddy and there was never an opportunity to just roll along: Everything took an immense effort.

I finished the race in 14th place and that puts me in sixth overall in this year's cup. It's a disappointment as when I was planning the season I was aiming for a podium finish. Last year I came in fourth place in the overall standings for the cup

Posted by Alexander Lapajne at 16:20