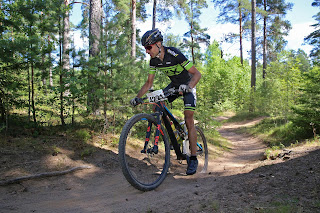 The start of the race was better than the past few ones. I was able to go really hard and advance up the field. VO2max feels good in other words

The warm temperatures and sun had made the sandy roads at the start really dusty. As we turned into a gravel road at 3km the dust was so thick that people started breaking in front as no one could see where they were going.

Already after 5km I notice that my bottle has gone missing. This is my first dropped bottle this year. I was using my large 1.1 liter bottle for the first time this year and I'm guessing that the bottle holder is a bit worn out and flexed too much. My pal Bo-Rickard Jepson saved my life and gave me a new bottle at 21km. And then tried to give me another one at 42km but I dropped it after trying to stove it into my rear pocket. Thanks Bo-Rickard! I ended up just drinking 0.6 liters for the three hours which wasn't enough on this warm and dusty day.

At around 20km I noitced that my rear wheel wasn't behaving properly. It was washing out wide in grippy turns and also the tire was bottoming out over some stones. I suspected that it had become deflated but I wasn't sure. I was in a really good group and I didn't want to let go of it. So I decided to ignore the fact that I should probably stop and do a quick refill with the CO2. After riding harder and harder to keep up with the group because the bike was more and more difficult to control I finally stopped at 50km to refill the tire with some air. I quickly checked the tire before inflating it and there was perhaps half the correct air pressure. The refill fixed it right up though and it didn't continue to deflate. My guess is that there had been a hole which had allowed the air to leak out but the Stan's fluid had fixed it.

Obviously I should have stopped earlier...

Dead legs for the last 20km

I had gone way too hard to keep up with my group and the last bit of the race I was just exhausted. People passed me left and right and I just suffered all the way to the finish line. The heart rate graph says everything:

Posted by Alexander Lapajne at 09:35