I've been considering partaking in one of these long-duration races for a while now. There's a big race in Denmark that I have in mind called H12. It's a 12 hour race which you can race both as a team of 4 riders or solo. I've participated in H12 many times, but always in 4-man teams. It would be interesting to try it solo as well. This weekend I got the opportunity to try out a smaller version of H12 very close to home: The Musette 6 hour race in Malmö.

When considering these long-duration races the terrain and type of course is an important aspect. There are marathons that take 4 or even 5 hours to do, but they tend to be largely on gravel roads. The Musette 6 hour race is 100% twisty and turny singletrack. Not a meter of gravel road, or any kind of road for that matter. This makes riding for 6 hours much harder than it a typical gravel road marathon would take.

Comparing this race to H12 I would estimate that H12 probably has about 50% gravel road. That should make it easier. But then it's twice as long...

Each lap of this race is about 4 kilometers long. It's 100% singletrack and has built section with drops, jumps and berms. It goes up down short but supers-steep climbs. There are few opportunities to relax and recover, in fact during the entire lap I only found two places to get out my bottle and have a drink. It's very good to know the track as you can optimise you speed through sections by not breaking too much. 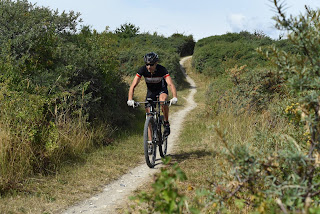 I participated in this race mostly as an experiment and not with the goal of winning it. I did not practice-ride the track before hand. The day before the race I did a five hour easy ride, which was not optimal. I raced on my "training bike", my BMC Teamelite hardtail, because I want to keep my two racing bikes fresh for the important races. A full-suspension bike would have been much better.

I had decided beforehand to just rely on sports drinks for my energy. I didn't want to use gels as, to be quite honest, I'm very tired of them and only want to use them in important races. I did have some power bars in my back pocket but the track didn't give me any opportunity to ingest them. 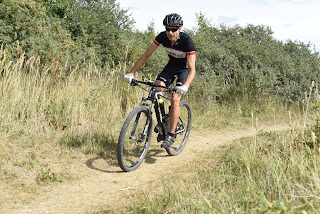 I started off quite happy and full of energy: The first lap I rode with my pal Fredrik (who did the race in a 4-mean team) and the next I got to ride with his girlfriend Jessica, who is also a dear friend of mine. So, yeah, the first hour was fun. I noticed that I was lapping at around 18 minutes and so a quick calculation gave me that I would do about 3 laps per hour, and that means 18 laps in 6 hours. That's a lot of laps...

I love to race, and racing is a great motivator for me. When I race I go 100% all-in. This race however I went in with the mindset that it was going to be an experiment; an interesting test to see what a 12-hour race could perhaps feel like. This may sound like a good idea in theory but once I was in the race going around the course I was somewhere in no-mans-land: I wasn't going hard, but it was still a race so I wasn't going slow either. Also the typical pain-relief that the adrenaline rush of a race gives me wasn't quite there. Which is why...

About halfway through the race I started noticing two things:

1. My left hand was in pain. Specifically the skin on the palm of my hand was chaffing. I have never had problems with this before. But then I wasn't using my normal "racing" gloves which have a bit of padding, I was using an old pair of gloves, that have no padding, and that I normally only use on my training rides. They've never given me any problems before but this ride was long...

2. My ass was in pain. Specifically the skin on my left butt cheek was hurting. Why? Well, again I was using a pair of old worn-out bibs that I would normally never race in. Each time the rear of the bike went over a bump it delivered a jolt of pain to my ass. Now, had I been on a full-suspension bike...

Had I been in race mode and, perhaps, had a clearer goal to achieve, these sorts of pains would not have been as noticeable. But here they were very annoying. I tried changing the grip that my left hand had on the handlebars as often as I could, but as the track is very technical I really had to hold on properly or risk crashing.

Between 3 and 5 hours into the race I had many thoughts of just getting off the bike and aborting the race. I hate aborting races. My friends were cheering me each time I went out for a new lap which was nice and helped. But what also helped was the fact that if I'd aborted they would've been there to witness it.

My pace dropped and my heart rate went down. The second half of the race I rode mostly in zone 2.

I finished the race. I'm happy with that. I'm also happy that I didn't get off the bike for any of the steep hills that each lap had.

Now, for the next time I do something like this: I HAVE TO TAKE IT SERIOUSLY


Posted by Alexander Lapajne at 13:57