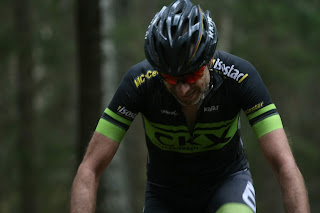 
Kolmårdsbiken was a race that I hadn't tried before. The race is south-west of Stockholm in quite flat terrain. The track is 55 km.

I mainly decided to race because my girlfriend, Sandra Backman, also was going so I thought it would be fun to try a new race. Kolmårdsbiken was on Saturday and I already had a race planned for Sunday so I knew that I would not be able to perform 100% at both, but the Sunday race was a local one which I'd done many times before. So I decided I wanted to try this new one.

I noticed that there were about 25 cyclists signed up for my class; M40.

It was just two weeks since Andalucia Bike Race ended and I had a cold which kept me from training for almost a week directly after that. I was a bit unsure of both form and how well I had recovered.


I took a chance on the start grid and lined up at the front. I didn't know too much about my opposition so I took a bit of a chance. Next to me were two pals: Viktor Ludvigsson and Erik Mattelin who both are young guys racing in the Elite category. They're very quick!

I had checked out the track and new that about the first 10km were on first asphalt and then gravel roads. I knew I had to stay with the lead bunch here in order to get a good ride up to the point where the single track started.

The start signal sounded and we were off! I've had problems getting off to a quick start before, when I'm not fully recovered and this happened today as well. As the guys went off at full speed I found myself dropping gradually down the field. However, as many times before, after just a kilometer or two I was up to pace and moving up through the field. I sprinted from group to group until after about 5km when I reached a group that was going really quickly. I started inspecting who else was in the group and then realized that I had made it up to the lead guys! Wow! Not too shabby!


As we entered the first single track segment (me last of all in the group) gaps started to form. I had Max Ashton in front of me and he let a small gap develop to the guy in front of him. When we got back out onto gravel road I picked up the pace and told Max to take my wheel and that I was going to catch up to the guys in front. I picked up another guy who was in front of Max, and then upped the pace on the next gravel road climb to reach another group of three riders.

We got some more singletrack done before we went back to the start/finish area and out on the second loop. I checked around and saw that there were six of us remaining in the group.

At this point I was really enjoying the terrain: Quite rocky and rooty but most of the singletrack was nice and flowy. Great fun!

Second Loop - The Group of Six Splits Up


The group stuck together through most of the second loop but towards the end there was some technical singletrack. I was at point at this time and had the other five behind. Typically I will try to keep a nice and even pace on singletrack but three of the other guys didn't want to do so, they went around me in a more technical section, and sprinted ahead. They didn't get far and I could see them in front of me. Of the two riders left with me another one passed me but he was unable to get away and I took his wheel.

As we got to the end of the loop we got some more gravel road. My first thought was: Great! Lets catch those three guys who got away. I could see them just ahead. I upped the pace and was soon getting closer to them. However, looking behind myself, I noticed that none of the other two guys were in the game and instead dropping back.

Just as we got to the start/finish area again to go out for the third and last loop I had caught up with the three guys and now we were a group of four riders.

Third Loop - Trying to Keep It Together


The third loop was the most technical one. It had quite a few rocky downhill sections and some obstacles with multiple routes around them. You really had to have your wits about you for this section, which was hard as it was towards the end of the race and everyone was tired.

Two of the guys in my group went ahead and I was unable to follow as I was too tired. The third guy also left me but I quickly caught him again because he crashed in one of the downhills. I asked him if he was okay and he replied that it was okay for me to continue. I raced on and he caught me again with about 10 km remaining and overtook me. With just a couple of kilometers left I was caught by another rider and too tired to hold his wheel I had to let him go.

I still managed to finish strong and a fifth place is not too shabby, for a first try of this race. I was 2 minutes outside of the top-3.

I really found the terrain to be excellent both with all the flowy singletrack and technical descents.

Power data seems a bit off so I'm not saying anything about that here. 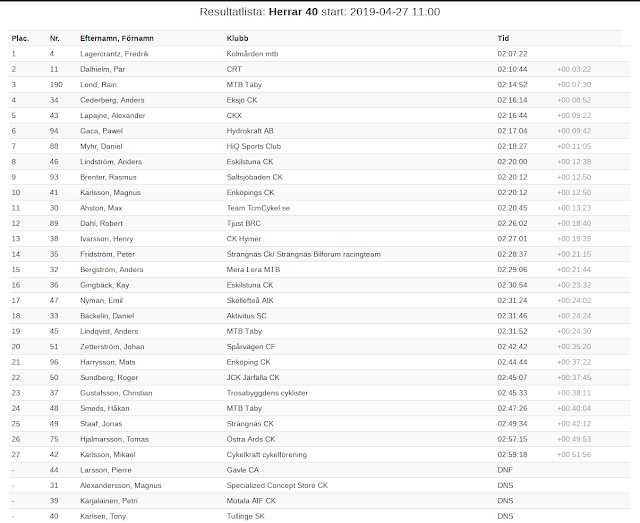 Posted by Alexander Lapajne at 16:01