Lida Loop has never been one of my favourite races. Why? Because of the terrain. There are slabs of rocks and lots of tall roots. We don't get that kind of terrain in the south of Sweden where I live. I have in fact not races Lida Loop that many times as it has crashed with Beskidy Trophy several times. I did the race in 2014 and came ninth. Then 2017 I aborted due to mechanical issues. Last year I came in 10th place.

Last year was a dry race. This year was not. Early on in the week all the weather prognoses foretold of rain. And the forecast came true. It was raining the day before the race, the morning of the race, during the start, and most of the race. Things got slippery. I don't like slippery.

Going up the first climb I was passed by pretty much everyone. The good thing is that just after the climb there are wide jogging paths where you can ride 3-4 cyclists abreast and so it's easy to overtake. Which is what I did. I realised how far back I was when it took me something like 10 kilometers to catch up with Max Ahston (no offence Max, if you're reading this).

Going out on the second loop we got to the serious rock slabs... and roots... and they were all wet and slippery. Robert Eliasson flew by me as I hesitated and tried to chose the right line over the rocks. A minute after that I crashed. It was a silly crash really: My front wheel got stuck on a root and I wasn't able to put down a foot so I fell over sideways and banged my left leg on a rock. My shinbone to be exact. It didn't hurt all that much and I was back on my bike in seconds. I continued to lose time and placing in this section though and I never saw Robert again.

I looked down at my left leg a few times and I could see it bleeding. But I didn't think much more of it.

As we left the rock slabs I started to pick up the pace again. The second loop had some nice climbs where I could go hard. I was leaving riders behind and that felt good.

And then I crashed again: I was lifting my front wheel over a tall root but as the wheel landed it bounced a bit to the right and my right handlebar got stuck on a tree and over I went. Again I got back on the bike in mere seconds.

The third loop is easy BUT it starts with an extremely rooty section. I wasn't quick. I got passed a lot. But then the terrain got easier with a lot of road sections. Which should have been good but at this point I was getting very tired. The last 12-13 kilometers I lost placing but with 8 kilometers to go, Tomas Berg (who ended up winning M50) came up from behind and with his help I made it across the finish line without losing further placing.


The thing with Tomas Berg coming up from behind was actually a bit funny because next year I will be riding in the M50 category so my performance on this terrible day was still enough to win me a theoretical first place finish in M50.

I crossed the line in 11th place.

After the race when checking my left leg I noticed that my injury was a bit worse than I had thought. It ended with a trip to the emergency room and three stitches. 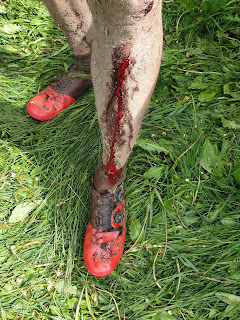 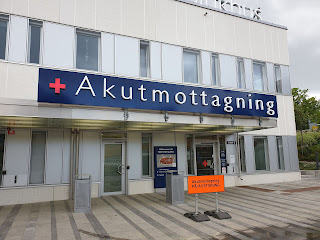 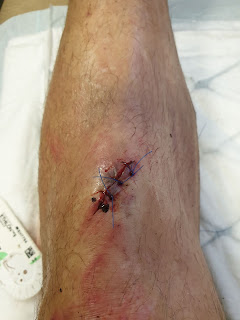 Posted by Alexander Lapajne at 14:08