Ränneslättsturen is the fourth race in Långloppscupen (I missed the third race of the cup while I was away racing the Beskidy Trophy). It's one of the races that I can reach from home base without a sleep over. There's a fairly large amount of single track in this race (for a marathon). It's also the only race in the cup with sections of A-lines and B-lines.
My two team pals Jerry Olsson (M30) and Martin Wenhov (M50) were along for this race and we're usually quite well matched so I had hopes of some cooperation.

Race story:
The start went well and I was in contact with the front group throughout the first part of the race. One unusal thing about Ränneslättsturen is that there's no starting hill to get over. This means no thinning out of the field. I don't really like this because it leads to a lot of hectic riding with tight and dangerous situations. I don't like using my elbows and I almost never do. So there was a crash after just a few kilometers and it occured just a few meters in front of me. I managed to avoid getting tangled up in it but I had to slow down to go around the mess. After this there was a lot of sprinting to get back to the front group and this cost energy.
After things started to settle down a bit  I could see Jerry at the head of the group where I was in the tail. He was going strong and perhaps some 20-30 meters ahead of me. Each time I looked behind me I could see Martin holding on to my wheel. There were a few times when the guy in front of me lost the wheel in front of him where I had to sprint to keep with Jerrys group. This cost some energy and I think, in retrospect, that some of those sprints were unecessary. Martin was smart and just held on to my wheel.
The hectic nature of the start of this race also meant that my heart rate was going through the roof and I never could quite reach my bottle long enough to have a sip. So the first drink I had was 30km into the race, MUCH too late. Same thing with gels; I could not reach one until then. This meant that for the entire race I ended up not drinking more than 1 litre of fluids and using just 4 gels. This is far from enough.
At just before halfway through the race I frst saw Martin in front of me as he went to the head of our 4-5 man group (Jerry's group had left us by this time) and pulled up a shorter gravel road climb. I noticed by this time that I had a hard time hanging on and I was already started to get tired.
I hung on for a while but when we entered a technical single track section half way through the race I realized that I would have to slow down. I did so and was passed by a few riders. After checking the split times after the race I now know that I was in second place (in M40) at this time.
I continued to ride on my own for about 10km and then, at about the 50k mark, Atle Hansen, with a huge group of riders caught up with me from behind. I accelereated and hung on to Atle's wheel for dear life. This worked better than expected and our group got thinner and thinner all the time. With about 10k left Atle went ahead with 2-3 riders and I hung on to a smaller group behind them. There was perhaps 4 of us. After a while, on a gravel road section, I decided to try to bridge the gap up to Atle's group (and leave the rest of my group behind). So I very optimistically stood up and sprinted, successfully leaving my group behind, but after bridging about 3/4 of the distance to Atle's group I ran out of steam. This left me really tired and the group of riders that I'd left ended up catching up with me again and passing me.
I did find a wheel to hang on for the last 10k of the race and finished the race completely and utterly exhausted. I was very surprised and pleased to learn that I had come in at 5th place in M40, less than one minute down on third place. Also, Martin was only 1.5 minutes ahead of me. It also gave me real joy to learn that Jerry had won M30 and Martin M50. My partner, Sandra, did even better however and won her first race in the ladies Elite category.

Conclusion:
This is the first time that I have come so close to complete exhaustion and still been able to finish the race really well

Epilogue:
I got the shivers when coming home after this race and ended up not going to work the day after because I was feeling so poorly 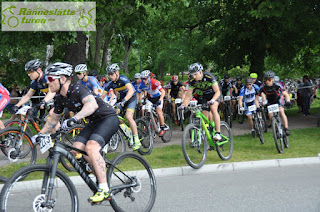 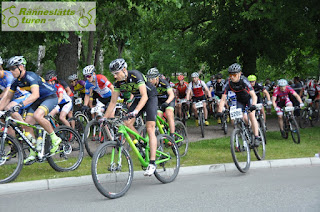 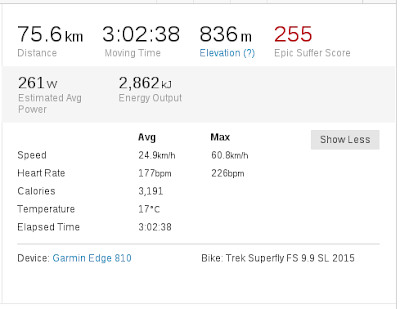 (Ignore the ridiculously high max heart rate, it's a glitch. Max was 189)

Posted by Alexander Lapajne at 23:37