The second winter cup that I'll be competing in is called "Wintercuppen". The races are in Denmark (as with Slushcup). This is my first time racing the cup. However the tracks are familiar from the other Danish cups. All the races are 70 minutes + the lap. This first course was quick with some very muddy sections.

I lined up right at the front. There was no seeding as this was the first race. We were just told to line up in a fair way. I had done a practice lap ahead and saw that the course turned into single track really quickly so being among the first few cyclist was critical. As the race started I got off nicely and entered the single track section in perhaps 10th place. My old adversary Palle was behind me but came flying past in the rough, beside the track, taking a shortcut through a turn.
Palle put another few riders between the two of us but I was able to get around them. However by that time he was at least 100 meters ahead of me. So I pushed the pedal to the metal and started hunting him down. After about half a lap at 98% of max heart rate I was able to catch up with him and two other riders. As soon as he saw me catch up he went to the front and accelerated.  I overtook the other two guys and attached myself to his rear wheel.
As the pace went up the other two guys dropped back and Palle and I started catching up with a group of two new riders. We soon joined them and noticed that they were keeping a fair pace. There was no way that I could go any quicker so I just concentrated on staying with this group. On the muddy sections a lost a bit of ground but I was able to gain it again on the quicker trails.
Just before going out on the third lap one of the guys in our group had a small fall and then there were just three of us. The pace was still really frantic and about halfway through the third lap, in a muddy section, I had to let Palle and the other guy go. I went on alone but was soon caught by the guy who had crashed previously. I took his wheel and the pace went up again. I could see Palle was not all that far ahead. However I was getting tired.
At the beginning of the fourth and final lap I let go of the guy's wheel and finished the last lap alone. No one caught up from behind. I finished the race in second place in M40 and in fifth overall. Heart rate was really good with an average of 180 and a max of 189. 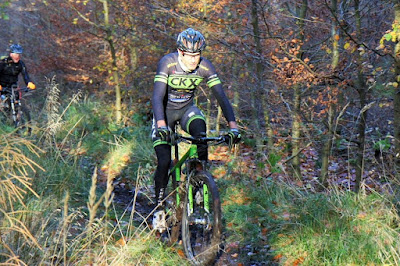 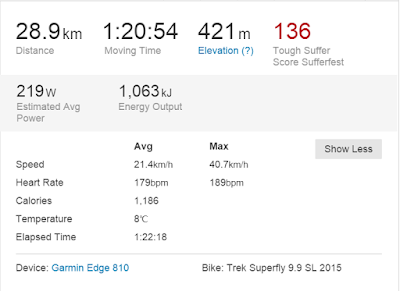 Posted by Alexander Lapajne at 19:15