Finnmarksturen - Trying to be brave again

This was my first marathon race after the crash two weeks ago. Also, the type of race was quite similar with a lot of high-speed gravel road and quick single track. I knew I wasn't at my usual confidence level yet but I was looking forward to the race just the same. Weather conditions were good with dry tracks and summer temperatures.

My weight is a couple of kilos higher than I would've wanted it to be due to not being able to train after the crash, and also due to some extra chocolate consumption because I was feeling sorry for myself.

As the race started I found myself in a good position. There was a long climb just 3km into the race which went on gravel roads. I wanted to have a good position over that climb. However as soon as I started going up the climb I noticed that my body wasn't 100% with me. The whole climb was really painful and I lost ground to the leading group. Checking Strava afterwards I found that the climb was almost half a minute slower than last year and that's a disaster!

As soon as I made the realization that I was not going to have a strong day decided to ride a tactical race: Ride smart, conserve energy, no unecessary sprints, stay with good groups and on the wheel of other riders.

I did manage to get back in with the leading group by sprinting after the climb. I saw Robert Eliasson far ahead in the middle of the group but then lost sight of him as we moved to singletrack.

About 10km into the race I found myself in a group of five riders; Three of them were elite riders and then there was one more M40 rider: Stefan Hellman. Now Stefan had placed in the top-3 of most of the races in the cup so far so when I saw that I was in the same group as him I started thinking that perhaps it was not going too badly after all. Still, I was hurting and struggling to stay with this group.

I hung with the group until we came to a short wooden bridge about 20km into the race. I noticed that it was really wet and it looked very slippery. However the riders in front of me got across without problems so I thought that I just needed to go straight across, and NOT to turn on the bridge. After the bridge the track had a tight right hand corner. As I got towards the end of the bridge I started to turn very slightly and carefully to the right but that was enough for my front and back wheels to slip under me and I was off the bike sliding over the bridge. I was back on my bike within seconds but I had lost the group and as I was already going all-out to stay with them there was no chance of catching up.

Soon riders came up from behind and after a while I found myself in a new group consisting of the three leading M30 riders, five M40 riders and some elite riders. We were now approaching the second part of the course which consists of 5 climbs spaced out across the last 35km of the race.

I went up the climbs carefully; starting at the back of the group at an easy pace and slowly moving up through the group. I was happy to see that I did not have any trouble keeping up.

As we got to the last climb I knew that we were not far from the finish line and so I decided to ride hard up this climb in order to drop as many of my M40 rivals as I could. I went over the top of the climb third in my group but had no time to look behind me to see if anyone had gotten dropped because there was quite a tricky section right after. I rode as quickly as I could here and with just 1km we got to a grassy section going uphill. Here however I was passed by all the other M40 riders and as the sprint approached I was at the back of the group. I didn't manage to outsprint anyone and ended up in 10th place, just a second down on sixth place. 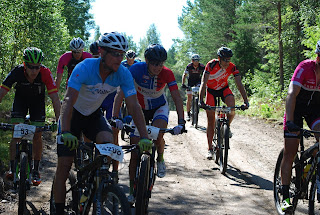 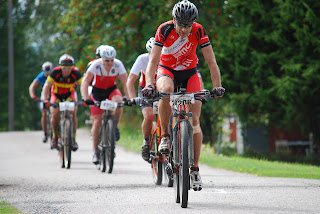 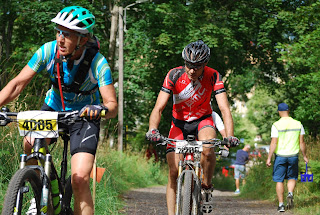 Posted by Alexander Lapajne at 12:27