Snapphaneturen - Slow in the slippery stuff

After some insane weather and rain during the night and early morning I changed plans in regard to which bike I would race. The original plan was the Fourstroke with the normal marathon-setup (easy rolling tires). At first I thought about just putting some grippier tires on the Fourstroke but in the end I decided that it would be fun to try the Teamelite in a marathon so I switched out the training wheels for a pair of Bontrager XXX with RocketRon 2.1 (the same ones I had used during Beskidy Trophy). So these were a bit more grippy but still quite well used and rather narrow.

When I arrived at the race location a the weather had actually cleared up and the sun was shining. However with the huge amounts of rain that had come during the early morning there was no chance that it was going to be a dry race.

There were some good riders in this race so I knew it was going to be hard. The pre-race favorites were Erik Mattelin (normally racing Elite), Mattias Israelsson, Robert Eliasson and a few others that I was used to racing against in the Swedish Marathon Series.

As we got off the starting line things went well. The race starts with a long starting loop first on asphalt and then moving on to a long gravel road climb. Everthing felt fine and I was up with the top riders. However, the gravel road then switched to a slippery and slightly muddy downhill section and here I lost all confidence in the tires (and in my abilities). I started braking way too much and lost contact with the front riders.

After the start loop you come back through the start/finish area and then there's another long gravel road climb. Here I managed to reconnect with the leaders and felt very proud of myself. This didn't last long however as the next singletrack section turned out to be slippery again and I lost contact again.

As the race progressed I started to get a bit more confident in the grip that my tires gave me. Also, perhaps, the trails started to dry up slowly and that also gave me more confidence.

I rode alone for a while and thent two guys came up from behind. We formed a group and the pace got quicker. After a while we lost one of the guys who dropped off the back. Shortly after that we caught up with a Danish rider and so we were a group of three again. One of the guys turned out to just ride the shorter distance and so we lost him after 43km. So with 17km of riding left there was me and the Danish guy.

I started thinking about how I was to go about crossing the finish line before this Danish rider. I knew that there was not that much riding left to do but that the last parts were quite hilly. I tried to up the pace in the first few climbs but didn't manage to drop him. He actually dropped me a few times instead, first on a climb and then on two muddy downhill sections. However once he crashed I had a bit of a gap, but he managed to pull that back.

So with 10k left we came out by the lake and I knew there was just three sections left: Solhem, a section of quick singletrack that criss-crosses a small section of forest, then out on an open gravel roadm nd after that there's just the dash to the finish which starts with a 2km long climb (not very steep). I started to plan that this last section was where I was going to drop the Dane.

I went on his wheel through Solhem, and then out on the gravel road where the wind blew a strong headwind. Here he surprised me by pulling quite hard all along this road, without asking (or giving) me a chance to take over lead. I was of course happy to let him do all the work. As soon as we got into the last 2km climb I went to the lead and went all-in. At once he let go of my wheel and after that I didn't see him again.

I crossed the line in ninth place. Not very happy with my performance. But a good training session nonetheless. 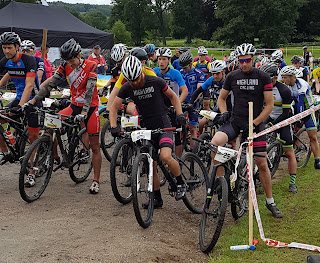 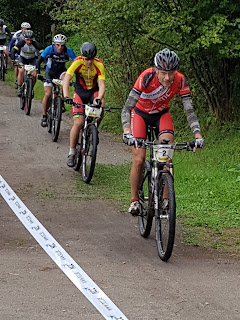 Posted by Alexander Lapajne at 22:35