I was unsure about whether I was going to participate in this marathon for a while due to its proximity to Beskidy Trophy. Only three rest days in between. After missing the Hotcup race Wednesday I felt better about doing Lida Loop anyway. It had been three years since I had participated as it had collided with Beskidy both 2015 and 2016.

Before the race I had problem with my rear deraileur. The problems arose early Saturday morning when I let the wrong bike shop look at my bike on a totally unrelated task. For some reason they adjusted the B screw of my SRAM Eagle deraileur. I noticed that the bike no longer shifted properly when I left the bike shop but I was to be picked up for transport to the race just an hour later so I did the best with the situation and managed to sort of adjust it. I did some more adjusting on the morning before the race but couldn't quite get it perfect.

As the race started the chain was skipping on the third and fourth cog. I was worried about damaging the drive line, or snapping the chain so I tried to take it easy when this happened. However towards the end of the second loop (out of three) I got a branch in my rear wheel, had to step off the bike to get the branch out, meaning I lost my group. Then, shortly after that, while the chain skipped again, it actually fell off the front chainring. I fixed that and got on the bike again.

I went ahead but started wondering if there was really any point in risking the driveline further, and all this for what was probably something like a 10th place finish. Also I knew that if I aborted the race it would mean some 1h45m of intense riding, from which I could recover before Beskidy. If I continued and finished the race I would be up around 2h30m and would need more time to recover.

So I decided to abort the race. It feels like a good decision.

The morning after the race, with all my tools and in my workshop, I got the rear deraiileur fixed. 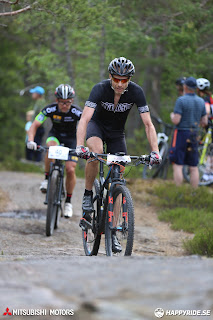 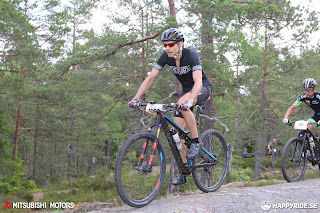