Ränneslättsturen - Tired and worn out

I've been on vacation in Slovenia since Beskidy Trophy, doing a lot of mountain biking in the Alps. I decided to prolong my vacation as long as I could so after 16 hours of driving during Saturday I arrived home late in the evening. The next morning I got up and we drove three hours to take part in this year's Ränneslättsturen. Perhaps not the best sort of race preparation. Well, that and the fact that instead of resting after Beskidy I had been doing a bunch of mountain bike riding in mountainous terrain meant that I had perhaps not had the best of recovery....

Leak Before the Race

One hour prior to the race, as I was ready with everything, and just straddling the bike while talking to my travel companion: Jonas Nilsson, I heard a pssshhhh noise coming from my front wheel. We tracked the sound down and found that the tire was leaking between the edge of the rim and the tire. Very strange as it had started leaking while I was just standing still with it. I opened up the valve core, poured some Stans fluid in the tire (luckily I had brought some), pumped the tire back up and rode around in circled for a while. This sealed the leak and there was no more problems during the race.


Things actually worked 'okay' for the first 2/3 of the race. I was in the top-10 and on the wheel of Stefan Hellman. But with about 25km left I started to feel very tired and I knew I wasn't going to be able to finish the race well. Instead of punishing my body over the last part of the race I decided to cruise the last part.

The next few days after the race I felt really tired and worn out. I slept around 12 hours each day during Monday and Tuesday. Something was probably not quite right in my body. 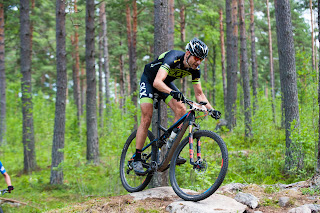 Posted by Alexander Lapajne at 14:21