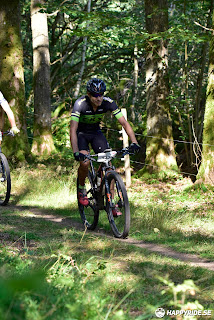 Bockstensturen, at 100km, is the longest race in the Swedish Marathon Cup ("Långloppscupen"). You'd think that it's also the quickest one so that the 100k would pass quickly, but it's not. It tends to take me around 4 hours to get around the course. This means an average speed of about 25km/h which is about in the middle for the races in this cup. It's a tough one. I've had some bad experiences here. Usually from going out too hard from the start.

Bockstensturen is also the first Marathon MTB race that I ever competed in. This was back in 2011.

Here are my results over the years:

I think that objectively speaking I did my best ever Bockstensturen this year. I did place better in my cat in 2014 but my overall placing was better this year. Considering they had added a bunch of new singletrack to the track this year the time is probably my best ever as well.

How did it all go down then?

As always with Bockstensturen it's important to hang with the quick boys for the first easy part of the race. This is the 17km going out of Varberg and towards the forest. It's all asphalt and gravel roads / double track. We averaged 34km/h this year but then it was rather windy and blowing headwind / sidewind. I did manage to hang on to the tail of the lead group for this first part.

Going into the forest and the first few climbs I dialed back on my effort. I've had many bad races at Bockstensturen by going out hard and I had decided that I wasn't going to have another one. I could see Daniel Grass power ahead in front going away from me. On the second climb Robert Eliasson and Stefan Carlsson caught up and we formed a group.

Stefan Carlsson was going really quickly and Robert did his best to stay on his wheel. I thought that the pace was a bit too high at this early stage but I just couldn't let them get away. It would've felt like a failure. Stefan did get away from us anyway and left me and Robert with a group of perhaps 5-6 other cyclists.

After a while we had dropped the rest of the guys and it was just me and Robert. Then I had to let go off Robert's wheel on a tricky downhill. I saw him not too far ahead of me on the following gravel roads but I didn't want to push it to catch him. I was thinking that if he wanted me to join then he would slow down and allow me to catch up. When he didn't I slowed my pace to allow a couple of guys coming up from behind to catch up.

During today's race I would catch a number of cyclists who were not having a good day (and who are usually faster then me). During the first half of the race I caught, Henrik Öijer, Erik Mattelin and Viktor Ludvigsson, all elite guys, who were going much slower than usual. I also ended up catching Daniel Grass after a while. He wasn't looking fresh either.

During the second half of the race I had a three man group: An M30 guy and an elite guy. We helped eachother along nicely and had good cooperation. I did notice for the last 30k of the race that I was on the verge of cramping up but things went well anyway. I caught and passed an M40 guy in the last third of the race as well.

I finished the race in seventh place and I was very happy with that result. In a hypothetical M50 race I would've finished in third place.

Posted by Alexander Lapajne at 06:16