This weekend I had two races to chose from: Saturday was the last race in the Hotcup series (2 hours + lap) . Saturday my personal favorite: Snapphaneturen (60km).

Now typically as I love Snapphaneturen, and it's a long race, under normal circumstances I would prioritize that race and not do the Hotcup at all. A Hotcup weekend race is after all 2 hours+ long and it does affect the performance if racing the next day. This year however there had been a lot of rain all week and I knew that Snapphaneturen was going to be slippery and muddy and I don't perform well  under those circumstances. That made me decide to do both races as the Hotcup race would be in one of my favorite places: Tisvilde forest in Denmark. Also Saturday was looking sunny and the terrain in Denmark was dry.

I did prepare for a weekend of two races by cutting down on my training during the week. I did a single session of 9x9min. The TSS (Training Stress Score) graph of my week ended up looking like this: 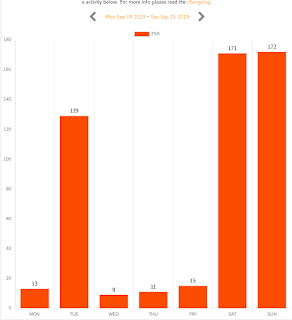 So how did it all turn out? The Hotcup race was great: Sunny meaning I could use short bibs and jersey. The trails were dry and quick. I was fighting for fourth place but had a crash on the second to last lap and finished sixth in the end.

In this race I had my usual Thunderburt 2.1" in the rear for easy rolling.

What about Snapphane the next day? I switched to Racing Ralph 2.25" in the rear. This turned out to be an excellent idea. I didn't feel too shabby or tired funnily enough.  However the terrain was slippery and difficult to ride. I didn't manage to hang with the really quick guys, Daniel Grass and Robert Eliasson, who finished second and third. But I managed to stick with the next group containing my old pals Stefan Larsson, Jerry Olsson and Martin Wenhov for most of the race, only letting them go towards the end. I ended up 15th overall in the race (no age categories).

Comparing heart rate graphs between the first and second race is interesting.

Rested I had a much higher heart rate at Hotcup compared to Snapphaneturen. Also the more flowy terrain and dry tracks of Hotcup meant I could push harder and more continuously and that also probably led to a higher heartrate.


Posted by Alexander Lapajne at 15:52