The second race in the Danish Dustcup was a bit difficult to analyze. A lot of rain had fallen during the night, however the sun was out during the day leading up to the race. I took the full suspension bike with wide grippy RocketRon/RacingRalphs. Race length was 65 minutes + the lap and the course was labelled as technical.

Race story:
We turned up a bit late for the race due to first driving to the wrong race location. It didn't take much more than 20 more minutes to get to the right place though. Note to self: Double check where Google Maps 'thinks' a road is located. I managed to test ride about half of the course. It was MUDDY. And the muddy parts were very hard to judge: There were big puddles, with varying depth, and there were long continuous sections of them. So a section of puddles could be a few shallow ones followed by some DEEP ones. The kind that would cause you to do an over-the-bar. I saw a couple of guys walking around with wrecked and bent front wheels after the race.
The start went a bit worse than usual. But after a few kilometres I had caught up with what I judged had to be the lead in M40: Henrik Söeberg was theere, so was Pelle Jansen, as well has Henrik Ahlbäck (now in M50 but still quick!). Towards the end of the lap I took the lead in this group... and then we hit the BIG MUDDY SECTION. I got uncertain and careful, braked too much, got stuck, and all the other guys went by me. Once I got going again they were some 50 meters ahead of me.
I started chasing after them and things seem to be going better again. I caught up with Henrik Ahlbäck but the rest of them were a bit further ahead. Right around here the back end of the bike started to feel sluggish, like it didn't quite want to turn. Also I felt that even though I really gave it my all I wasn't really going all that fast in the quick gravel sections. Something was definitely wrong with the back end. My speculation was that either my rear damper had lost a lot of air or my rear tire was going flat.
At this point I started to lose motivation and my mood went bad. I decided to keep pedaling unless things got a lot worse. People however kept catching up with me and passing me, especially in the muddy sections of the course.
At the end, with the race finished, it turned out that I had come in eighth place.
I checked the air pressure of my rear tyre after the race: 0.81 bars. So, yeah, nothing wrong with the bike but the rear tyre. At some point I had gotten a 'burp'
Conclusion:
What's up with all the burps I'm getting lately?? 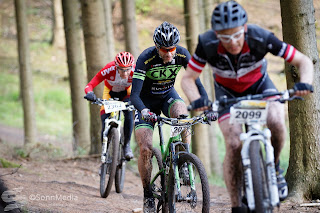 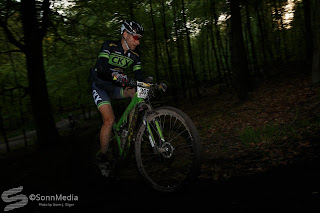 Posted by Alexander Lapajne at 14:03