The second race in the Hotcup series offered a wonderful technical and quick track. It had rained during the day but the track was completely dry and grippy. I went with the full-susp, the same setup as I had used during Billingeracet last weekend. I had sort of quickly patched up the front tyre after that race... it turned out the patch wasn't that good. I had run the bike a couple of times before the Hotcup race to make sure that the tyre held air and it was ok... at least then.

Race story:
I'm not going to make this a long one because I'm still upset by how the whole thing went. Let's just quickly cover the fact that I perhaps had the best legs/lungs of this year during the race. I led the race (overall!) for much of the second and third laps and had actually on a few occasions opened up a gap. Halfway through the third lap, while in the lead, I do a really bad ODB (over-the-bar) crash when the right side of my handlebars inexplicably get caught on a wooden post. I pick up the bike and keep going but quickly notice that my front tyre is becoming deflated. This was probably also the reason for the crash. I keep going, put in some CO2, get going again but air leaks out almost immediately. So halfway through the fourth lap I quit. I'm really upset about having to abort a race when it was going so well. 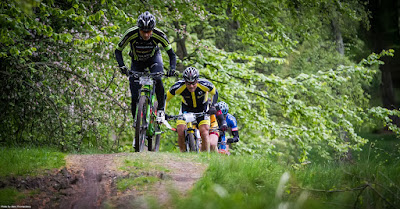