Finnmarksturen is one of the quicker races in Långloppscupen, meaning gravel roads and quick single track. However you do a fair bit of climbing (for a Swedish race). So it is tough. The weather this year was perfect: sunny and warm, but not too warm. The track starts off the way I like: With a substantial climb. I like it when an early climb separates the field; you get fewer tight and dangerous situations. This race was also my first in the first starting group. So after three years of racing the Långloppscup I was finally at the front! The practical consequences are that you can warm up later, closer to the start, and you don't have to fight for a good position in the starting field.

The start went well; there was a pace car up front but as always there was the usual commotion with people trying to overtake (on the sidewalks) and trying to get further up front. I took it fairly easy and let the overeager adrenalin filled guys pass me. There's no point in having an incident early on in a marathon race. Going into the first hill the pace car let the field go and we were off. I hung on the the rear of the leading group of some 50 cyclists and managed to get to the top while still having contact with the group. This is great because after such a climb the pace always picks up and you don't want to be behind trying to catch up. At the top of the hill I passed Robert Eliasson, but after that I did not see him any more. Robert has been quicker than me on most of the races this year.

I stayed in touch with the leading group of really quick guys until 11km into the race when we started to split up into smaller groups. Even after this the pace was quick and cooperation was good with people taking the lead of the group and driving hard. I tried to stay in the top-5 in our group and it worked out well. After the first hill there is a section that's quite quick up until half way through the race and you want to be in a good group.

At about the halfway point our smaller group of about 8 riders started to catch up with a larger group of about 20 riders. When we caught up, just by the lake, I saw two number plates on the backs of two of the riders: 4201 and 4202. This means that they are the two overall cup leaders of the M40 category. I was amazed that I had caught up with them because I had not even been close to them in the previous races of the cup.

The second part of the race consists of a section of climbs of between 50-100 altitude meters. There are five of them all in all, the last one ending som 5km before the finish. As we went into the first of the climbs the pace picked up and I moved to the back of the group determined to not lose touch with it. The group stretched and broke into smaller groups but I managed to hang on to one of the rear groups.

On the second of the climbs I was feeling fresh and decided to go to the front of our smaller group (with perhaps 5 riders) and pull a bit harder. This went well and I stretched the group. However, at the top of the climb, all of a sudden, there were suddenly no more course markers. Everyone was surprised but someone at the back shouted: "Hey guys, you've gone too far, it's left down here". So we all turned around and I went from leading the group to being last. This was rather annoying.

The penultimate climb is a long one and just before it Michael Johansson came up from behind with a team mate (elite category) leading the way. They set a brisk pace up the hill that I (and most of the other guys) had no way of following. I did hang on to the wheel of the only other M40 cyclist in our group. I was starting to feel the onset of cramps in my calves at this point too. I think that's the first time this year. I staved them off by stretching my legs.

On the last climb, with only about 8km to go, the M40 guy whose wheel I had been following started to edge away from me ever so slowly. After the hill I was alone and understood that I needed to set a quick pace so that no other M40 guys would catch me from behind. Motivation can be a hard thing when you're on your own. After a while I got help from an elite guy who came up from behind. I was pretty tired at this point but I dug deep trying to find the last of my energy. I had his wheel until about 3km left. Then I was on my own trying to go as quickly as my weary legs would allow me.

With only one km to go, the thing that was just not supposed to happen did in fact happen. Rolf Svensson and one other M40 guy caught up with me and I just had nothing left to give to hang on. The section of track with one km to go is rather bumpy singletrack and you need good legs to go fast. My legs were not good.

I ended up finishing seventh. After the race I had a look at my halfway intermediate time and they showed that I had been in third place at that time. Probably in the same group as the first placed and second placed guys. I'm still happy as I finished only 10 minutes after the first place guy in the elite category. I have never been that close. The 'Ranking' for this race is 10.0. This puts me in starting group 1 for the rest of the season and next year. CORRECTION: The ranking has been changed. I'm still in group 2.

Conclusion: My form is progressing really nicely now and the weight loss has had good effect. Yeah, I still go out very hard but right now I'm almost able to keep it together to the end... almost... 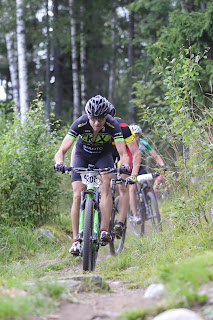 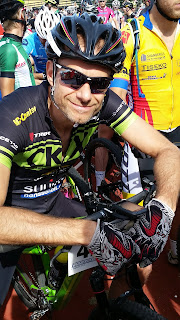 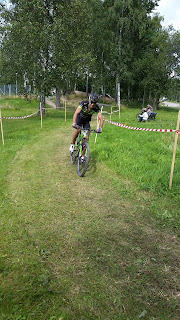 Posted by Alexander Lapajne at 21:03