If you look at the blogg you may notice that I haven't done many of the Hotcup races. I've missed the last three races (due to other races) and you're allowed to subract only one result, so my total standing is not relevant.
During the night leading up to the race I was waking up soaked in sweat and with a sore throat. Throughout the day I was unsure whether I should take part or not. As I did not feel any worse I decided to race: It's hard to say no to a good race. Now, writing the blog the day after, I can deduce that it was the wrong decision as I now have a cold. Ouch! Now, I may have gotten a cold even if I hadn't raced, but I don't think so.
The race was 80 minutes + the lap and on new trails. Fun! The Hotcup races are always fast and furious and this would turn out to be no different.

We lined up in the starting grid with me in group 1. I had perhaps 10 riders in front of me.The start was supposed to sound at 18:30 hours. However at 18:28 there's a vague shout from behind: "Start!". There's confusion everyone with people asking "Did he just say start?" and then we're off.
There are 5-6 guys up at the front of the pack, all in red jerseys, and they're covering the entire width of the gravel road. We're on the start loop (gravel road) and the pace is moderate so I understand the situation as these guys being the "pace riders" and that they will at some point get off the track and the we will be free to overtake. So I'm in around 20th position waiting for the pack to be set free so I can move up in positions while still on the gravel road of the start loop. However the 5-6 guys in red jerseys up front don't get out of the way and we actually get into the first singletrack section with them in front. As the pace is moderate the field has not been stretched out at all and total chaos ensues when everyone tries to squeeze into single track. I realize that I'm way too far behind and out of touch with the quick guys.
After just a few hundred meters of singletrack the guy in front of me falls and blocks the entire trail. So we wait for him to get back on his bike. Then I start making up ground taking position after position. I realize that I'm way too far behind to catch up with the quick guys.
I catch up with a group containing Stefan Methander and start moving up in that group. Soon after that Stefan crashes but is ok. I move to the top of the group and start getting a gap. One of the riders hangs on to my wheel: On technical sections the gap opens up and he falls behind but he catches me again on the short climbs.
After a while I see the yellow sweater of a Team Roslins cyclist in front of me. As I catch up I see that it's Luke Grindahl. Luke and I take turns driving hard and we quickly distance everyone else behind us.
Towards the end of the race there's a lot of lapping slower riders. A quick guy catches up with Luke and I just before the end of the last lap. But a he turns onto the finishing gravel straight, only 100m before the finish, his bike looses grip and he falls. He blocks me the most and I go right of him while Luke gets a straight line and goes left of him. So Luke finishes in front of me by a few seconds. I finish in sixth place.
I ended up having a really intense race (high heart rate!) on a fun track. But when you lose as much ground as I did due to bad organization it's a bit frustrating.
One of the really positive things was that after the race one of my compeditors came up to me and said: I tried to follow you and I was able to in the easy terrain but in the technical stuff you were just too quick. That's probably the only time ever that I've had that said to me. 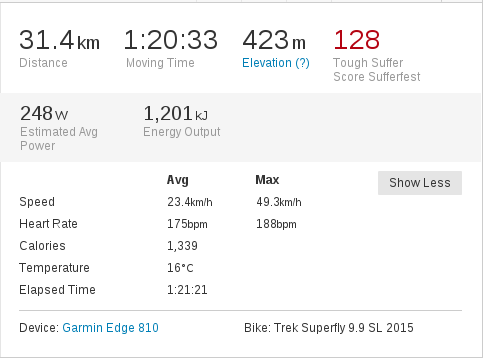