Snapphaneturen is a marathon MTB race with one big difference from most other marathons: It's mostly on single track. This leads to tough technical challenges and total exhaustion as there are few opportunities for rest.
Snapphaneturen was my first MTB race back in 2010 and I've raced every year since. I have some of my worst memories from this race, not because there's anything wrong with it, but because the first few years my physical form was not up to snuff for the tough races. The first three years that I did this race, I had to stop at some point during the race, with leg cramps.
The race course had been redone for this year's race so instead of repeating the same loop twice and doing 75km we did one loop which was 60km. This seems easier however the amount of singletrack had been increased for this year's race.
I was a bit worried that having racing Vaude Trans Schwarzwald last week I would not be fully recovered. My body felt sluggish during warmup.

I found a good starting position at the very front of the start box. The start loop went well and I was around 15th place for the first part of the race. Really early on I got a branch stuck in my rear deraileur and partly in the casette as well. This was a bit of an annoyance as it, at least for a while, prevented me from using the highest gears. However it came free from the cassette after a few km and while it was still stuck in my rear deraileur it didn't do much harm other than make some annoying noises.
Soon a group formed with Johan Malmsten, Robert Eliasson, a Danish junior, Björn Österberg, Nico and another guy whom I didn't recognize. The pace was good all along and we were making good progress. About halfway through the race Nico noticed that his bike computer had fallen off and made a u-turn to get it. I later heard that he DNF due to a crash and bike problems after that.
With about 20km left our Danish junior started pushing harder on the climbs and I clung close to his wheel. Him, me and Robert Eliasson got a breakaway going from the rest of the guys and the gap started to widen.
Upon reaching a gravel road climb with 15km to go the Danish guy upped the pace another notch and I had to let go, Robert hung on for a little while longer. Just a few km:s later Björn came up from behind and went past me. I had no power to follow but I felt I was still making good progress.
Being alone I concentrated on keeping the pace high and I noticed someone approaching from behind, but I couldn't see who it was. During the last downhill section I manage to get ahead of the unknown cyclist behind me and then I just went all-in knowing that there were not more than 10km left.
With about 6km left we got out on a long gravel road and I had a look behind me and noticed that I had a gap of 200-300m to the chasing cyclist. Afterwards I learned that it was my old Danish nemesis, Henrik Söeberg but he was also with Martin Wenhov and Jerry. I had no idea that it was actually a group chasing me!
The gravel road turned into single track going gradually upwards at a slight incline. I looked back a few times but saw noone. Then a short downhill section followed by the super steep climb called "Hard rock". I felt quite safe going into the climb as I could hear noone behind me. But then, suddenly, at the top of the climb a cyclist had caught up and was on my wheel! It felt like he had come out of nowhere!
I realized that in order for him to catch up so quickly during that short and steep climb he must've gone all out and was probably at max heart rate. I had just concentrated on keeping a steady pace up the hill and was not that maxed out. So just after the hill there's a level and slightly bumpy grassy section where I pushed the pedal to the metal! A short downhill section followed, still at full speed. Then just a km to the finish and glancing behind me I saw that I had a gap of about 30 meters.
I was able to finish ahead of, what I later discovered was Danish ace cyclist Henrik Söeberg. I was very happy with my seventh place finish (overall, no age categories) 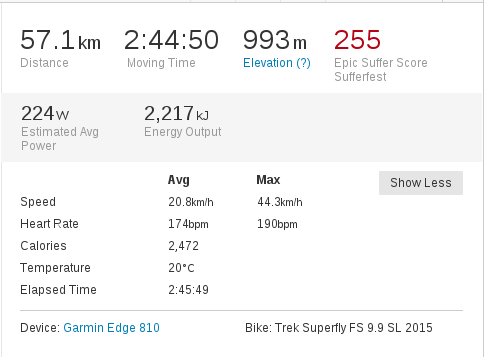 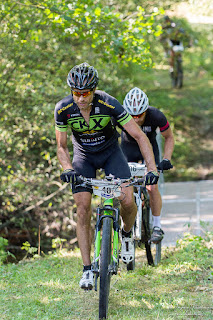 Posted by Alexander Lapajne at 23:02