Well, it was cold and miserable. One degree Celsious and raining throughout the race. But I had perhaps my best race ever finishing in second place.

I had a really good starting hill where I came up first in my category (M40). After that I didn't see any other cyclists from any of the Master categories. I just rode in groups with Elite riders (you can tell by the number series on their backs).

At one point one of the Elite riders in my group called out my name: I turned around and looked at him. He said: Alex, you must be in the lead in the M40 category. I had no idea what he was talking about, I was sure that there had to be at least some M40 rider that had gone ahead which I told him.

With about 20km left, while I was in this really quick group with 5 Elite riders, my left pedal struck a root and I went flying over the handle bars. My Garmin bike computer went one way, my glasses the other way. I picked up both in one hand and was so stressed that I didn't even try to place the bike computer back in its holder. I just got on the bike and pedaled. I saw my group of riders disappear in the distance and started realizing that there was no way I was going to catch them. Still, stressed out, I managed to clip the bike computer into the holder... the glasses I just threw away and then I went full ahead rushing down the single track at crazy speeds, but to no avail. The group was gone! After a while I noticed that my handlebars hade gone crocked in the fall. I looked behind me; There was noone coming up. So I just stopped and straightened the bars.

I started riding a little bit slower, realizing that with 20km left it would be stupid to try to go the rest of the distance alone. I decided to wait for someone to catch up from behind

After a while I noticed one biker slowly catching up. It turned out to be Stefan Hellman, an M40 rider. Shortly after this an M30 rider caught up as well. We formed a group of three riders.

The race finishes with a double hill. The first one starting at about 70km, and the last just a km before the finish. Early on in the hill the M30 rider dropped off the back. Stefan Hellman started going hard up the hill and I managed to just hold on to his wheel. However, just before reaching the top I had to slow down and he got a gap of about 20m. After this I never managed to catch him again. Up the last climb, 'Strupen', I went as hard as I could, looking behind me all the time, worrying that someone was going to catch up. Instead I almost caught up with a rider in front of me (unfortunately from a different class).

I crossed the line and quickly ran to the officials who told me I had finished second. This was the first time I realized that I had actually done a really good race. I was overjoyed and punched my fist in the air. I don't think I've ever been as happy in my life. The competition had been fierce, pretty much all the best Swedish M40 riders had raced, and I had placed second!

I missed the price ceremony because I was sitting in my car thawing. So no podium photo :(

One more result link (if the first one doesn't work) 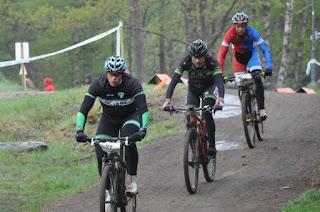 Suprisingly low heart rate. Both average and max. Weird! Usually that would mean I was not rested enough but then I should've performed worse as well

I decided to ride my full-suspension BMC Fourstroke XX1. The reason is that I wanted to save my legs in what I knew would be a long race. This worked out perfectly. I actually ended up using the Downhill mode of the Fox 32 CTD dampers over the rooty parts to make the ride more smooth (and also of course in the downhill sections).
I used my light Stans Notubes Valor carbon wheels. These are really light and accelerate so nicely. However, I feel now afterwards that I had inflated my tires a bit too much. 1.7 bars was too much for all these roots. 1.5 would have been better.

This is the fourth year that I participate in Billingeracet. I've logged all four years on Strava. It's really fun to look at how I've gotten faster.

Posted by Alexander Lapajne at 19:03