I don't often do team competitions. Mostly because I don't like to rely on other people (hm, that sounds harsh...). H12 is a Danish 12-hour mountain bike race which can be competed in as a team of four riders. We decided in our team, Scuderia Bike Italy BMC, to race H12 this year. Our strong rider was going to be Warren, but just a few weeks prior to the race he injured his hand in a race. Anton replaced him. So the team was: Anton, Jonas, Phille and I.

The race draws a large crowd. The men's team competition had some 250 teams registered. Many of the best riders take part in this race. So we knew that competition was going to be strong.

The race takes place on a track where one lap is 11km long and a mix of single track and gravel road. The single track parts are quite rooty and rocky and there are some seriously steep, but short, climbs. It's not a track where you get many opportunities to take it easy.

We had decided on running one lap per team rider. We calculated on it taking about 30 minutes. It's rather intense so you run the entire lap at close to maximum heart rate. It's smart to make many short stints.

I took the first lap and managed to get us into tenth place. Jonas took the next, then Anton and lastly Phille. After a few laps we were switching between seventh, eight and ninth place, depending on who was riding the team's stints, and how fast the rider for the opposing team was. We were really even within the team, never more than a minute or two from eachother's lap times.

When we got about halfway through the race our placing had more or less stabilized at seventh place. However the eighth placed team was just a minute or two down. So we felt the heat from them all the time.

As evening was getting closer we realized that we may have to max out the team. I started to take extra laps. Chance had it so that I also went out on the last lap. I wasn't sure how far behind the rider of the other team was but I went all out anyway. However, with only 2km remaining of the last lap, he caught up with me. As he went past I managed to take his wheel and a frantic chase began. For the remainder of the lap I was on his wheel but I didn't find a way around. I made a last effort on the finishing straight but it was just too narrow and I couldn't get around him.

An eight place is still a great result and the whole team was happy. I still felt like I had let them down though.

With the terrain being as rough as it was, AND with the length of the race (I did 7 stints all-in-all, so close to 80km and almost 3.5 hours in total) it was so nice to have the full-suspension BMC Fourstroke. It really saved my body and I was able to perform good lap times all through. My last lap was actually my third fastest one! 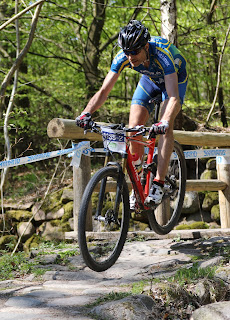 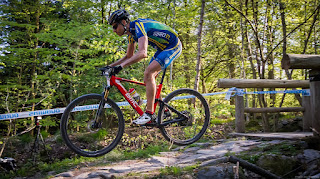 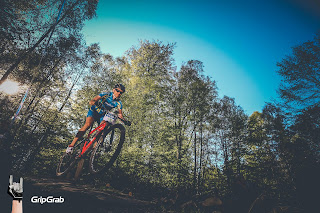 Posted by Alexander Lapajne at 22:34