Mörksuggejakten is the fifth race in the Swedish Marathon Cup (Långloppscupen). This is a nice race with a looong starting hill. The race is rather quick with some longer gravel road section and also quick and hectic single track. A fun race!

Being tactical with the long starting hill I decided to race my hardtail, the BMC Teamelite. I had weighed it at home prior to the race and it came in at about 8.75kg. This is a full kilo less than my full suspension. It's a bit of a risk but then I'm a risktaker so...

Race day was beautiful and sunny. I was figuring a finishing time of around 2.5 hours so I thought I could get buy on one large bottle. One thought was to plant it at the top of the starting hill and take it as I went buy after the climb was done. But we got to the track a bit too late as we had to stay in a hotel 2 hours driving away. So I started with the bottle on the bike.

Apart from a small misshap with getting into my pedals right as the starting gun banged I thought I was in a good position going into Vidablick, as the climb at the start is called. There's a small section through the town of Rättvik, before you get to the climb, and there I tried to be aggressive and stay as close to the front as I could. It went ok.

Going up the hill felt good. I was passing riders left and right and could see the front of the field ahead. Strava later told me that this section went 20 seconds quicker than last year. Just after the climb I actually caught up with my pal Erik Mattelin who's a really quick guy racing in the Elit category. I had not been near him in the previous races so this gave me an indication that things had gone well this far.

After the Vidablick climb you have to be really careful, focused and quick. After a while the track starts going downhill over rather bumpy and messy terrain. You need to keep a quick pace here because after this section comes a long part which is on gravel road. You need to have good wheels to follow there. However the bike felt very stiff and bumpy in this downhill part and I had to let some riders pass. After a while also there was a rider standing standing right in the middle of the path with his bike. I decided to try to pass him on the left and just as I was doing this he decided to trip and fall to his left. I had to stop and wait for him to get up. More riders went by.

Getting to the gravel road section I took the wheel of another quick Elit rider: Viktor Ludvigsson. Also a pal of mine. He's a sturdy guy who has some really strong legs. I tucked in behind him and let him pull me along. After a while our group grew and we were around 10 riders. The pace was frantic and I contended myself with just hanging on at the rear of the group. As we hit some dubble track Robert Eliasson with two or three other riders still managed to join our group from the back.

As we moved into some really bumpy single track I again noted that my bike was so stiff that it felt like it was shaking apart. Things got so bad that I lost my water bottle, and didn't notice until Robert Eliasson pointed it out to me. Frak! I was going to have to solve this problem somehow. Inspite of all the shaking and bumping I held onto the group, actually going up in front and pulling hard in some sections.

The group more or less held together until there was about 10km left and the pace went up considerably. The group split in two and I was in the back part together with Robert Eliasson. Then a few kilometers later I had to let go of Robert's wheel too. I rode the last part to the finish alone, not catching anyone but not getting caught either.

So did the gamble of riding the hardtail instead of the fully pay off? Well, I was 20 seconds quick up the starting hill. But then things were rather bumpy afterwards. I think that if I had gone a bit quicker downhill after Vidablick then the gamble would definitally had been a good one. As it was now... Hard to tell...

This is a graph of my times for the Vidablick climb. All four years that I've raced Mörksuggejakten (click on it to get a bigger graph):

The aftermath of all this is that I realize that I have to start looking at my damper settings. The bike just shouldn't be this uncomfortable going downhill. I had already decreased the tire pressure from 1.6-1.7 prior to the last race to 1.5 for this race. That should be enough. Now, the lockout has been a problem throughout the season and was today as well. But I also need to look at Rebound settings.

Movie from the start of the race 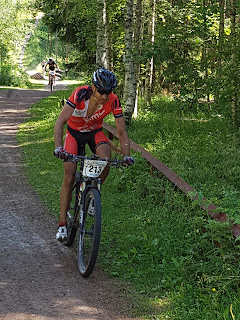 Posted by Alexander Lapajne at 12:46