Engelbrektsturen - Crash and a trip to the emergency room

I had decided to really push it at the start to get a goood position. Something that had been a problem in a couple of the latest races. This worked out really well and I was where I wanted to be when the first climb started. I overtook a few guys but the fact that I was already so far forward meant that it was not as per usual: me going around a bunch of people. But this is good.

The first climb of the race, "Maskinvägen  upp", I did with an average heartrate of 192: 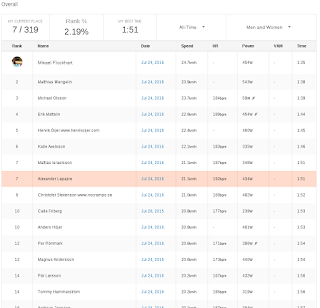 After a while a group formed and I saw a bunch of elite riders, and Robert Eliasson and Stefan Hellman från M40. These guys are the quick boys and it turned out they came first and second in today's race.

However, it did not end well for me as after about 20km I had the biggest crash I've ever had. It was on a quick gravel road going about 50kph. There was a slightly raised string of gravel at the center of the road and my rear wheel slipped on it. I went skidding along the road for a few meters and then into a ditch. The guy behind me did the same and landed next to me. And another guy just a few seconds later. So there were three of us lying in the same ditch. As soon as I landed I realized that this was no ordinary crash. I was quite shocked. Got up and examined myself. My left leg was rather badly hurt. Blood everywhere. The other two guys seemed worse of however and I decided to go for help. I slowly walked to the first official and told them about the two injured guys. She called an ambulance.  I started walking back towards the start. I was lucky enough to hitch a ride from a spectator. Lucky as it turned out that I was the furtest away from the start/finish area that I could be anywhere on the course.

At the start/finish area I found a medic who said that my injuries would have to be treated at a hospital and that there was nothing she could do. The hospital was in the next town. And Sandra still had about an hour to go before she finished her race. So I went into the neatest store to get something to drink. I got some funny looks from the other shoppers.

After Sandra had finished her race we drove to the emergency and well, 9 shots, 6 stiches, one x-ray and three hours later we were on our long drive back home.

I checked Strava and the speed at the time of the crash was 56.2km/h 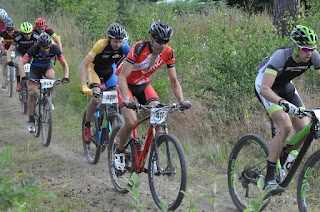 This photo is from about an hour after the crash: 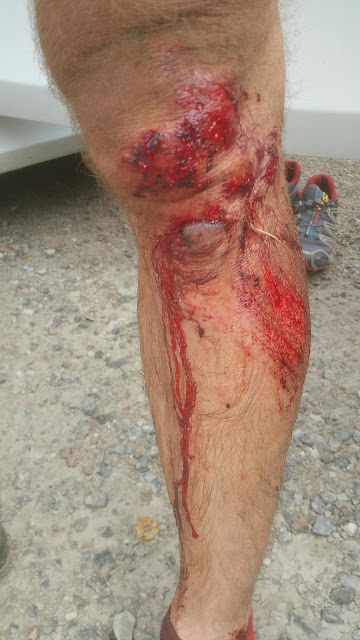 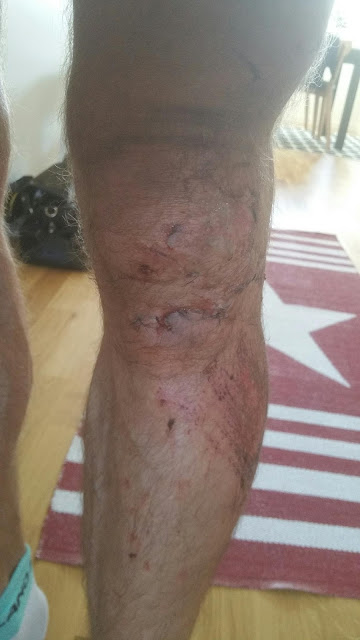