So, what happened? Well, most things went to heck!

We arrived early on Friday morning for the practice session starting at 10:15 (the race start was at 14:00). Just to discover that the promoters had decided to move the session to 08:00 in the morning, which was 1.5 hours ago. Had they informed anyone? Sure, on their home page. But when I checked the home page schedule the day before the practice session was still listed. So I'm guessing sometime in the evening. Did they email all participants about this change? No.

But, I mean, they wouldn't change the ACTUAL COURSE without informing people, right? We had tested the course out 2 weeks before the race and checked the different A-lines and B-lines. I had decided to just do the B-lines (although I wanted to try one of the A-lines during the practice session that was then moved). Well, the race started and the first A/B-line split that I came to THEY'D SWITCHED THE TWO LINES!! The B-line was right and the A-line left two weeks before the race, when we tested the course, and during the race it was the other way around. I stopped dead at the start of the A-line, realized that I was not where I thought I was, had to get off the bike and lift it over to the B-line. I lost about 20 places doing this.

After that my mood was shot to heck. It didn't help that the skies opened up just before the start and that also during the race heavy rain fell. The track was made slippery and very hard to ride by all the water. The B-lines became as dangerous as the A-lines due to them being on lose soil.

At first I was just going to quit after one lap but I decided to finish the race. I just decided to look at it as a training session. I did however take it very easy and took absolutely no risks. I didn't want to crash and risk my participation at RACES WHERE THE PROMOTORS ACTUALLY KNOW WHAT THEY'RE DOING!!! 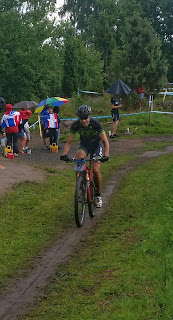 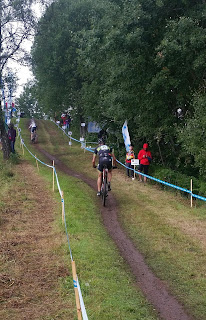 Posted by Alexander Lapajne at 12:14