The race started well. The first part going out of Varberg towards the forest was unusually hectic. The elite boys at the front set out at supersonic speeds. I checked my logged data afterwards att it seems we were doing some 67km/h at some point on the paved roads. I managed to hang on to the tail of the front group. As we got on the gravel roads the pace dropped slightly and it was easier to hold on.

The gravel road started going uphill into the first climb. As usual I set my own pace, which is that I try to ride the entire climb at an even speed. This often means that other riders go faster than I at the start but then I start catching them towards the second half of the climb. This happened here as well and climbing felt good.

After a while I noticed that I was in a group with Stefan Hellman who is usually leading or close to the lead. I had a suspicion that the two of us might be leading the M40 category. Things continued well but at some point I had to let the group go during a messy downhill. Still things felt good as Robert Eliasson came up from behind. Also Henrik Mård joined and we formed a group. We caught up with Mattias Isrealsson as well.

At about 60km I started getting more a more tired. I let go of my group in another messy downhill and rode a while with Mattias Isrealsson. At about 80k I had to let go off his wheel as well.

As I left the forest and started back towards the finish in Varberg there was a heavy headwind blowing over the open fields. I struggled on by myself until a larger group caught up from behind. It was a nice mix, however just one M40 rider. I noticed that Rolf came up and also Daniel Graz. I was getting really tired but managed to hang on until there were fewer than 10k left.

I rolled towards the finish and came in 7th place. 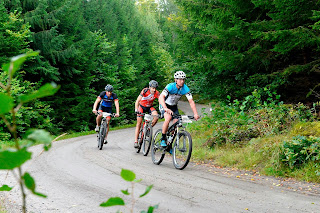