I took a bit of a gamble this weekend by first racing in the Swedish Championships yesterday and then today I had the next race in the Swedish Marathon Cup: Finnmarksturen. I did prioritise the Swedish Champs and so the two races came in the correct order. I knew that I was not going to perform as well on the second day of racing.

Typically when racing several days in a row I notice that I'm not able to peak as high as I would when I was rested, however I am still able to produce good average power. My heart rate will not reach the same kind of peaks. In practical circumstances this will typically mean that I will not be able to sprint up a hill, or sprint for the finish line, as well as under optimal circumstances.


It had been raining for an hour or so leading up to the race but just before the start the rain had stopped. Wet roots and rocks were expected.

I started the race a bit more defensively than I normally would; I placed myself a bit further back in the grid. When the race started I didn't attempt any micro sprints for the first flat part to get further ahead in the field.

The first climb came after just three kilometres and the field stretched out. I hung onto the back of the lead group for a while but then I had to let go.


Some ten kilometres into the race there were some downhill sections with roots and rocks which normally would not cause any problems but because it had rained they were slippery. I took it a bit easy here and had to let a few riders past. As the race progressed I did relax more and more and the downhills went quicker.


Towards the end of the first loop there's a section of quick gravel roads, then paved bike paths, and then also some asphalt road. Typically, if you're in a good group, this is a situation where the cyclists can really help each other to maintain a high speed by changing places up in front. However, this time, somehow, the group was just not working very well. A couple of guys would take good turns pulling the group, then all of a sudden when the next cyclist went to the front he would up the pace by 5km/h very suddenly. And another time a cyclist would come up the inside and start pulling before it was his turn. This sort of unprofessional behaviour really annoys me. It makes me think that perhaps I'm way down in the field with inexperienced cyclists (this actually turned out NOT to be the case)


The second part of the race - Climbs times five

The second part of Finnmarksturen is defined by the five climbs you have to get over. The first one starts right when you go out on the second loop.


There's a tricky passage where you pass under an tunnel which has stairs going both up and down. The organisers put wooden boards on the stairs to make it easy for us. However, going up just one part of the wooden boards actually had any grip, the second were slippery and so we all had to get off our bikes and push them.. Something happened with my bike right about here. I'm not sure exactly what but I think someone ran into my rear deraileur when I got off my bike to push it. When I got back onto it and tried to negotiate the climb that started right after the bike was no longer shifting cleanly. I dropped from the head of the group right back to being last while I adjusted my deraileur on the fly. I almost got it working well, but not perfectly. 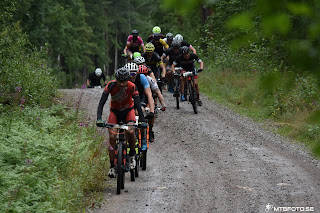 Going into the second to last climb the group was at least some 20-25 cyclist strong. The climb is on paved roads and I went to the front and pulled HARD. After cresting the hill I continued to accelerate in order to maintain any gap that I had created. Then I looked back: Only two cyclists had been able to keep up with me, one of them being my friend, Lars Hansen, who also races M40.

As we approached the last climb: Leos Backe, the group consisted of three M40 cyclists (Lars being one of them), and an Elite guy. Now I know this last climb feels like it goes on forever so I started up slowly. The Elite guy went ahead of the rest of us, then Lars, who created a gap down to me and the last M40 guy. As the climb progressed the gap to Lars started increasing and just after the crest I was able to sprint and rejoin his wheel. The other M40 guy was right behind.

After Leos Backe there were only some 5-6km to the finish line. The first part was on singletrack and here I went to the head of our small group and just gave it all that I had left. I managed to create a small gap to Lars and the other M40 cyclist. But just before going back on the last paved road section they were back on my wheel. I eased up and slowed down to rest for the sprint. We were some 2 kilometres from the finish line.

After the paved road there was just the last short section of singletrack before you enter the finish area. Here I went to the front again and pulled as hard as I could... And then all of a sudden the track markings disappeared: Somewhere I had made a bad turn.  Lars and the other guy had followed me. We stopped and everyone was very confused. After just a couple of seconds we made a U-turn, but Lars went one way and I another in order to find my way back to the track. I got back on the track after a small group of cyclists whom I recognised and knew I had left behind a long ago. In other words that small detour had cost me time. I ended up sprinting against them and went across the finish line first in that small group. Lars Hansen and the other M40 guy came in just a few seconds later.

I ended up finishing in fifth place, my best result so far in this year's Långloppscupen.

Posted by Alexander Lapajne at 15:36