Swedish Marthon Championships - How to start a race from dead last

The title says it all:  I 'punctured', on asphalt, about one kilometer into the race, before even leaving the starting area. Although it probably wasn't a real puncture. I inflated the tire using CO2 and then it held for the rest of the race. There was no leakage of Stan's fluid and no other signs of an actual hole in the tire. I didn't lose much time but because it was so early in the race the whole field went by me and I ended up dead last. I had a great day leg wise and moved up through the field finishing in 11th place (from dead last at 160th place overall to 50th place overall).


The venue for the Swedish Marathon Championships this year was a race called 1572 MTB Challenge. Normally it's 67km long but for the XCM they had extended the course to 90km. I had never competed in this race previously but I'd heard rumours of it not being very technical and pretty much a gravel road race. Expectations were not high in other words...


I got away really well and up a short grassy hill at the start I was in the top 10. I moved further up while we passed over some bike paths in the first kilometer and then onto a paved road. I noticed that Björn Österberg was next to me. Inpsite of the high pace I didn't feel I was exherting myself: It felt like it was going to be a good day.

Just a kilometer or so into the race, before we had even left the starting area (on paved roads) I noticed that my front tire was deflating. I got off the bike and quickly inflated the tire with CO2, then on the bike again. This didn't take many seconds but as it was so early in the race the whole field passed me and I was dead last.


I started advancing through the field and on the roads it was easy to get around people but on some of the singletrack I could do nothing but wait for space to open up where I could overtake. I was going hard at this point, deep into the red. I kept this up until I caught up with a group that had Martin Wenhov in it. I saw a bigger bunch of riders not too far ahead when there was a longer climb, but they were out of reach.

As the race is 90km long I realized that if I spent much more time at this intensity I would not be able to finish the race. I decided to stay with this group and to see what developed.


The group that I was in ended up being a good one. We held a good pace and picked up racers that dropped back from the front groups. After about halfway through the race it started raining quite hard and for the rest of the race it continued to do so.

Everything felt amazingly good throughout the race: My legs were like diamonds; When we got to a climb with 30km to go I just calmly went up it at threshold intensity and looking behind myself at the top I noticed that I had dropped my whole group by about 30 meters. This without even trying hard. The bike worked great and felt super in the descents and trickt sections. Even when the rain started and conditions got tricky I still felt confident and went hard on the singletrack sections.

With just a few kilometers left the group consisted of four riders; One of them being another M40 rider (in my category in other words). I managed to outsprint him and finished in 11th place in the M40 category. Overall I had moved up some 100+ places finishing in 50 place.


I had low expectations of this track as I had heard that it was just a bunch of roads but it ended up being quite fun. There were some good flowy singletrack sections. However the last perhaps 30km were almost all roads. If the race organizers could find some more fun singletrack there the race would be perfect. 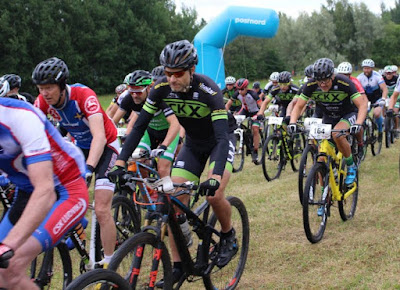 Posted by Alexander Lapajne at 06:52