I had been sick for most of the week, and spent most of the night before the race in the bathroom. That meant very little training for almost an entire week: I needed a high intensity workout. Had I stayed at home and gone for a ride in the forest I would've just felt tired and cranky. The best solution to get the right intensity was the local XCup race. I had some extra tissue paper with me if I had an emergency...

Unfortunately the race turned out to be a real mudfest. It had rained during the night and it rained during the race. The track is built on almost 100% dirt which turned to mud. Large parts of the track were not ridable at all. Lots of riders aborted halfway through.

It turned out to be a good high intensity session anyway. 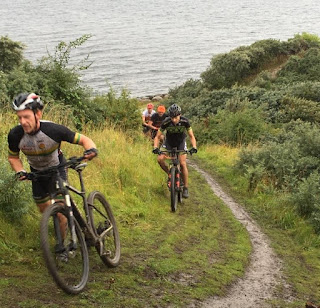 Posted by Alexander Lapajne at 09:57