Quick decisions before the race started


I changed the rear tire at the beginning of the week and mounted a Schwalbe Thunder Burt 2.10" Snakeskin. This is the lightest and most easy-rolling tire that I have. It fits this race as it's mostly gravel road. I had done two training sessions with this setup and the tire held pressure well.

Arriving at the race in the morning with  my travelling companion Daniel Grass there was plenty of time to warm up and then put my bike in the box an hour before the start. I decided to ride the gravel road part of the start of the race that leads to the first climb. I had done about 4 kilometers of my warmup when I heard a hissing sound from my rear tire. I stopped and had a look. Air was leaking out of a hole in the center of the track and I saw pink tubeless fluid squirting out. However as soon as the pressure dropped a bit the leak sealed itself.

Quick decisions were on order. As I saw it I had two options: Either throw in a tube or inflate and hope for the best. I decided to go back to the car, fill the tire with a bit more tubeless fluid and then inflate it back to 1.6 bars to see if it held. Good thing we got the the place early!

There was a bit of bubbling when I inflated the tire again but it held air. I put my bike in the box and checked it just before the start and still no leak. So... things were under control... or were they?

The race started... we were on the gravel road... And after 3 kilometers I feel my calves getting splashed by something. For a brief moment I wondered if it had started raining. I looked down: Pink tubeless fluid all over my legs. I wondered how it must've looked to the cyclists behind me. I'm guessing they were getting splashed too. Still, as before, the leak sealed itself as soon as the air pressure in the tire had dropped just a little bit. I kept going and the tire felt normal... no strike through or weird behaviour in the corners.

Here I'm thinking: I'll ride until I start feeling the tire bottoming out over roots or rocks and then I'll stop and inflate it using CO2. This is a bit of a stressful way to do a race however as all the time you're thinking: Is my rear wheel behaving normal? Did I just have a strike through? Did it was out in that last corner? Everything seemed okay however.


Engelbrektsturen has two climbs following eachother 4 km into the race. I like climbs so here I go all in. As per usual the first bit of the uphill I'm pretty much going as fast as everyone else but about halfway up people around me get tired and I start advancing. I pass Robert Eliasson at some point (there's this great photo of both of us going up the climb)

I also pass the M50 dominant Stefan Carlsson who I will be racing against next year when I also join that age category. He tends to be a slow started but when he gets going he's unbeatable.

At the top of the second climb I've left a big group of riders behind me and I see two lone riders ahead of me. I quickly sprint up to them and we form a group of three. However there's no will to go hard here and soon we're joined by the group that's chasing us.

Engelbrektsturen is an incredibly quick race. Mostly gravel roads. Sure, some singletrack, but even that's really quick and flowy. During the race I was thinking that it almost felt like watching a video in fast forward.

Our group catches up with Daniel Grass and three other riders quite quickly and so we grow a bit more. I think there were probably around 20 of us at this point. Daniel has been doing really good this year with several podium finishes in M40 so I'm thinking that the fact that we caught him (and have Eliasson and Carlsson with us) means that I'm probably in a good position.

In a messy section we catch Erik Mattelin, who races in the Elite category, and usually is much quicker, but seems to be having some problem with his bike. The problem is that Robert, Daniel and a few other riders manage to get around him while I and the rest of the group behind me, get stuck. After I manage to pass Mattelin I go all in in order to catch the runaways and manage to do so on the next climb. Legs feel great and I fly up the incline! 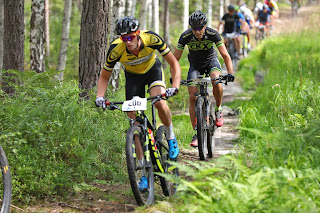 I'm still unsure about the status of my rear tire but I feel no strikethroughs. In a messy section with about 12 km to go I have to let Eliasson, Carlsson and a couple of riders go again because I'm unable to take the turns quickly (could be my rear tire was washing out a bit there). Daniel is stuck behind me and politely asks if I can let him pass. I tell him there's no way as it's just too narrow. He jokingly says that I'll have to walk back home after the race (we had taken his car north).

After this messy section, going back on the gravel road, I pull hard in order to catch up again and also because I have a slightly bad conscience for holding Daniel back (I try to pull him back up to the guys who've left us). After a while Daniel goes around me and covers the rest of the distance but I'm too tired to follow. I'm still left with the rest of the group on my wheel.

With about 10 km to go in one of the last climbs I feel a cramp developing in my right leg. The muscle spasmes but the cramp doesn't develop fully before we're back on the gravel road. I ride with the rest of the group to the finish but I'm unable to sprint strongly and finish last with two M40 riders ahead of me.

Final position: 8th in M40. 36th overall. This is the best overall position that I've had in Långloppscupen all year. I'm pleased.

I'm 30 seconds behind Daniel Grass in fourth place and two minutes down on second place in my cat.

Power and heart rate were good: 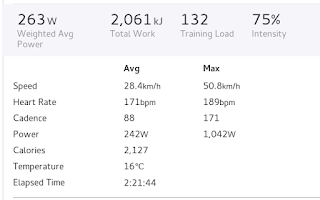 I check the air pressure of my rear tire after the race: It's 1.03 bar. I started off with 1.6! The rear of the frame is splashed with tubeless fluid. When I later try to clean the bike I notice that the tubeless fluid has fused with the dirt and I have to use alcohol to get it off the bike. 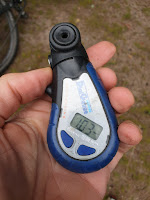 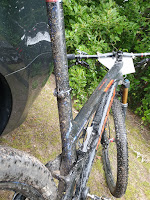 Posted by Alexander Lapajne at 14:26