Finnmarksturen aka Swedish XCM Champs - Run over, run down, and crashed

Yeah, it was hot. Already arriving at the hotel on the evening the day before the race it was hot. And it got even hotter on race day. I don't really have a problem with hot races, just as long as I get enough to drink. I placed out two bottles halfway through the race. I thought I would probably need one extra bottle as I was expecting to race for about 3 hours.

The race, Finnmarksturen, is a regular  part of the Swedish Marathon Cup ("Långloppscupen"). This year they got the extra honors of also hosting the Swedish XCM Champs. The course had been extended from the regular 72 km to 80 km, mostly ny adding singletrack.

I was in good spirits: I knew my form was good. I had actually done my race-prep the day before by taking three Strava KOMs. Maybe a bit too hard though for the day before a race? I was about to find out...

I managed to find a good spot on the grid and as the race started I managed to stay with the leading group all the way up the starting climb and until we veered into the first singletrack segment. I remember from 2017, when I last did this race, that I had lost touch with the leaders before getting to the top of this first climb.

There was some gravel road after this where things settled down and I was able to look around: The usual suspects were there: Robert Eliasson and Stefan Carlsson. After a while we also caught up with Daniel Grass. This were looking a lot like a repeat of the previous weekend's race in other words.

Run off the track and crashed

At about 25 km into the race we were going downhill on narrow singletrack with a bunch of roots. I was in the middle of a group of perhaps 10 riders. I had let a small gap of perhaps 5 or 10 meters develop to the rider in front of me. All of a sudden a rider start trying to pass me from behind but there's not enough room for him to get by. His passing on the left but his handlebars get tangled up with mine and we both go down. I hit my left leg rather hard and I'm unable to get up or even push my back out of the way. He gets up and keeps going without even saying "sorry". I take a couple of minutes to let the pain pass. Then I start inspecting the bike. The front wheel has rotated 180 degrees and the brake levers are all twisted. I manage to get everything sorted and get back on the back. Two or three groups have passed. My mood is rotten, I'm pissed off, and my motivation to perform well has just disappeared. I think about aborting the race but decide to go on for a while and see what happens.

I find a new group to join and we go past the halfway point of the race into the second loop which consists of a number of climbs. I still feel unmotivated but at this point I decide that I'm going to finish the race. The problem here, when my mood turns bad, is that I get sloppy with taking my gels and picking up my spare bottle. I decide to get by on the bottle that I have and just pick up the extra drinks that we get at the feeding stations. This turns out not to be quite enough and towards the end I'm all out of water and REALLY thirsty in the blazing heat.

Going up the lats climb (Leo's hill) I pass three M40 cyclists and feel good about that. However just after there's some rough terrain and they manage to catch up and pass. With 4 kilometers left we get out into a short asphalt section. I decide to go all-in here and blast past all three riders so quickly that they're note even able to take my wheel. I pass the finish line in 12th place in M40. I guess I've done what I could with a bad situation. Daniel Grass (who I was with when I crashed) places 5th in M40, Robert Eliassson comes in 10th place. 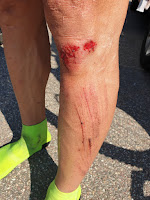 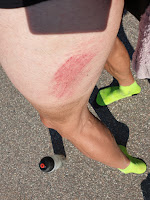 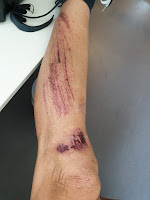 Posted by Alexander Lapajne at 12:48