Swix Uddevalla MTB is another first-time-ever for me this year (as was Kolmårdsbiken earlier this year). I really love trying out new races for the first time. I love the feeling of the unknown and of a new adventure.

Checking out the stats are results from previous years told me the race was a quick one with average speeds close to 30km/h. The length of the track was 68 km. Also a lot of Norwegians take part. The location is close to the border with Norway. I had to drive some 360 km to get there but that was okay as I can do that in the morning (race start was 11:00) and I don't have to book a hotel stay.

In advance I asked my pal Robert Eliasson about the race (as I could see in the results that he had several good placing from previous years). He told me that the track was quick and not very technical. Perfect for me in other words.

I got in touch with the race organizers in advance and asked them if they could seed me with the front group and they quickly replied that they could and gave me a starting number of 36. This turned out to be very fortunate as there were 40 of us (race number 1-40) on the front line... And then some 900 racers behind!

No age categories or classes in this race: Everyone competed with everyone else.

I saw Robert Eliasson at the start and we warmed up together. He was also seeded among the 40 front starters thanks to his previous results in this race.

The start was a bit special. We lined up in a wide line 40 of us top-seeds. Behind us were all the hundreds of the other racers. There were motorcross-type starting blocks which lowered as the starting gun sounded. I had no idea what I had to expect or how the first part of the track went. As I left the line I noticed that it all started on an actual motocross track and with a wide left turn... And I was all the way on the right hand side due to my seed of 36. This meant I had to take a wide left turn to get through the turn and a bunch of riders slipped in between. Then we were riding on an actual motorcross track for the first kilometer or so with sandy tight turns. It was pretty chaotic and I was far behind the leading guys... probably in place 60+.

As we left the motorcross track we got on gravel roads and I started advancing through the field. I overtook riders left and right. I wondered if I was too far behind to ever catch up with the quick guys. Robert was so far ahead I couldn't even see him.

Then, as I thought I was going really quickly up the field, a funny thing happend: A slim young guy in blue kit passed me! "Darned!", I thought, and here I was thinking that I was the fast one. I immediately latched on to the young riders back wheel and he helped pull me up the field. This pace got really murderous and I was in the red for a long time just hanging on to "young guy". But then, after perhaps 20 minuters of passing slower riders, a miracle: I could see a small group of riders ahead and one of them was Robert!

When we caught up with Roberts bunch we formed group of some 10+ riders. At this point I realized that I had been in the red for a long time and that I needed to catch my breath. However "young guy" immediately went to the front of the group and on the next short climb he pulled hard (he did this on all the climbs) and I gave in to my impulse (instead of following reason) and got right on his wheel and pulled hard up the climb. I lost Robert at this point and didn't see him again until after I crossed the finish line.

The terrain that followed can be summed up as a mix of gravel roads, quick single track, short climbs, quick and tricky descents. Even though the terrain is technically easy the sheer speed at which you're going makes the riding difficult and tricky. There's a lot of loose gravel and rocks and many tricky turns. If you brake you lose ground and need to make it up again. It's definitely not a race which can be dismissed as technically easy as the speed makes it hard. In that way it's quite similar to Lindingöloppet MTB (and nothing like Wasaloppet MTB).

Going up all these short climbs felt great and I kept going to the front of the group and pushing hard (together with "young guy"). There was also an older rider in yellow kit who took a lot of turns at the front. He seemed very strong. After about half way through the race there were 8 of us left in the group. Pace was high and we picked up single riders who had dropped off the leading group from time to time. No one caught us from behind,

As we were approaching the 50 km mark there was a point at which three riders got a bit of a gap. At that point I was at the back of the group and had to sprint hard to catch up with them. Just as I did I noticed that we had just gotten to a climb. What I didn't know was that this climb was the only long climb of the entire race. It was really long. Having just gone quite hard in the section leading up to the track I had to let four riders go as I couldn't match their pace uphill. Behind me the other tree riders also dropped back. After the climb I looked around and noticed that I was alone with some 15 km left to the finish. I decided to wait for the other three riders to catch up.

Cramping up Towards the End

As our group of four formed we went quite hard at first but then noticed that we were not catching the four riders who had gone ahead. We settled back a bit but the pace was still high. At 10 km left I started having some feelings of almost cramp in my left thigh. I noticed that I could not stretch the leg fully without risk of developing a fully blown cramp. I could still keep up with the group however. Then just a couple of kilometers later (8 km to go) suddenly I got a real cramp in my right thigh muscle. It wouldn't go away and I had to stop for a few seconds. I screamed out in frustration and pain.

After standing still for a minute or so the cram went away and I was able to ride on. Of course my group was gone.

Typically in these situations, when you lose your group towards the end of the race, it's really hard to keep up the pace. You have no way of judging how quick you're going and it's easy to lose motivation and focus. I knew I had to get the last 8 km to the finish without allowing the chasing groups to catch me. Eight kilometers is quite a long way to go solo. I got on with the job and soon noticed that I could see the other three riders ahead of me as soon as I got to a climb. That meant that I wasn't going too slow. I was never quite able to reconnect with them but crossed the finish line just 30 seconds behind them. Funnily enough the next rider that crossed the line behind me was Robert. I finished in 15th place overall and that seemed like a good result. 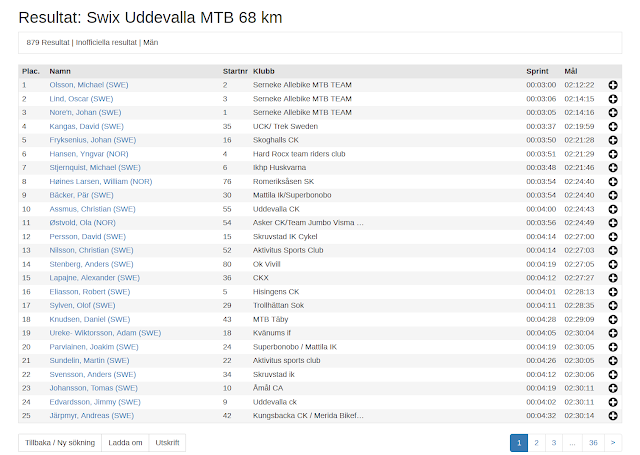 Posted by Alexander Lapajne at 14:13