The situation in the general standings before today's stage was that I was in third place in my category, some 25 minutes behind the second place guy, and the guy in fourth was about the same distance behind me. Now, baring disasters there was no way anything was going to change. This means I could take it sort of easy and not feel stressed during the last stage.
The weather had changed MASSIVELY. Instead of sunshine and 20+ degrees C it had rained all night and the temperature had dropped 15 degrees. We were told that it was 4 degrees C at the top of the  mountain. I dressed accordingly with long sleeves and a wind jacket.
Funny thing about brakes in Beskidy is that they wear out really quickly. At home I can ride on a set of brake pads for most of the year. At Beskidy I had put on new pads before leaving Sweden and the morning before today's stage I noticed that the rear pads were worn out. I had to change them.
The stage started with a really long climb of 15km. I put the power meter square at 280W and held it all the way up. It felt good and this feeling stayed during most of the stage's climbs. I never had to really push it even though I did all four climbs between 260 and 280 average watts.
I was a bit worried about the downhills due to all the rain that had fallen during the night. And it was quite muddy in places but after four days of riding this technical terrain I felt confident and relaxed and descending was easy. I got off the bike in one single place where part of the downhill went through what can only be described as a rockfall. As far as I can tell no one rode that.
It's a good thing that the bad weather and poor conditions occurred at the last stage when I had become used to the extreme terrain.
During the second to last descent I actually caught up and overtook about 5-6 riders from the Classic distance and that felt really good.
The last descent just before the finish line was the same one as we had done in the prologue. The one that I was so nervous about after testing it before the race (scroll down to the bottom of this page to read about it). This time it was also slightly muddy. But it went great! I caught up with a guy at the bottom and he seemed a bit stressed by the fact that I was behind and ended up crashing (very mildly, he was okay). I ended up doing this particular section one minute quicker that in the prologue when conditions were dry!
I crossed the finish line for another third place.
This also means that I came third in M50 in the end results of the race. The nice thing is that I get a free start in the next edition of Beskidy! 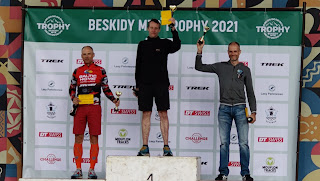 Four hills to climb -> four uphills and four downhills.
First hill: I went relatively hard uphill and had my eye on Calle and Per all the way up. They disappeared during the downhill. The downhill was fairly steep and continuous so I managed to overheat the rear brake again (had no problem with overheating at all yesterday). I ended up using only the front brake towards the end of the downhill and so therefor I had to go a bit slower. Got passed by a couple of cyclists.
Second hill: Felt the weakest during this uphill. Don't know why. The downhill however was in a bike park with built track and obstacles and jumps. The first part was okay. But then it got crazy steep and I ended up getting off the bike and walking some of the dangerous stuff. I really hate it when I have to get off the bike because once I've crossed that threshold it's easier for me to chicken out the next time and do it again. By comparison on yesterday's stage I didn't have to get off the bike even once.
Third and fourth (last) hill: Uphills went much better than the second hill and I managed to average about 260W. Downhills went well too and had no problems with the brakes.

Stage 2 was the first real stage of the race with 56 km of riding and 2400 m of climbing.
Even before the stage even started there was drama. One hour before I needed to be in my box I started riding towards the starting area and I noticed that my gears were not working. I turned back to the hotel, dismantled the shifter and was met with this:

The shift cable had (almost) snapped in the shifter and was all frayed up. I pulled it out (wasn't easy) and replaced it with a new one. My good friend Calle Nelson assisted me and without him I think it would have been really close if I had made the start. Now I was in the starting area with about 15 minutes to spare.
My good pal Per Henriksson leads my class and as the race started I had an eye on him and also on Calle who was in fifth place in M40. Up the first climb Calle and I slowly approached Per and then passed him. I set my eye on the power readout and tried to stay around 300W with a H/R of about 165-170bpm.
As the first downhill started Calle passed me on the right and went downhill like his hair was on fire. That guy can move downhill! I had a minor crash as the trail turned onto a road in a tight left turn; My front tire lost grip in the lose gravel and I bit the dust. Got up, re-aligned the handlebars and I was off again. Per caught up a little later but I was able to get on his wheel and follow him downhill.
Up the second climb I rode together with Per but just before the end of the climb there was a severely steep section where I made the decision to get off and walk while Per continued on the bike. He got a bit of a gap and I was never able to close it again.
Had a second crash at the top of the mountain where my left pedal stuck on something in the grass and I went flying over the handlebars. No damage done and I was back on the bike in a few seconds.
Downhill went well. I felt brave today and did the downhills quickly so I'm pleased with that. Not once did I get off the bike to walk. I really love the control that the dropper post gives me. I use it A LOT here.
Last climb was soooo slow. I was looking down at my power numbers and they barely went over 200W. The only thing that lifted my spirits somewhat was that everyone around me seemed just as tired.
Last downhill went quickly but I got into another minor crash in a really steep section. No biggie though. Crossed the finish line and saw Calle and Per waiting for me. Had some cake!

I did the long climb fairly easy. It took 41 minutes all in all at 298W and 169bpm H/R.
What I am however the most proud of is the fact that I did the whole difficult downhill section without getting off the bike!! 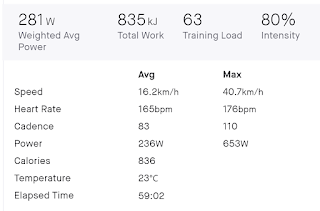 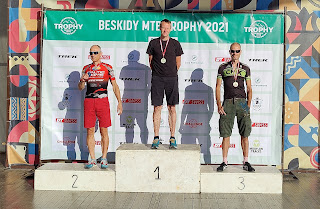 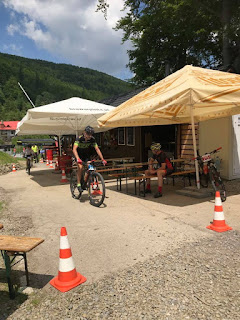 That's right! It's really happening! Beskidy Trophy is on for 2021. And it starts... TOMORROW!

There was a bit of last-minute drama as you can see in the photo; The battery of the Honda had fully discharged and it wouldn't start (I almost never drive anywhere anymore so the car sits for weeks). My neighbor, Jörgen, helped me out however and we got the car started.
The bikes: BMC Fourstroke One 01
I'm going to race on the black one (which has mechanical gears, the red one has electronic)
The tires: Maxxis Aspen 2.2" (weight: 640 gram)
I'm going to write a complete piece on the bikes... soon...
The nice thing with the BMC Fourstroke is that it has a built-in dropper post from the factory. Only a 70mm drop but it's enough. I think it's going to be very useful in the terrain here.
I arrived in Poland yesterday (Tuesday). With the pandemic going about I had to do a Covid test, of the Antigen kind, in Sweden so that I had a certificate to show at the Polish border. I did the test, got the certificate showing a negative results, and then NO ONE CHECKED IT AT THE BORDER!? 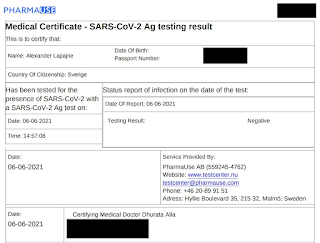 After arriving on location I managed to get my bike ready and then met up with my two friends Calle and Per (who are also racing) for a short test ride. 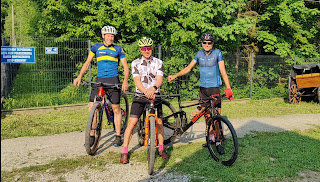 This year the venue changes racing village from Istebna, which they've used all the previous years (is it 5 now?) that I've participated in the race to a nearby village called Szczyrk. Go ahead and try to pronounce that! The change is good as this village is bigger and more touristy. It has more small shops, restaurant and the hotel that we're staying at is much bigger (nicer buffé).

I'm writing this Wednesday and the race starts tomorrow. The first stage is a shorter prologue stage of 16km with 700 meters of climbing. One big climb and one big downhill. Everyone starts in a single start time trial fashion. Actually three riders start at a time with a pause between groups. There's no seeding and we're just starting ordered by last name. So that will be interesting...
I test rode the stage this morning. The climb is pretty much what I expected: First a short stretch of asphalt, then gravel road, then forest road. However the descent is a bit more extreme than I had expected. There's a section that is extremely steep, has these big stones that move around and the trail is really narrow. I used the dropper on the descent to get nice a low but managed to overheat the rear brake. It's going to be interesting to see if some riders jump of their bikes to walk that section and what kind of congestion that could lead to.

Posted by Alexander Lapajne at 13:31